Politics Insider for April 1: Rent is due across the nation, Trudeau announces $2 billion for medical equipment and China drops its ban on Canadian canola imports 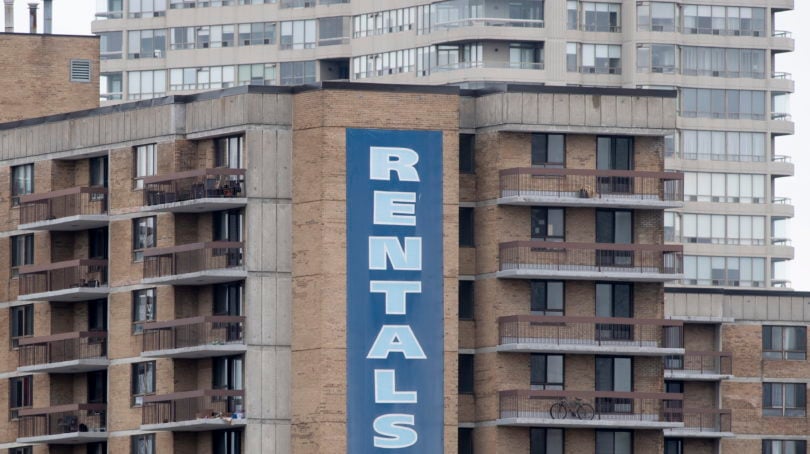 A rental sign hangs on the side of an apartment building in Ottawa on Tuesday March 31, 2020. (Adrian Wyld/CP)

Finally, March is over. The longest month anyone can remember ended at midnight, but one person’s relief at having endured a horrible few weeks is another person’s anxiety about what happens tomorrow. Today, residential and commercial renters across Canada owe their landlords a monthly payment. Many can’t pay, and they’re desperate for relief.

A new survey from the Canadian Federation of Independent Business says 23 per cent of the more than 9,000 respondents can’t pay their rent or mortgage today. Eighty-six per cent say governments should help small businesses cover these costs. Two-thirds say provincial governments should do more to prevent eviction. Less than one-third say their landlords are being “reasonable.” The feds have opened up billions in cheap credit for businesses, but most CFIB members say they can’t afford to take on more debt.

A grassroots coalition of more than 20,000 small businesses—formed just over the past two weeks—also published a survey that 38 per cent of the coalition couldn’t afford rent in April, and a staggering 70 per cent would default in May. When Maclean’s asked Trudeau about rent relief at one of his daily press conferences this week, he didn’t reject the notion, saying his government “will continue to listen and work with people to make sure that we’re able to come through this as strongly as possible and get out the other side as strongly as possible.”

Ottawa has moved to waive certain rent: the feds are letting 21 airports, which are in their jurisdiction, off the hook until December. But anyone who’s ever run into rent trouble knows when tenants and landlords fight, they don’t appeal to the federal government. Provinces have the ultimate say.

NDP leader Jagmeet Singh wants the government to do more. “We’re calling on the government to work with provinces to implement rent and utility payment freezes, and an eviction ban,” read a party statement. “The federal government, for its part, should use its power over the financial sector through the Bank Act and the National Housing Act to freeze mortgage payments to give homeowners and landlords the same assurance, as well as waiving interest rates on credit cards and other loans.”

Will Canada respect its renters now? Governments need to think about the legions of tenants across the land, now more than ever, writes Max Fawcett in Maclean’s. The feds have tailored pandemic policy to big business, small business, the unemployed and homeowners. But what about renters?

Being ignored by policymakers is hardly a new experience for Canada’s renters. Like most western countries, Canada and its constituent governments worship at the altar of home ownership,” he writes. “There are few issues in our country upon which Liberals and Conservatives (and even many New Democrats) will happily agree, but the valorization of homeownership—and home owners—is one of them.

Jane Philpott, the former Liberal cabmin who’s currently taking long shifts at a COVID-19 assessment centre at the Markham Stouffville Hospital, writes in Maclean’s that politicians “should be obsessed with protecting the health workers who will keep people alive.” Philpott says the recruitment and retention of health workers “hasn’t been this important in Canada for at least a century. We need to expand the health workforce and this requires some creativity.”

To mask or not to mask: The official advice from Canadian public health officials says wearing masks is not necessarily helpful in the fight against coronavirus. You don’t have to go far on social media to find dissenting opinions. In other countries with flattened curves, they argue, people everywhere wear masks. Stephen Maher took the mask debate to experts.

Oh wise and wonderful Trump, help us stop the coronavirus: Andrew MacDougall writes in Maclean’s that berating the U.S. president will get Americans nowhere. The solution? “Forget social distancing; in this time of crisis Americans need to ram their noses up Trump’s backside.”

Ralph Goodale, a Liberal lion of Parliament whose 26-year run as a Saskatchewan MP and longtime cabinet minister ended last October, has been called off the bench. Trudeau yesterday appointed Goodale a “special advisor” on the Flight 752 disaster. His role: “develop a framework to guide Canada’s responses to international air disasters and provide recommendations on best practices, including advice on tools and mechanisms needed to prevent future events.”

Reuters reports that China, which banned imports of Canadian canola in March 2019—they said due to quality concerns, critics said as retaliation for Meng Wanzhou’s arrest—has dropped the ban. The newswire had two sources who said yesterday’s deal was “reached on a conference call held by the two sides.”