Tory leadership candidates will debate each other twice

Politics Insider for Feb. 27: A hint of what's to come on Coronavirus, Global Affairs unleashes data on MPs and our big profile on Nenshi 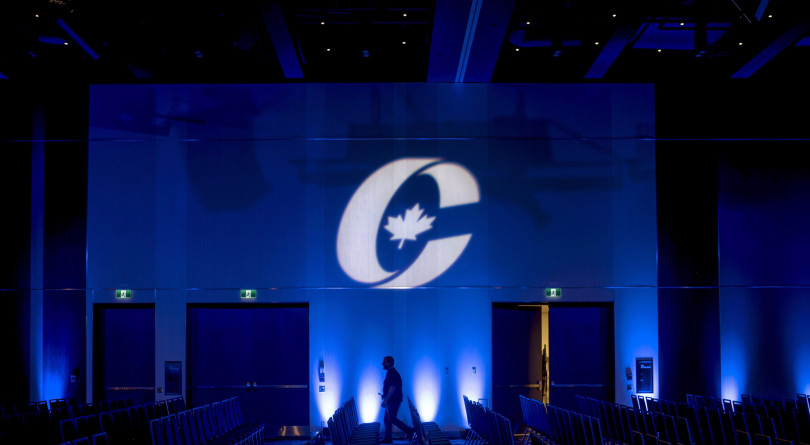 A man is silhouetted walking past a Conservative Party logo before the opening of the Party's national convention in Halifax on Thursday, Aug. 23, 2018. (Darren Calabrese/CP)

Wet’suwet’en hereditary chiefs and Indigenous Services Minister Marc Miller will, after some uncertainty, meet today. The area’s former NDP MP who brokered the talks, Nathan Cullen, is acting as a mediator between the Wet’suwet’en, the Mounties, TC Energy, the feds and the provincial government. Not an easy job.

Canada’s deputy public health officer, Howard Njoo, gave parliamentarians a hint of what might be to come if the COVID-19 outbreak that’s spreading around the globe advances into a pandemic. “Do we need to start looking at cancelling certain mass gatherings or public events … what we need to be doing with schools, students attending schools and people sick in the hospital, and so on,” he told the health committee, emphasizing Canada isn’t there yet.

Tory debates: When the Conservative party last picked a leader, candidates endured a gruelling debate schedule: 16 debates in six months (Erin O’Toole attended all but the last one). This time around, the party has taken a new tack: a single English debate in Toronto on April 17 (which just so happens to be the anniversary of Canada’s repatriated Constitution), followed a week later by a French debate in Montreal on April 23.

Global Affairs Canada published a comprehensive assessment of the CUSMA trade deal (sometimes known as the “new NAFTA” around here). The analysis compared the new trade deal to a scenario, which often seemed plausible, in which U.S. President Donald Trump terminated the agreement. Conservative MP Randy Hoback complained that MPs only saw the document minutes before a committee meeting—and that a more useful analysis would compare the new deal to the old one.

A second Global Affairs analysis, this one released to parliamentarians on the Canada-China committee, offered a glimpse into diplomats’ thinking as Canada’s frosty relationship with the superpower continues to evolve. The paper says Canada is at a “fundamental juncture” with China, as the latter’s treatment of Michael Kovrig and Michael Spavor has shown its “readiness and ability to use aggressive political and economic levers to punish Canada.” There’s a big emphasis on continued dialogue, the word of the moment for the federal government.

Naheed Nenshi falls back to earth: Few journalists have followed Calgary’s mayor as closely as Jason Markusoff, who spent five years reporting on Nenshi for the Calgary Herald before making the move to Maclean’s. The mayor sat down for a candid interview with Markusoff partway through a gruelling third term in office—part of an in-depth profile for the magazine.

Nenshi’s approval ratings, once the envy of Canadian politicians, are underwater. While he says he doesn’t pay attention to such figures, other things have worn on him. “I feel like 2019 was the worst year I’ve experienced in this job,” he says. “There were days, especially in the middle part of the year, when I was kind of going: ‘What am I actually accomplishing here?’ ”

Conservative MP Arnold Viersen has sponsored a new e-petition that calls for the total eradication of federal funding for all media companies in Canada. A journalist could, ironically, spend a whole day fact-checking the claims in the petition’s numerous whereas clauses.

She’ll be Beyak: Independent senators, by far the largest organized group in the Senate, want to suspend Lynn Beyak even though she apologized “unreservedly” for posting racist letters on her website and defending their presence there. Yuen Pau Woo, the so-called “facilitator” of the technically leaderless independents, said suspension is routine in workplaces where people undergo remedial training—which Beyak has agreed to.

Public Safety Minister Bill Blair will face MPs at committee this morning. They’ll ostensibly talk about federal spending under the minister’s purview. Here’s the easiest prediction in the world: Blair will face a grilling from Conservatives and New Democrats. Also at committee this morning: the heads of the Mounties, Canada’s spy agency, border services agency, correctional service and parole board. All in just two hours.

We made a mistake: The Parliamentary Budget Office, which we said was releasing its “Fiscal Sustainability Report 2020” yesterday, is in fact releasing it this morning. We still think it will generate a headline or two. Yesterday, the PBO did publish a detailed analysis of the government’s second supplementary estimates for 2019-20. Dig into the numbers here.