Transcript: What Stephen Harper said in his final farewell 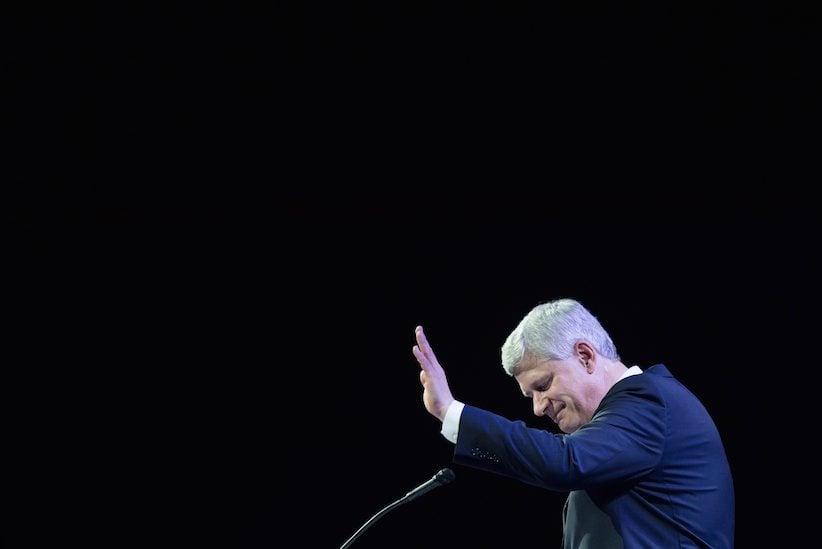 Former prime minister Stephen Harper waves as he steps away from the podium after addressing delegates during the 2016 Conservative Party Convention in Vancouver, B.C. (Darryl Dyck, CP)

Former prime minister Stephen Harper spoke to party faithful at the Conservative Convention in Vancouver last night. What follows is a transcript of those remarks:

Merci beaucoup. Thank you very much, everyone, for that tremendously warm welcome. Bonsoir, chers amis et salutations à notre belle et grande famille conservatrice. Greetings to our Conservative family here in Vancouver and all across our great country. (Applause.)

Laureen and I are so pleased to be here tonight, and we’ve heard from so many of you in recent months, and we want to thank you from the bottom of our hearts for all of your encouragement and your good wishes over this period.

Now friends, I don’t plan to spend long on the stage tonight. I’m kind of enjoying being off centre stage.

So let me begin just by thanking each and every one of you, all of you who are here in Vancouver for this convention. In coming here and joining with your fellow Conservatives, you are building for the future—for the future of this party, our party and for the future of our great country. (Applause.)

Because let me tell you friends, at this time in our history and in the days to come, plus que jamais le Canada aura besoin d’un Parti conservateur fort. This country is going to need a strong Conservative Party of Canada more than ever before. (Applause.)

And friends, just as our founders did when they came together to unify this land from sea to sea to sea, we Conservatives take the long view. While the election last fall did not yield the results we hoped for, le fait demeure notre parti a connu un succès remarquable au cours de la dernière décennie.

The fact is our party has enjoyed a remarkable era of success. (Applause.) In fact, let me just put it in this context for you. For the first time since Sir John A. Macdonald, for the first time in over a hundred years, a longstanding Conservative government, even in defeat, has emerged strong and united, the one and only opposition party positioned to take the government the next time around. (Applause.)

Related: Stephen Harper’s exit: One last thanks to the party faithful

It was thanks to you that we were able to get tough on crime and protect victims, to rebuild our military, to vastly expand Canada’s global free trade access, to witness the decline of Quebec separatism and western alienation. (Applause.)

And it was thanks to you that we were able to stand up as a country and take principled positions in a dangerous world. (Applause.)

And friends, as I look out on this great crowd tonight, I see the energy, I see the passion and I see the deep abiding love for our Canada that will propel you forward to an even brighter future in the next election. (Applause.)

It was this same energy that brought us together some 13 years ago in this, the modern Conservative Party of Canada.

Friends, many, many tens of thousands of individuals deserve thanks for their efforts, for your efforts throughout those years. Let me just say first and foremost that as leader I was blessed to work with the most talented, dedicated and loyal parliamentary caucus that I think any leader in this country has ever had. (Applause.)

And I would ask all of our parliamentarians, past and present, to rise and be recognized for their outstanding service to our great country. (Applause.)

Also friends, no caucus, no cabinet and certainly no Prime Minister can be effective without capable, committed staff. Over the last decade, literally thousands of individuals have worked for our Conservative team, whether on Parliament Hill, in ministers’ offices, the Prime Minister’s Office or at our party headquarters. I know many of you are also here tonight. Yours was often thankless work requiring heroic energy and inexhaustible patience.

Without you, our 10 years of accomplishments simply would not have been possible, so let’s give a big thank you to all our staffers. (Applause.)

This allowed us to move away from corporate money, from union money, from big money, and also, yes, to significantly reduce taxpayer subsidies and to finally create a genuine grassroots-based fundraising system—a system, friends, where those who give can have no expectation other than a shared desire to advance our values and to build a better country. And friends – (applause) – and friends, this is important. Irving, Louis and the other members of the fund have done something without precedent. Even after an election defeat, we remain significantly the financially strongest of all of the parties. So a big hand to the members of Conservative Fund. (Applause.)

Of course, the fund supports the critical work of our party’s national council. As leader and Prime Minister, I benefited enormously from the professionalism, the discretion and the commitment of the men and women chosen by you here at conventions to serve on our National Council. And I know we all want to extend our thanks to all members of our National Council, past and present, for their service. (Applause.)

And forgive me, friends, if I single out one member in particular for his friendship, his outstanding work, and his loyal service to our organization over many years, our outgoing president, Mr. John Walsh. (Applause.)

And friends, just as John has steered our party through this time of transition, so, too, has our outstanding interim leader, the Honourable Rona Ambrose. (Applause.)

Rona, in a short time, has become one of the most effective opposition leaders this country has ever seen. She is doing a great job, a great service for our party, for our caucus. So one more big hand for outstanding interim leader, notre chef, Rona Ambrose. (Applause.)

Related: Stephen Harper: ‘Our party’s journey is only beginning’

And friends, let me wind up by thanking those particularly close to my heart.

Every year, I told my riding that I couldn’t do what I did in Ottawa unless they did what they did in Calgary. To our friends, the board, the volunteers and members of Calgary Heritage, for your years of devoted hard work, I thank you very, very much. (Applause.)

And of course most importantly, I want to thank my family. Whatever a person pays for being in public life, and frankly, I always found it far more of an honour than a burden, nevertheless, a bigger price is paid by those closest to them. I can never properly thank my late father, my mother, my brothers, and their family, of course, Ben and Rachel, and above all my best friend, my closest counsellor and the love of my life, Laureen. (Applause.)

You know friends, I have tried to devote the majority of my working life to making Canada a better place for hard-working families. My family made that possible. So thank you Laureen, Ben and Rachel, for everything. Let’s give them one more big hand. (Applause.)

Friends, chers amis, nous avons un bilan dont nous pouvons être fiers. We have a proud record, but frankly, the past is no place to linger. Now is the time to look forward. Our party’s journey is only beginning. Millions of Canadians entrusted us with their votes, and I know in the months and years to come, you will work hard to secure the votes of millions more. I know you will continue to build our organization from coast to coast to coast.

And friends, I know you will continue the critical work of reaching out to new Canadians and bringing them into our party at all levels. It was one of the outstanding achievements of the past decade, and that work must continue.

Related: Where do the Conservatives go from here?

And, I know, friends, that throughout all these efforts, ours will continue to be the party of those who work hard, who play by the rules, and who are struggling to raise a family, in an uncertain world. Ours is the party that knows hard-earned dollars are better spent by families than by governments. (Applause.)

We are the party that knows as well, friends, that this country, with all that it has, this bastion of freedom and human dignity, even if it means you cannot be all things to all people, this country must stand for something in the world. (Applause.)

Friends, our party, the party that you have built over the last 13 years, is strong today, and it will be even stronger in the future. In a year, you will select, from among many outstanding candidates, a new leader, and you will unite behind that person because in 2019, perhaps more than we understand even now, our country will need a strong, united, Conservative Party ready to govern. (Applause.)

It will need a party driven by hope, by hard work and by higher purpose, that Canada can be and must always be, the best country in the world, and I know you that you will succeed, and that for our party and for our country the best is yet to come.