Trudeau and Biden: Getting to know all about you

Paul Wells: A Trump re-election would not have been the Trudeau crew's preference, but at least it would have represented a continuation of a known set of hassles and trials 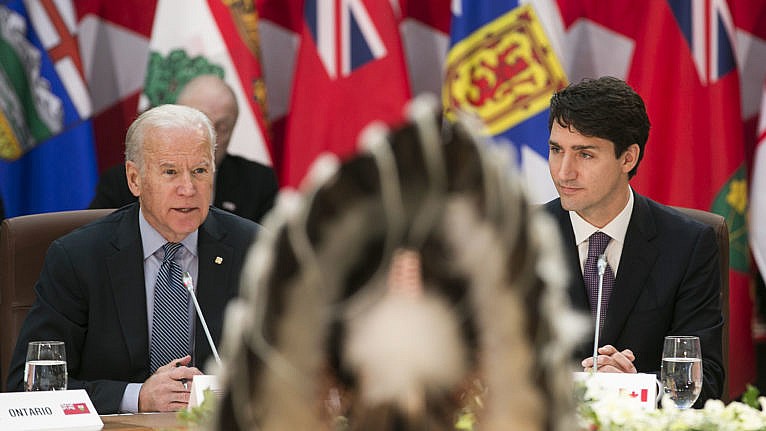 Justin Trudeau’s Jan. 26 phone conversation with John Kerry, the Biden administration’s new Special Presidential Envoy for Climate, was overshadowed by calls the prime minister made earlier (to Joe Biden, two days after the inauguration) and later (to Vice-President Kamala Harris, on Feb. 1.) But if you want insight into how the Canadian government plans to work with its new American counterparts, there may be no better place to start than the Kerry call.

First, there’s the fact the call took place at all. Of course Trudeau would call Biden; snub-conscious reporters in Ottawa keep stopwatches handy to measure any telling delay in opening pleasantries between a Canadian prime minister and any new tenant at the White House. And Harris, whose role in the administration remains to be defined but who will probably have real clout, was a natural early contact too. She and Trudeau went to high school less than five kilometres apart in Montreal’s west end. But Kerry is, on paper, merely a kind of ad hoc ambassador, and could easily have stayed on the call list of Canada’s environment or foreign-affairs ministers.

This week a senior Canadian government source spoke to Maclean’s about the developing relationship with the Biden administration. Trudeau had no intention of waiting to run into Kerry at some post-lockdown international meeting or other. “Our read is that Kerry is going to be incredibly senior,” the government source said, speaking on condition of anonymity. And the Canadians have come to view the climate file as a key to opportunities both sides can exploit — and as a source of risks that Trudeau is eager to parry.

The official PMO readout of Trudeau’s call to Kerry shows the prime minister working both angles. It says the two “identified numerous opportunities for joint leadership on climate change and a clean economy, including on attaining net-zero emissions, clean energy transmission, zero-emissions vehicles, methane emissions, and the importance of securing reliable supply chains for critical minerals and the manufacturing of batteries.” A phone call isn’t a bill or an executive order, so none of this is definitive. But many of these areas — such as supply chains and clean energy grids — will go better for Canada if the Biden administration begins to think of Canada as being inside the continental tent instead of lumping Canada in with the rest of the world.

The source mentioned Biden’s plan for a carbon border-adjustment tax — essentially a new tariff on imports from countries that don’t impose a carbon tax or other pricing mechanism. Since Canada only recently escaped Trump-era tariffs, Biden-era tariffs would not be a tremendous improvement. But Trudeau was able to ascertain that Kerry is aware of Canada’s efforts on that front.

The PMO’s account of the Kerry call also notes that Trudeau emphasized “the importance of the integrated auto, power, and supply chain markets between the two nations.” Here too, it’s a matter of ensuring that America-first measures are continental measures, with Canada and Mexico benefiting instead of paying.

The protectionist impulses that drove Donald Trump to the White House haven’t subsided. The government source noted that Biden has so far left tariffs on aluminum imports from the European Union, which Trump imposed using the national-security provisions of a 1962 US trade law, in place. The Europeans have been scrambling to get Biden to reverse course, so far in vain.

Every new U.S. presidency is a big moment in the life of a Canadian government. The stakes are just so high. When George W. Bush succeeded Bill Clinton in 2001, the government of Jean Chrétien was all-hands-on-deck, each cabinet minister reaching out to his or her U.S. counterpart. Colin Powell, the new Secretary of State, apologized to John Manley, the foreign minister, for taking a day to get back to him. It was a promising time: the Americans wanted a boom in energy production, and Bush had seconded his powerful vice-president, Dick Cheney, to work on the file. Canada had Alberta oil-sands energy to sell. Chrétien hoped it would be the start of a profitable friendship. But 9/11, and Chrétien’s decision to sit out the Iraq war, put an end to the bonne entente.

When Barack Obama was elected, Stephen Harper’s government was nervous, knowing they often wouldn’t see eye to eye. The PMO brought reporters in to brief them on the relationship, substantially an exercise in lowering expectations. They were well lowered: Harper hated the annual “Three Amigos” summits his predecessor Paul Martin had implemented with Bush, believing they encouraged the Americans to view Canada as another Mexico. Twice when it was Canada’s turn to play host to the summits, Harper found reasons not to. And then came Obama’s decision to stall approval of the Keystone XL pipeline expansion. Chilly relations turned arctic.

The Obama-Trump transition might have caused the largest recent mobilization of Canadian political muscle on the cross-border front, beginning even before Trump started arguing with observers about the size of the crowd at his inauguration. Trudeau’s two top advisors at the time, Katie Telford and Gerald Butts, joined the government minister with the best connections in Washington, Chrystia Freeland, for frequent trips to New York at the end of 2016 and the beginning of 2017, to build relationships with Trump’s son-in-law, Jared Kushner, and his weird Svengali/Boswell, Steve Bannon. It didn’t save them much grief, and in hindsight, Trudeau’s circle believe they should have viewed the easy relationship-building as a sign of looming trouble, because it turned out they were being scrutinized by curious predators more than by eager partners.

A Trump re-election would not have been the Trudeau crew’s preference, but at least it would have represented a continuation of a known set of hassles and trials. Biden’s election changes things, and not necessarily in ways that represent a straight-line extrapolation from the Obama days. Taking the measure of the new government was complicated by two big challenges: Trump’s refusal to acknowledge his successor’s election, and the COVID crisis. The Biden team had no official dealings with foreign governments before the Jan. 20 inauguration. The Canadians were left to do internal planning and to send the odd message via Biden-friendly members of Congress, who already had jobs and the institutional legitimacy that comes with them. And even since the inauguration, there has been no cross-border travel by Canadian government officials, the source said.

That makes Kirsten Hillman, a career trade negotiator who is Canada’s ambassador in Washington, even more of a key figure than she would otherwise have been, because unlike the rest of Trudeau’s circle, she’s on site in Washington.

Also working heavily on the file, from a social distance, are Telford, Trudeau’s chief of staff since 2015, before whose eyes all important Ottawa decisions must pass; Brian Clow, who handles “issues management” (general trouble-shooting), parliamentary affairs, and the Canada-US file in the PMO; and David Morrison, a career foreign-service officer who is Trudeau’s foreign and defence policy advisor. In cabinet, François-Philippe Champagne played a lead role as foreign minister until Marc Garneau replaced him in the portfolio. So have Jonathan Wilkinson, Trudeau’s low-key but effective environment minister; and Freeland, who spoke to Treasury Secretary Janet Yellen soon after her Jan. 25 Senate confirmation, and has stayed in contact with Brian Deese, the former executive from the titanic BlackRock investment firm who heads Biden’s National Economic Council.

Next steps will determine how close or cool the Trudeau-Biden working relationship proves to be. The two leaders hope to meet, or at least “meet,” before the end of February; the Canadians simply don’t know yet whether that will be in person or via screens. Biden wants an environmental summit on Earth Day, April 22, and has said he will attend the summer G7 in the United Kingdom. There is also vague talk of a Summit for Democracy at some point. On each of these, the Canadians are taking their cues from the Americans. Dances with even friendly elephants require close attention to where one puts one’s toes.