Paul Wells: The natural resources minister says 'all options are on the table,' but what exactly is the Liberal government going to do? 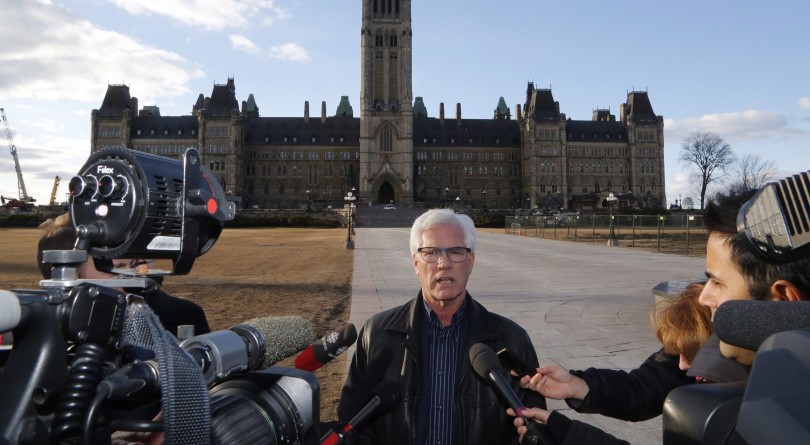 Jim Carr stood next to the Centennial Flame in front of Parliament’s Peace Tower and addressed a chilled knot of reporters and news cameras. An hour earlier Kinder Morgan had announced it was halting all non-essential spending on its Trans Mountain pipeline expansion project. If the company can’t find a way to proceed with the project, it will abandon it at the end of May.

Crunch time. Carr is the natural resources minister, generally reckoned as a heavyweight in the Trudeau cabinet. This project is basically the sum and totality of his political credibility packed into one long, narrow and increasingly hypothetical tube. And now it hung by a thread. The tube, I mean. Or his credibility. Or my metaphor. Anyway, he seemed to be taking it well.

“Thank you for coming to chat about pipelines,” Carr said, just as cool as you please. “We seem to spend a fair bit of time on that subject.”

The ennui. It burns. Carr summarized the state of play, more or less as I just did, and then read from prepared notes in French: “We expect the government of British Columbia to cease immediately all attempts to delay this project.” He did not repeat that sentence in English.

Instead he delivered a kind of analysis. “What we’re witnessing is the consequence of uncertainty. And in this case it’s uncertainty that’s generated by the government of British Columbia by threatening court action. Even if it doesn’t frame a question. Even if it doesn’t choose a court in front of which a question would be reviewed. And there are consequences in the threat of delay. Investor confidence is very important. It’s not only important for all of Canada, it’s also important for the province of British Columbia. And for a province that is as rich and has the abundance of natural resources that British Columbia has, the people of B.C. should know that this kind of uncertainty has consequences.”

This long succession of sentences could perhaps best be summarized as “C’mon, guys.”

Sign up now for the new Maclean’s politics newsletter—delivered to your inbox every morning!

Here and there, on the outskirts of the minister’s amiable outdoor chat with the scribes, there were hints that the Trudeau government takes the increasingly likely end of Trans Mountain more seriously. Carr’s staff had distributed a written statement that contained the sentences, “We will act in Canada’s national interest to see that this project is built,” and, “As our Prime Minister has said, this pipeline will be built.”

The problem with that choice of reflexive verb is that the pipeline won’t be built if it’s not built by Kinder Morgan. And Kinder Morgan had just put out a news release saying it probably won’t be built. And it had reached that decision two days after Justin Trudeau returned from a tour of Alberta and British Columbia whose main purpose was to emphasize the importance of this pipeline being built. And that trip doesn’t appear to have helped. Not because Trudeau is, in any way, innately or uniquely ineffectual, but simply because the interests at stake are large, conflicting and entrenched and can’t be reconciled with a simple tut-tut. If indeed they can ever be reconciled by anyone or any mechanism.

And all of that was why Jim Carr was standing here interposed between the cameras and the Peace Tower. Plainly what was needed was… more. Carr hinted that more is in the pipeline, so to speak, but he offered no hint of what it might entail.

“All options are on the table for the government of Canada,” he said in response to the first question from a reporter, which was, and here I’m paraphrasing, “What the hell, minister?”

“You know what our policy ambitions are,” he added. “It’s to get the pipeline built. And you know why.”

We also knew the current disposition of the comprehensible universe was not well aligned with the eventual satisfaction of the minister’s policy ambitions, so we were asking what he planned to do about it.

“Options are on the table,” he said. “We’re considering all options.”

Such as? (In the confusion of simultaneous questions, one reporter shouted, “The military?”)

“All options are on the table.”

The CBC reporter asked whether he was thinking of court. I made myself the proxy for Jason Kenney’s suggestion that the feds invoke the division of powers in the BNA Act to declare that the pipeline is entirely in federal jurisdiction, even though I don’t believe anyone actually contests that. Anyway, neither the CBC reporter nor I could goad Carr toward greater specificity. “We’re not ruling anything out.”

Why doesn’t he pound his fist on the table, another reporter asked, and say enough is enough?

“I think I just said that,” Carr said. Well, sure he had, sort of. But there are ways and ways to say things.

This precinct is full of historical parallels, whether you want them or not. About 80 feet from where Carr was standing, on an October morning in 1970, Pierre Elliott Trudeau had run into another CBC reporter, Tim Raife, who wanted to know what he would do about the kidnapping of Quebec’s transport minister and the British trade commissioner. “Just watch me,” the prime minister said, and three days later he invoked the War Measures Act, which we all still argue about sometimes.

But Pierre Trudeau’s “Just watch me” established a precedent, not just for artful vagueness, but for follow-through. It’s a precedent honoured most often in the breach: generations of politicians have used “Just watch me” or its assorted variants, including “All options are on the table,” when what they really meant was “I have no clue” or “I’m crossing my fingers” or “Baby needs a new pair of shoes.”

So the temptation among other actors in a political drama, when a central figure pulls the just-watch-me, is to wait them out and not do their work for them by folding their cards prematurely. And sure enough, the rest of Sunday night played out according to a series of familiar scripts. Jason Kenney was apocalyptic. Rachel Notley was firm, including in her insistence that what she had seen so far from Ottawa wasn’t nearly satisfactory. And John Horgan, B.C.’s premier, was unapologetic. As some of my friends like to say, if nothing changes, nothing changes.

WATCH: Follow the route of the Kinder Morgan pipeline

Two months ago, when Carr and his colleague Catherine McKenna announced a hilariously cumbersome process to speed up the approval of major resource projects, I noted that investors are increasingly wondering why they should put a thin dime in Canada if this country remains, in the nicest way possible, incapable of getting its national act together on anything. The question remains. (If Carr, Kenney, Notley and Horgan get to quote themselves, by God, I get to do it too.)

Opposition to Trans Mountain isn’t something John Horgan invented or whipped up, after all. It’s more like an ingrained instinct in large parts of British Columbia and the environmentalist centre-left. And it’s self-perpetuating, which is why two MPs have been arrested so far in pipeline protests.

When Trudeau said, just the other day, that “we’re all getting what we want” on pipelines, he was expressing more of a hope than an observation. And it wasn’t a new hope. It was a reiteration of the selling proposition, not only of his government, but of Notley’s: that there is no essential contradiction between resource wealth and environmental virtue. That by being greener, Canada can get richer. But no law of politics requires that proposition to find a sufficient number of takers. You can’t always get what you want, and pace the Stones, sometimes you don’t even get what you need.

Trudeau and Notley promised pipelines for carbon taxes. If half of that bargain collapses, what happens to the other half?