Trudeau and the premiers, moving forward together

Paul Wells: In Montreal, a glimpse of Trudeau federalism—everyone gets to 'agree to disagree' and it's enough to hold 'real substantive discussions.' Easy. 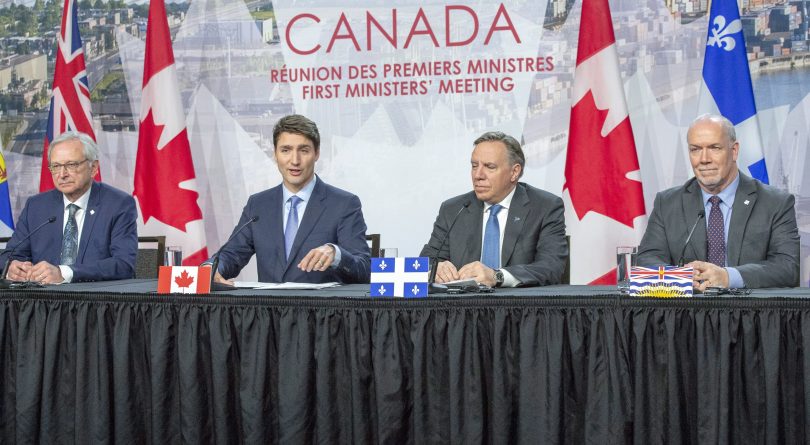 Canadian premiers and the Prime Minister speak to the media at the First Ministers closing news conference Friday, Dec. 7, 2018 in Montreal. (THE CANADIAN PRESS/Ryan Remiorz)

It’s the style of these things that fascinates me. There is no provision in any of Canada’s constitutional documents for first ministers’ meetings (though there is plenty of language about how many governments need to agree for this or that sort of constitutional amendment). Frequency, agenda, goals, tone and other considerations are left entirely up to each generation of prime minister and premiers. As a result, the improvised but crucial institution academics call “executive federalism” changes radically over time. This is handy. Stasis is trouble.

Stephen Harper famously preferred not to meet his provincial counterparts as a group at all. Officials in the federal public service had reported to him that the big federal-provincial meetings hosted by his predecessor, Paul Martin, more closely resembled muggings than any serene exchange of views. Harper preferred to count heads before walking into a bar fight and decided, with rare and tightly focused exceptions, to meet them one at a time instead when possible.

Pierre Trudeau and Brian Mulroney liked—well, liked is a strong word. They couldn’t resist convening the premiers to ratchet up the stakes on constitutional, indeed nearly existential, questions of shared sovereignty and national identity. Trudeau won big once, with the 1982 constitutional repatriation and the Charter of Rights, though the hangover in Quebec was brutal. Usually everyone lost, at terrible cost in treasure, energy and human potential.

Between the Pierre Trudeau/ Mulroney model—roll the dice—and the Harper model—write if you get work—Jean Chrétien found a middle ground. Specifically constitutional change was ruled out as a topic, but big administrative changes were absolutely up for discussion. Chrétien met his counterparts seven times in a decade. Officials and ministers would play telephone tag until everyone was close to an agreement, and then Chrétien would call them to Ottawa for a day or two of cajoling, threats and horse trading. Usually it worked and produced modest, measurable progress.

READ MORE: Rachel Notley on an economy that’s ‘being held hostage’, dealing with Trudeau and the next election

Now here’s the thing. With all of these prime ministers, the goal was unanimous agreement on specific wording to address specific, defined problems. It’s part of why the stakes were always so high. Time was short. Deadlines were as firm as the flight plans of premiers whose voters would punish them if they spent too much time in Ottawa talking about sometimes-esoteric issues. Wins or losses were as obvious as the words in a communiqué. A few words could make all the difference. There were wars over commas.

Justin Trudeau innovates yet again. He does not gather the premiers to  decide anything. Everyone’s just checking in. Several days before Friday’s meeting in Montreal, Trudeau’s office sent premiers a proposed agenda. It made no room for a series of issues of capital importance to several provinces, especially the gap between oil prices in Alberta and those in global markets. Several premiers complained. Some wondered aloud whether a trip to Montreal was even worth their time. Did Trudeau’s office tell them to stuff it? Not at all. The feds gave a lot of ground, and in the end no premier reported that his or her favourite issues was ignored. Because when discussion is the only goal, discussion is easy.

Lately I have been re-reading, with new fascination, a few sentences in the report Mary Dawson, who was then the federal ethics commissioner, released a year ago regarding the Trudeau family’s flight to the Aga Khan’s tropical island. Dawson decided the trip was a bad idea. But along the way she had to gather a sense of what any meeting with Justin Trudeau is for. The way she described what she learned is fascinating. “The meetings he attends as PM are not business meetings,” she wrote. “Rather, they are high-level meetings centred on relationship building and ensuring that all parties are moving forward together. Specific issues or details are worked out before, subsequently or independently of any meeting he attends.”

Dawson was a career civil servant, and she chooses her words with care. Note that she wrote generally about any meeting with Trudeau, not merely meetings in the tropics with billionaire oligarch/ spiritual leaders. Specific issues are worked out independently of any meeting he attends. The meetings are for relationship-building and moving forward together.

Precisely so. Trudeau greeted reporters after Friday’s meeting with the glad news that there had been “real substantive discussions” and that all concerned were “moving forward” in a “thoughtful, constructive way.”

Did it matter that Doug Ford, Ontario’s premier, had accused Trudeau of “moving the goal posts” by demanding that Ontario reduce its carbon emissions by more than 30 per cent from 2005 levels? Not overly. I mean, Trudeau accused Ford of moving goal posts. Catherine McKenna, the federal environment minister, said “Let’s be clear” a lot.

Neither Trudeau nor McKenna seemed sufficiently briefed on the details to note that Ford’s environment minister, Rod Phillips, was bragging only last week about adopting a less ambitious target than the one sought by Ontario’s previous Liberal government. “It is absolutely true that Kathleen Wynne’s targets were greater than our targets,” Phillips said then. The difference is immense: 37 per cent reduction from 1995 levels under the old government, 30 per cent cut from 2005 levels under the new. Compare those targets against current emissions, and it’s the difference between an 18-megatonne reduction under Ford and a 48-megatonne reduction under Wynne.

If Trudeau and Ford had hoped to sign a document with one of those amounts, there would have been casualties. But it would also have been absolutely bloody impossible for the Prime Minister of Canada to escape the building without knowing, with exquisite precision, the difference between what he sought and what was on offer. In fact none of the federal or provincial delegations would have entered the building without knowing the size of the gap separating each of them on big questions.

Trudeau federalism—moving-forward federalism—is easier. Everyone gets to “agree to disagree” because it’s enough to hold “real substantive discussions” that let everyone “move forward.”

It’s like meeting the contractors on a home construction project and discovering that one is measuring the plywood boards in inches, another in centimetres, a third in quintals, and that yet another has shoplifted three live hamsters from the nearest pet shop while somebody else is amusing himself by stuffing as many golf balls as possible into his mouth. “Great discussion, everyone,” you say. “We’ll have to agree to disagree. Let’s move forward.” Meanwhile it’s snowing on an empty lot and you are certain to die before anything resembling a house appears.

But this is what is possible—it’s all that’s possible—with a prime minister who sees meetings as a chance to build relationships while specific details are worked out independently. What’s missing in Justin Trudeau’s version of executive federalism is an executive in the federal chair.