Trudeau looks to shore up the Caribbean vote

Politics Insider for May 21: Trudeau gets on the phone with the Barbados PM, CSIS alludes to outdated laws stymying investigations and Jim Watson loves the Wu-Tang Clan 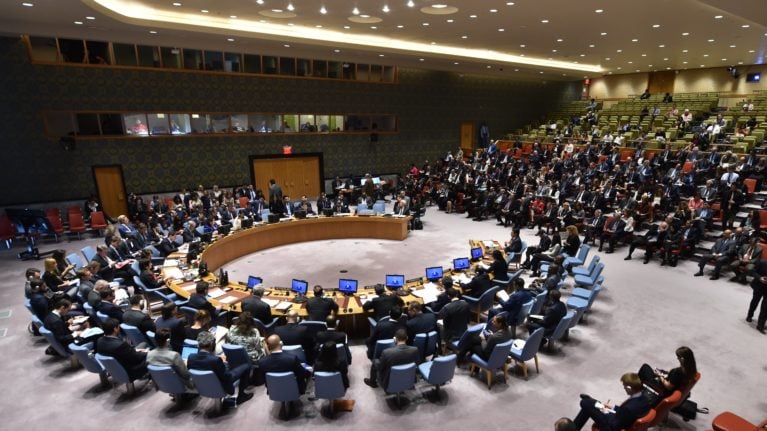 The UN Security Council gathers during a meeting on May 15, 2018, at UN Headquarters in New York. (Hector Retamal/AFP via Getty Images)

Justin Trudeau‘s round-the-world readout tour keeps chugging. Yesterday he spoke with Mia Mottley, the prime minister of Barbados and chair of the Caribbean Community. Most of the five-paragraph statement mentioned efforts to fight the global pandemic. Canada’s pursuit of a seat on the UN Security Council merited no mention at all.

In fact, few of the handy summaries of prime ministerial phone calls of late—including chats with Israeli alternate PM Benny Gantz and Ugandan President Yoweri Museveni—makes any mention of the coveted spot on the global decision-making body. This week’s exception to that rule came on Tuesday, when a notably beefed-up summary of a call with Eastern European UN reps mentioned the Security Council election and noted the four million Canadians with ancestral ties to that region.

The PM was slated to attend a virtual meeting of the United Nations Latin American and Caribbean Group—one suspects a certain item was on the agenda—but the PMO tells Maclean’s that event was postponed. (This afternoon, Trudeau does plan to virtually attend a United Nations Asia-Pacific Group meeting.)

Where has the UN been during the coronavirus pandemic? Speaking of the New York-based international body built to solve problems across borders, Sergio Marchi is wondering why the UN isn’t playing a major role in fighting the pandemic. Marchi, a former MP who was once the Canadian ambassador to the World Trade Organization and UN Agencies in Geneva, writes in Maclean’s that the UN’s low-key approach is mystifying.

As one who believes deeply in multilateral institutions and who served these institutions in Geneva, I find this perplexing and frustrating. It’s not exactly the best way for the UN to celebrate its 75th anniversary this year. The UN was built to purposely help and rally nations in confronting global challenges, yet it has been largely missing in action. Granted, the WHO has been active, but they have also received much criticism for their actions.

A new public report from the Canadian Security Intelligence Service warns that Federal Court rulings can create “tensions between technology in the context of modern investigations, and a statute drafted over thirty-five years ago”—in other words, Canada’s spy agency says the law that governs its work is outdated. The Toronto Star noticed CSIS’s inclusion of so-called “incel”-inspired attacks as a form of ideologically motivated violent extremism.

Jim Karahalios is back in: Well, for now. An Ontario Superior Court judge had good news for Karahalios, a prospective candidate for the Conservative leadership rejected in March by a subcommittee of the party’s leadership organizers. Justice Paul Perell ruled the dispute resolution appeal committee didn’t have the authority to boot Karahalios from the race. The full organizing committee, which does have that power, still could.

Seven hours of hell: Stephen Maher’s latest reporting on the Nova Scotia shooting tells the story of Heather O’Brien, a 51-year-old nurse who fell victim to the gunman. The RCMP waited seven hours before finally confirming her death to O’Brien’s family, who’d sought answers all day.

The family gathered at the home of Dobson’s 61-year-old father, a retired contractor, and went separately to the scene in groups of two, asking what had become of Heather O’Brien. Repeatedly the officers on the scene, standing there holding long guns, sent them away without telling them their mother hadn’t made it. Individual officers spoke to them kindly, but they couldn’t get an answer. The family wasn’t finally informed until about 5 pm, when they went down, all eight of them, and demanded to be told in an emotional confrontation.

Yesterday, the PM formalized the application process for federal-provincial rent relief, a program that has left many tenants frustrated and many landlords unwilling to participate. Read the PM’s full remarks from outside his home.

The man in the ironed mask: Yesterday will go down as The Day The Mask Advice Changed. Theresa Tam, Canada’s chief public health officer, signalled her official advice will shift from “suggesting” we all wear masks in certain circumstances to “recommending” we do so. Significant shift? Minor jargon switch-up? Either way, the PM decided to don a black mask for his trip to Parliament Hill. Of course, reporters staked out the entrance to West Block to catch the moment on camera.

Awkward collab: The mayor of Ottawa, Jim Watson, proudly wore a Wu-Tang shirt after the legendary hip-hop group donated to the Ottawa Food Bank and then launched some merch to raise awareness. This might top the list of pandemic photo-ops no one expected.