Paul Wells: The election-year budget is sprinkled with what money TruMorn could scrap together. And buried deep inside is a big headache for journalists. 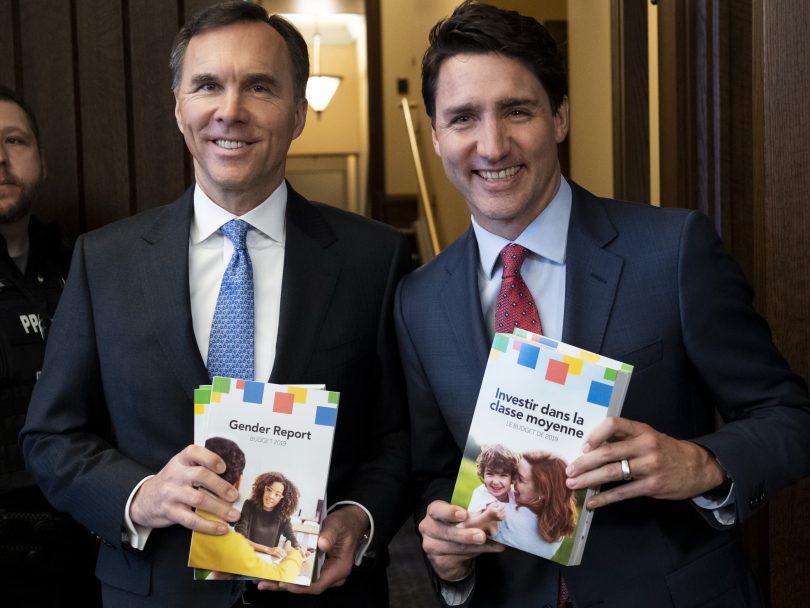 Trudeau and Morneau arrive in the Foyer of the House of Commons to table the federal budget on Parliament Hill in Ottawa on Tuesday, March 19, 2019. (Justin Tang/CP)

Here and there you still find glimpses of an activist and imaginative government. I’ll get to the big numbers, but I was struck, and encouraged, by a smaller one. On page 156 of Bill Morneau’s 460-page 2019 federal budget there’s $30.5 million over five years for expanded access to safe prescription opioids, “protecting people with problematic opioid use from the risks of overdose and death.”

This is legalization of hard drugs by another name, since many of the people who need a safe opioid supply to survive the greatest public-health crisis of our time will now have an easier time getting that supply. Prohibition remains in place, but Justin Trudeau’s Liberals government is building life-saving bypasses around the general policy.

It’s possible to imagine a government that would advertise that change as part of a society-wide shift in attitudes towards addiction and harm reduction, but the policy is more important than the communications strategy, and at least the policy is here.

Like so many such gestures in Budget 2019, it’s also strikingly modest in scope, starting with $1 million in 2019-2020 and ramping up. This is not a lot compared to the $150 million emergency opioid fund of Budget 2018, or the $350 million in total new investment on the file since this plague started slaughtering drug users in 2017.

Note that the opioid money I led with is $30.5 million over 5 years. Or $6-ish million a year. That’s a heartening announcement now, but it’ll be progressively reduced margin of manoeuvre for next year’s finance minister, whoever that will be. Trudeau/Morneau’s enthusiastic embrace of multi-year spending ramp-ups is now, four budgets in, seriously cramping Morneau/Trudeau’s style.

And it continues: $37.4 million over five years for expanded parental leave for PhD and postdoctoral researchers. A $327.5 million support program over 5 years for First Nations postsecondary students. A comparable program for Inuit students at $125.5 million over 10 years. (Why is the Inuit program twice as long as the First Nations program? It’s a mystery.) $315 over five years to “make the Canada Service Corps Canada’s signature national youth service program.” It’s traditional in French-language news outlets to call such wide-angle disbursement of moderate sums “saupoudrage,” or sprinkling. This is a very sprinkly budget.

Some of its provisions are more ambitious. There’s a billion (over only two years) to improve access to exorbitantly expensive drugs for specified rare diseases. (How do TruMorn afford that? By spending the money later: it will begin flowing only in 2022-23.) There’s $224 million right out of the gate, rising to $392 million in five years, to make Canada Student Loans more generous. There’s $2.2 billion, refreshingly free of attached strings, in “much needed infrastructure funds” right now, this year.

Why infrastructure funds would still be “much needed,” four years into the tenure of the third prime minister in a row to make infrastructure spending a personal priority, is an interesting question for another day.

But overall, the impression is of a government that is deeply preoccupied with election-year concerns but can’t shake loose much money to pay for election-year goodies. As a result, MorTru are forced to come up with novel funding for some of their promises. Universal high-speed internet access will be paid, in part, by “new investments by the Canada Infrastructure Bank.”

You remember the Canada Infrastructure Bank. It was the arms-length agency that was designed to attract countless hundreds of billions from Norwegian and Emirati pension funds to pay for game-changing new public infrastructure. Monorails. Spaceports. Now we learn that the Bank is “examining opportunities… to seek to invest $1 billion over the next 10 years and leverage at least $2 billion in additional private sector investment” to pay for this broadband.

How the government knows this, when the Bank has made no public announcement, and how we are to keep calling the bank arms-length when TruMor are clearly manipulating it with their teeny T Rex arms, is another interesting pair of questions for another interesting day.

Perhaps I can be forgiven for being particularly interested in the questions that arose as I read the section on Supporting Canadian Journalism. This is four paragraphs on Page 173 and four more illuminating pages at the very back of the book. In the jargon of my craft, MorTru are burying the lede.

“A strong and independent news media is crucial to a well-functioning democracy,” they write, so they’re giving the news media hundreds of millions of dollars. Never let it be said that irony is dead. The Prime Minister and his finance minister promise “an independent panel of experts” to “recommend… eligibility criteria.” But the eligibility criteria are already laid out in detail in pages 373-376. I’m left wondering what the independent panel is for.

In order to get its share of the federal money, a news organization will need “Qualified Canadian Journalism Organization” status. It’ll need to be incorporated in Canada, operate in Canada, resident in Canada, its chairperson and at least 75 per cent of its directors will have to be Canadian.

It “must not be primarily focused on a particular topic such as industry-specific news, sports, recreation, arts, lifestyle or entertainment.” You’ll be pleased to know your government wants to subsidize nothing but political news. Because that’s not problematic.

To “ensure that registered journalism organizations are not used to promote the views or objectives of any particular person or related group of persons,” a registered organization “must not be factually controlled by a person (or group of persons).” One suspects this line is designed to keep the kitty out of the hands of anyone named Ezra. Its effect on organizations run by people named Jesse, or founded by people named Joe Atkinson, remains a subject for another day.

Somebody has already decided eligible newsroom labour costs will be capped at $55,000 per year; that the tax credits will be available from next January, i.e. for donations this year; that magazines receiving money from the Canada Periodical Fund, such as the one you’re holding in your digital hands, will not qualify for the labour tax credit; that “carrying on a broadcasting undertaking”—Periscope? Twitter Live?—will also be disqualifying; and, again, that the wage subsidy kicks in this year.

My understanding is that the Conservative opposition intends to spend not a dime of the money the Liberals have put aside for this massive subsidy to Canadian political journalism. Which means that some large percentage of the reporters covering this autumn’s federal election campaign will be in a direct conflict of interest. Maybe this won’t affect anyone’s coverage! Maybe it will backfire, and cranky reporters will go extra-hard on the hand that has already budgeted their feeding! But objectively, one of the issues in the next election will be the taxes on the salaries of reporters who are already working this year. I’m sure this won’t be a problem at all. And you believe me, right?