Trudeau, the ambassadors or the bureaucrat—somebody has their story wrong

Politics Insider for July 30: World government's have a fixer-upper problem, on Trump trade tantrum watch and Oct. 21 it is then 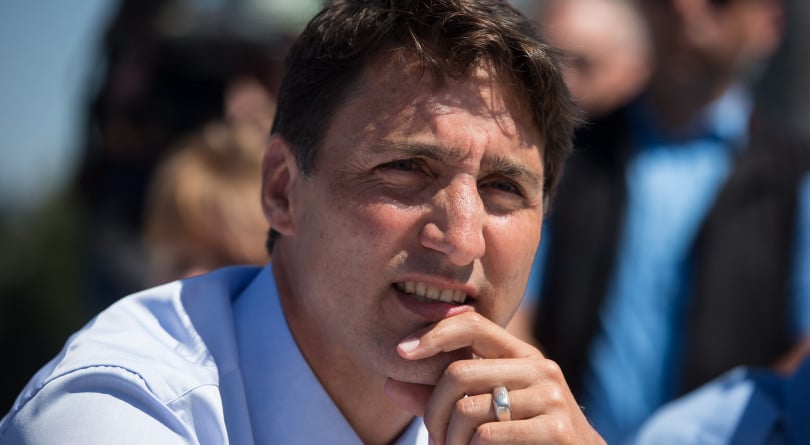 Prime Minister Justin Trudeau listens while talking with members of the Canadian Coast Guard after an announcement at the Kitsilano Coast Guard Base, in Vancouver, on Monday July 29, 2019. (Darryl Dyck/CP)

In a fixer-upper fix: Justin Trudeau and Boris Johnson don’t have much in common, but they do share one similarity — both face decisions that they aren’t going to make about renovating their official prime ministerial residences. But as Paul Wells notes, crumbling first houses are a problem facing many countries around the world:

An official residence is a piece of government equipment. It experiences wear and tear. It needs maintenance. But if you describe the things that need maintenance—the billiard lounge, the vast ornamental fireplace, and so on—it triggers many voters’ certainty that we are being milked so the swells can live like kings. So they delay. So the decay gets worse. And so on.

This helps explain why, as I checked one country after another, I found so many cases of official residences turning into quagmires. There are the cost increases and delays in repairs to the South African presidential residences. There’s the tripling of refurbishing costs of the prime minister’s residence in New Zealand. The valse-hésitation around 24 Sussex would seem to be a popular dance the world over.

This is interesting. In Canada, looking at only the Canadian case, readers are tempted to personalize the decay. It’s Justin Trudeau’s fault! The guy can’t make a decision! No, it’s Stephen Harper’s fault! He was so obsessed with living in 24 Sussex he forgot to make it livable! But it’s harder to sustain that argument unless you can explain why Justin Trudeau also botched the job in Canberra or Wellington. Maybe this is just the way of the world. (Maclean’s)

It’s a date: No need to tear up your calendars — election day is staying put on Oct. 21. That date also happens to be the Orthodox Jewish holiday of Shemini Atzeret and Conservative candidate Chani Aryeh-Bain had called on Elections Canada to shift voting day, taking her case to the Federal Court, which ordered Chief Electoral Officer Stephane Perrault to reconsider. “This is a difficult situation that directly touches upon the very core values of our democracy,” Perrault wrote in his decision. “I nevertheless believe, when considering the entirety of my statutory mandate, and especially at this time in the electoral calendar, that it is not in the public interest for me to recommend a change to the date of the general election.” (Canadian Press)

Gone fishin’: The U.S. House of Representatives wrapped up for its summer break without tabling a bill to ratify the USMCA trade deal, meaning NAFTA’s fate will likely remain an open question throughout the federal election. The ultimately worry: that President Donald Trump will throw a tantrum at some point over the summer and invoke the six-month notice period for withdrawing from the existing deal. On the one hand, experts say that is highly unlikely. On the other hand, Trump. (Canadian Press)

From Politico, here’s a closer look at how Trump’s summer of trade disruption could unfold. As for Canada, Trudeau says his government will take a you-first approach to ratification, waiting to see what the U.S. does after summer: “We look forward to ratification of the new NAFTA but we will do that in line with the American process when it picks up again this fall.” (Twitter video of Trudeau)

Blunder pressure: The House foreign affairs committee will vote today on whether to open an investigation into allegations that the Prime Minister’s Office leaned on two former ambassadors to China to clear their public comments with the government. With the Liberals holding the majority of the seats on the committee, a probe isn’t likely to go anywhere. But a fresh denial from Trudeau will provide fodder for opposition members on the committee —  speaking in Vancouver the Prime Minister said no one from his office directed an official from Global Affairs Canada to rein in David Mulroney and Guy Saint-Jacques, even though they both said the senior bureaucrat said he was taking action on orders from the PMO. (CBC News)

You’re welcome: The chief of the Grassy Narrows First Nation in Northern Ontario, which has been forced to deal with mercury contamination in its water systems, is stepping into the federal election campaign as a candidate for the NDP. Chief Rudy Turtle opted for the NDP route because, he said, the Trudeau Liberals had “failed to deliver on their promises” to address outstanding issues like Grassy Narrows drinking water problems. Trudeau’s thuddish quip to a group of Grassy Narrow protestors at a Liberal fundraising event in March — “Thank you for your donation,” he was videotaped telling them — sure didn’t help either. (CBC News)