Politics Insider for Oct. 30: PM Trudeau meets with EU leaders, there's a chance a mall near you used facial recognition without your consent and the Quebec referendum was 25 years ago today 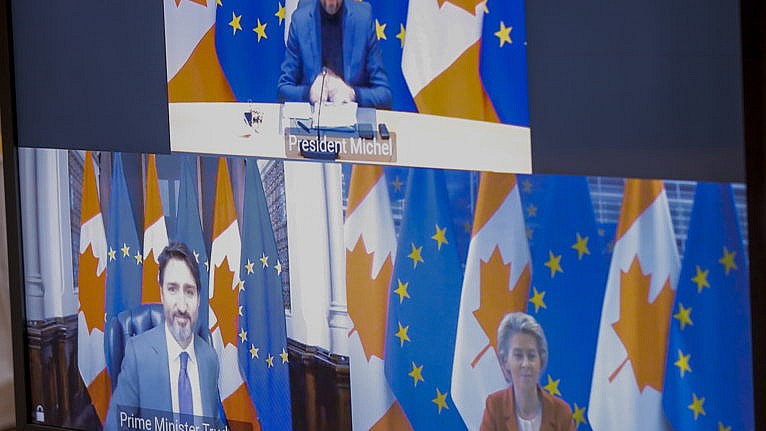 Every time he’s in front of a mic, Prime Minister Justin Trudeau is asked what he’ll do in case of post-election political instability south of the border. Yesterday, Trudeau met virtually with European Council president Charles Michel and European Commission president Ursula von der Leyen. A couple of headlines that referenced the leaders’ support for “world order” had conspiracy theorists running wild with theories of global domination by powerful elites. But really, the confab was much ado about nothing—a multilateral buffet of cooperation on the pandemic, economic recovery, climate change, free trade, artificial intelligence, foreign policy and even the Arctic.

Trudeau carefully reiterated that American elections are for Americans to sort out. “We will follow along carefully without interfering or intervening in well-established processes internal to the United States’s democracy.” The Canada-EU show of solidarity made few headlines outside of Canada, meriting only a small mention, for example, on a BBC daily liveblog focused on the U.S. election.

Canada’s privacy commissioner has determined that Cadillac Fairview, the owner of many shopping malls across the country, “collected and used personal information, including sensitive biometric information … without valid consent.” Daniel Therrien’s blistering report, co-authored with his provincial counterparts in Alberta and British Columbia, ruled that “anonymous video analytics” installed in electronic directories in 12 malls. The company used facial recognition software to take photographs and form demographic profiles of shoppers. Cadillac Fairview “expressly disagreed” with the findings and claimed to have stopped using the tech in 2018—but “refused to commit” to seeking express opt-in consent if the software were reintroduced.

Crime is up, but still down: Statistics Canada’s crime severity index rose 5 per cent between 2018 and 2019, but last year’s number is 9 per cent lower than 2009. Violent and non-violent crime both increased for the fifth straight yea. Police reported 2.2 million incidents, including 678 homicides. They also reported 174 Indigenous victims of homicide, a rate “approximately six and a half times higher than the rate for non-Indigenous homicide victims.” Cannabis-related crime has dropped every year since 2012, and saw “precipitous declines” in 2018 and 2019.

The Parliamentary Budget Office says a Senate bill that would grant judges discretion in applying mandatory minimum sentences for convicted murderers would eventually save the feds about $8.3 million a year. Sen. Kim Pate‘s proposed law—intended to combat the over-incarceration of Indigenous people—would apply to all offenders, but the PBO report focused only on murder.

Pate’s colleague, Conservative Sen. Don Plett, has taken sides in next week’s U.S. presidential election. Plett, a Manitoba senator who was once his party’s president, referred to Donald Trump as his “good friend.” CBC News reports that Plett, speaking in the Senate, looked forward to sending congratulating Trump and the Republicans if Americans vote for the “right side.”

Canada’s next space toys: You might have heard of Canadarm 3, the multi-jointed grandchild of Canada’s first robotic outer-space appendage. The third version will eventually be affixed to a lunar space station. Yesterday, the Canadian Space Agency announced another pair of lunar innovations: a 360-degree camera that will capture detailed images of the moon’s surface and new GPS technology that will guide the next lunar lander to the surface.

Fisheries and Oceans Canada is also looking for some fancy tech for research in the High Arctic. The department is searching for drones that can capture high-quality images of marine mammals—and even identify “individual animals through unique scars and markings.”

Anniversary of the day: Twenty-five years ago today, Quebecers nearly voted to leave Canada. A stunning 93 per cent of eligible voters cast a ballot for either “Oui” or “Non,” and the nays won the day with a margin of a little over 1 per cent. “So near and so far for sovereigntists, and so uncertain and unsatisfying a result for both sides,” wrote Anthony Wilson-Smith in Maclean’s.