The prime minister made speeding the path to self-government a personal priority, but the initiative has met with skepticism and resistance 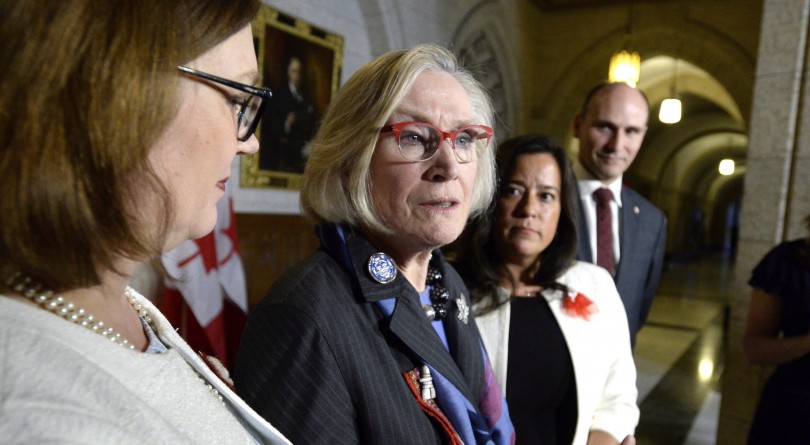 Minister of Crown-Indigenous Relations Carolyn Bennett, speaks about the framework for the recognition and implementation of Indigenous rights, as Minister of Indigenous Services Jane Philpott (left), Minister of Justice Jody Wilson-Raybould, and Minister of Families, Children and Social Development Jean-Yves Duclos look on, in the House of Commons on Feb. 14, 2018. (THE CANADIAN PRESS/Justin Tang)

Justin Trudeau doesn’t often deliver a full-blown speech in the House of Commons. In fact, he’s done it only once so far this year. On Feb. 14, the Prime Minister stood for about 15 minutes to pitch his plan for what he called a Recognition and Implementation of Indigenous Rights Framework.

That’s not the sort of thing many Canadians notice, but his rare decision to so clearly invest prime-ministerial prestige at the launch of a policy push showed the weight Trudeau puts on reconciling with Indigenous people.

The framework would, in theory, clarify and speed up what has been a long, frustrating path for any First Nation that tries to negotiate its way out from under the reviled Indian Act and become self-governing. Self-governing communities take on decision-making power over everything from education to economic development. Setting out a framework to make achieving that autonomy less onerous looked promising.

Trudeau proposed a brisk timetable for getting it done—consultations starting last spring, legislation to be tabled before the end of this year, in time for that bill to be passed into law well before next fall’s election.

But making the framework a reality at that pace now looks at best problematic, at worst a prescription for a rupture in the Liberals’ relationship with First Nations. Asked if there’s any chance that the Assembly of First Nations will support a framework bill tabled in what’s left of 2018, AFN national chief Perry Bellegarde said, “Our chiefs have said stop the current process—do a total reset with First Nations leading the way.”

The AFN is the national lobby group representing the chiefs of more than 600 bands now run under Indian Act rules. But it’s not just the chiefs who don’t like the way the government is pursuing the framework idea. Mary Ellen Turpel-Lafond, a prominent Indigenous law professor at University of British Columbia, says the government was worryingly vague from the outset of the consultations.

Turpel-Lafond said the starting point should have been a clear, agreed understanding of exactly what Indigenous rights have already been established in court rulings and elsewhere. “They chose to not put out any material and have this open-ended engagement,” she said.

The result? Confusion, suspicion, and, in Turpel-Lafond’s view, a process that soon “unravelled.” Questions swirled around exactly what powers a First Nation would have to negotiate and which are assumed. For example, she said federal discussion documents suggested that provincial approval might be needed for a First Nation to run its own child welfare services. That’s a big point of contention, given the controversy in some provinces around Indigenous kids ending up in non-Indigenous foster homes.

Under many treaties, Turpel-Lafond said, “chiefs and headmen reserved authority to keep peace and good relations amongst their citizens,” which would include caring for children. “They didn’t ever consent to child welfare coming onto their reserve, having authority and jurisdiction, and removing their kids,” she said. Federal officials told Maclean’s they are trying to “walk a fine line” between encouraging First Nations that want to run child welfare on their own and reassuring others worried that Ottawa might simply stop supporting those services.

Crown-Indigenous Affairs Minister Carolyn Bennett is responsible for the framework initiative. In an interview, Bennett said the concept is misunderstood. She said her core aim is to make sure the government keeps its word in self-government agreements, not to dictate terms to Indigenous people. “In some ways, what we’re describing is the honour of the Crown in our relationships,” Bennett said. “But we’re not prescribing anything about how Inuit, First Nations and Metis are to govern themselves.”

Another key question in the framework consultations is how Indigenous people would organize themselves into entities seeking full or partial self-government. A single band might want to break away from the Indian Act. More often, though, nations made up of several bands, perhaps linked by historic treaties, are likely to come together. Bellegarde said sorting out exactly how this will happen is a complex, sensitive set of issues. “Province by province, territory by territory, nation by nation—all will have to be looked at,” he said. “This can’t be rushed.”

But Bennett said she has to consider, not only First Nations that will aim for self-government in the future, but also those that have already signed deals, along with Inuit land-claims organizations and some Métis. These groups tend to be enthusiastic about the government’s promise for new oversight under the framework to make sure Ottawa fulfills its end of agreements. She said that might be done through the Auditor-General’s office, or perhaps by an independent officer reporting to Parliament. Métis leaders, in particular “would be very disappointed if [it] were held back,” Bennett said.

So she seems to be caught in a squeeze between competing interests—groups that want her to stick to Trudeau’s original schedule and those who demand she start over at square one. And, of course, this isn’t the only politically volatile Indigenous file in play. Next spring, the troubled National Inquiry Into Missing and Murdered Indigenous Women and Girls is slated to deliver its report. Given that Bennett denied the inquiry its request for more time, there’s a strong likelihood that some Indigenous leaders will be dissatisfied with the result.

The framework and the inquiry are arguably the two highest-profile bids by the Trudeau government to set a new tone in relations with Indigenous people. But the government is also working, largely through Indigenous Services Minister Jane Philpott, toward more tangible, incremental goals. Philpott’s department points to ongoing work to improved First Nations infrastructure, including 463 water projects, about 70 schools being built, and more than 13,000 homes in reserve communities with perennial poor housing.

Even sharp critics of the framework process don’t want to sound too critical of the Liberals. In an interview, Turpel-Lafond repeatedly stressed that Bennett’s sincerity isn’t in doubt. “We have this minister making heroic efforts, tirelessly meeting with people,” she said. “But behind her [the framework consultations] didn’t have sufficient shape, form and a plan.”

And the high expectations for the framework started with the Prime Minister rising in the House last winter. That day, Trudeau closely linked the idea to those easier-to-grasp aims around, say, potable water and decent housing. “We need to both recognize and implement Indigenous rights because the truth is,” he said, “until we get this part right, we won’t have lasting success on the concrete outcomes that we know mean so much to people.”

Trudeau isn’t likely to abandon a project he’s pinned so much hope on. If his framework is to survive, though, it looks increasingly like his timeframe for achieving it can’t.