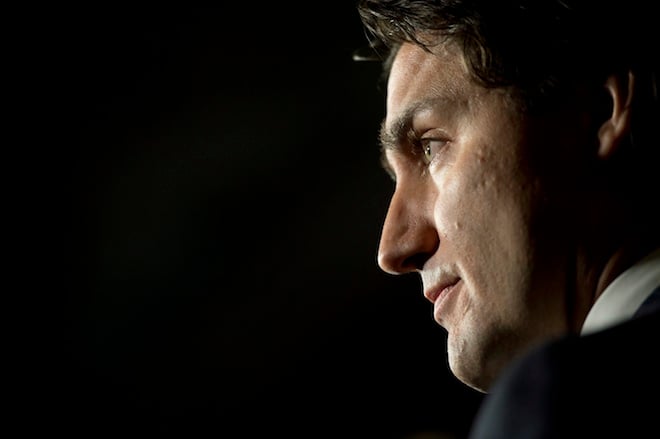 Justin Trudeau’s startling move today in kicking all Liberal senators out of his parliamentary caucus adds an unexpected new dimension to the already complex debate around reforming the discredited upper chamber.

Trudeau is positioning himself as determined to cleanse the Senate of what have always been its most fundamental traits—partisanship and patronage. The first part would be eliminated by having all senators, starting today with those 32 former Liberals, sit as independents.

The second would be accomplished if Trudeau ever became prime minister, and was able to implement what he’s formally proposing: a new process for selecting new senators that would be based on public input beyond the control of the ruling party

“This is not a decision that I’m making lightly,” he told reporters on Parliament Hill. “And I’m not doing this for any personal benefit or advantage. I’m doing this because I firmly believe this is the way we will be better able to serve the people of Canada.”

Of course, his avowal of pure motives was not accepted at face value. Reporters asked if he was motivated by the examination of senators’ expenses now being conducted by Auditor General Michael Ferguson. Trudeau denied he was acting on advance information that Ferguson’s findings on Liberal senators’ spending would prove embarrassing.

“No, I have had no Liberal senators come and tell me anything about any expenses,” he said. “The issue of expenses is one that needs to be taken care of and is being taken care of. What I am taking care of today is the partisanship and patronage.”

But Pierre Poilievre, who is Prime Minister Stephen Harper’s point man on Senate issues as minister of state for democratic reform, reacted by slamming Trudeau’s surprise announcement as “a public relations manoeuvre in order to avoid accountability, which the Auditor General will deliver.”

Still, the deeper question isn’t about what’s in the A-G’s report, but rather what’s actually politically and legally feasible when it comes to revamping the upper chamber.

Poilievre repeatedly alluded to Harper’s decision to ask the Supreme Court of Canada, in the so-called Senate reference, for guidance on reform. He repeatedly touted the Conservatives’ hope that the court allows them to go ahead with their plan for provinces to hold consultative elections that would choose the senators future prime ministers would appoint. Making the Senate an elected body is the very heart of the Harper approach.

Yet constitutional experts interviewed by Maclean’s after the Supreme Court held its hearings on the reference late last year tended to doubt the Harper government would get the answer it wants from the court on its model for electing senators. “My hunch, based on the hearings,” said McGill law professor Robert Leckey, “is the government is not going to get the non-binding elections.”

David Smith, distinguished visiting scholar in politics and public administration at Ryerson University in Toronto, was harsher in his characterization of the federal government’s push to introduce such fundamental reforms without seeking provincial approval for a constitutional amendment: “There is just such a lack of constitutional sensitivity in this that it is almost mind-boggling.”

Trudeau repeatedly said that the Tory bid to elect senators would require opening up the Constitution and embarking on a decade of negotiations with the provinces, something he refuses to contemplate. He also said the NDP preference for abolishing the Senate is equally impractical, because it would also require major constitutional reform.

So he positions the new Liberal model—a Senate made up of members detached from the parties in the House—as more practical. In fact, the idea has been floating around for some months.

Late last winter, when the scandal surrounding the spending of senators Mike Duffy, Patrick Brazeau and Pamela Wallin was erupting, Sen. James Cowan, then the Liberal leader in the Senate, told Maclean’s he was urging changes to end the venerable tradition under which prime ministers “just name their cronies,” in favour of a committee of eminent Canadians recommending nominees.

As of today, Cowan will have to pitch that idea, and any others he might have, from outside the Liberal caucus.