Trump to Trudeau: Show me the military money

Politics Insider for Nov. 25: Scheer cleans house, a job without a description and the U.S. government sends a 'blunt' letter to Ottawa 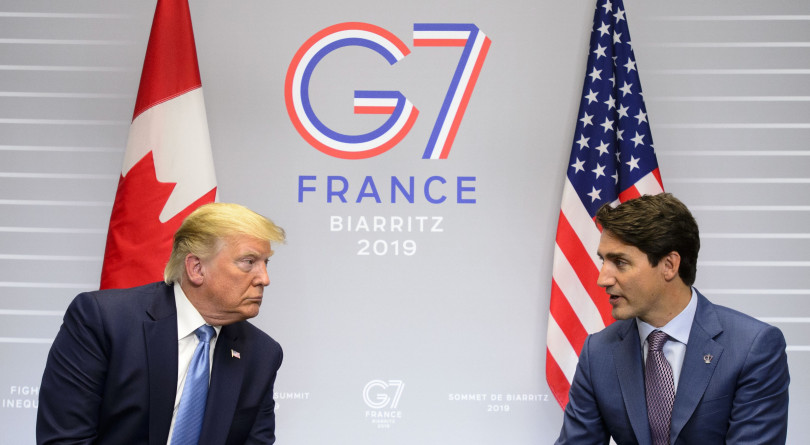 Do the shuffle: Now that Justin Trudeau has picked the team who will join him around the cabinet table, Andrew Scheer did some housecleaning of his own. Scheer dismissed two top advisors who played key roles in the Conservative Party’s disappointing election campaign — his chief of staff Marc-Andre Leclerc and his communications director Brock Harrison — but the question of whether he’ll keep his own job won’t be decided until the party’s next convention in April. Meanwhile Jagmeet Singh re-upped Peter Julian to be the NDP House leader, while naming his fellow B.C. MP Rachel Blaney for party whip. It’ll be Julian’s job to broker talks with the minority Liberals on legislation the government wants passed.

The awkward, almost handshake. An expert in kinesics would have been useful to interpret the microscopic chill evident when Catherine McKenna, the former high profile minister of the environment and climate change, approached Trudeau after taking the oath as the new minister of infrastructure and communities. McKenna, the target of vile sexist attacks when in her last portfolio, offered the PM an outstretched hand for a handshake; Trudeau ignored it and went in for a hug, a brief one. Read more ››

All about the feels: One of the issues Kingston highlights was Trudeau’s creation of the Orwellian-named portfolio Minister of Middle Class Prosperity, which “imparts the message that ‘middle class prosperity’ is as real as ‘natural resources’ or ‘finance,’ not to mention the vagaries of the term. If observers have had a hard time figuring out what the job of middle class prosperity minister entails, the MP tasked with prospering the middle class has yet to offer a clear definition for what the term means. “Well, I define the middle class where people feel that they can afford their way of life,” Mona Fortier told CBC Radio’s The Current. “They have quality of life. And they can … send their kids to play hockey or even have different activities. It’s having the cost of living where you can do what you want with your family. So I think that it’s really important that we look at, how do we make our lives more affordable now?”

In defence of equalization: Jason Kenney’s complaints about equalization are “plainly hypocritical and opportunistic” writes Stephen Maher of the much-maligned program of federal transfers to the provinces:

After an election that turned out badly for them, angry Albertans and Saskatchewanians have been complaining about the transfer of money to other parts of the country.

They point out that Albertans foot the bills—paying in $240 billion more than they received in benefits over the last 11 years. It’s too much, they say. Enough is enough. It’s time to reform equalization. Some angry, unrealistic people are even using it as argument to take Alberta and Saskatchewan out of Canada and start a new country.

I have been waiting in vain for someone, like the prime minister, for example, to point out that this way of looking at the country—as if it is a piggybank into which some provinces make payments and other provinces make withdrawals—misses the point about what it should mean to be a Canadian.

I know that westerners are angry, that they have reason to be angry, but I don’t believe they are right to be angry about equalization. Read more ››

Let’s be blunt: Robert O’Brien, the national security advisor to President Donald Trump, was in Canada over the weekend for the Halifax Security Forum with a message for the Trudeau government: No Huawei, Jose. “When they get Huawei into Canada … they’re going to know every health record, every banking record, every social media post — they’re going to know everything about every single Canadian,” he said in urging Canada to block the Chinese telecom from developing Canada’s 5G network. “What the Chinese are doing makes Facebook and Google look like child’s play, as far as collecting information on folks.” O’Brien and his boss had some other advice for Canada, spelled out in a “blunt” letter the U.S. government sent to the Department of National Defence, according to Global News: boost military spending to meet our NATO targets. Defence Minister Harjit Sajjan downplayed the letter, but former Conservative defence minister Peter MacKay called it “a very serious diplomatic slap — not on the wrist, but in the face.”

Let’s hear it: Help us better understand what you’d like from the Maclean’s Politics Insider newsletter. This short survey will only take a few minutes to complete. We really appreciate the feedback.