In the wake of the Charlevoix summit, a potentially massive trade war looms and multilateralism suddenly means everything (or nothing) 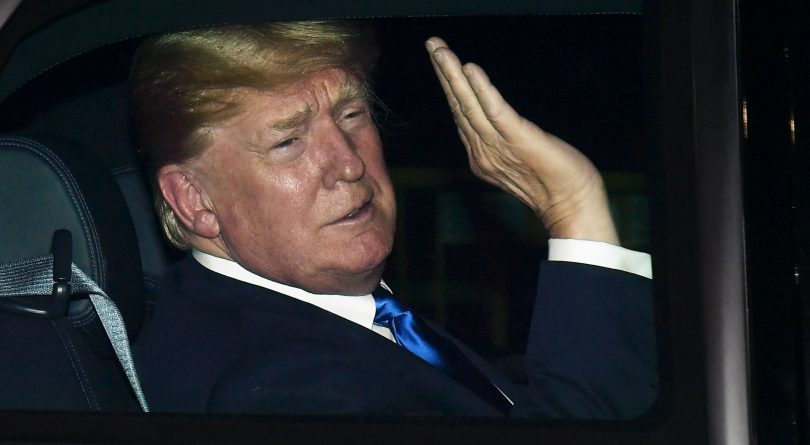 U.S. President Donald Trump waves to the crowd after arriving in Singapore on June 10, 2018. (Photo by Kyodo News via Getty Images)

Much of the fun of analyzing what happens at a Group of Seven summit comes in mocking the absurdity of all the energy expended on trivial matters. Which of the leaders of U.S., Japan, Germany, France, the U.K., Italy and Canada sweated the most to move the needle fractionally on some obscure priority? How much did the sherpas—as the leaders’ top summit aides are known—agonize over where the commas and semi-colons fell in the final communiqué?

And so it might have been for the G7 that Prime Minister Justin Trudeau just hosted in pretty Charlevoix, Que. For instance, this seemed like an instant classic: Officials actually admitted they fussed obsessively over the difference between “the” and “a” in the communiqué’s wording on trade! Ha! Specifically, they changed the proposed “we underline the crucial role of the rules-based international trading system,” to the U.S.’s preferred wording “we underline the crucial role of a rules-based international trading system.”

But hold on. Come to think of it, maybe that’s not so amusingly trivial. In fact, maybe the choice of definite or indefinite article is laden with meaning. After all, the crisis now confronting the big democratic economies is over Donald Trump showing zero respect for the rules-based system that has for decades given them all so much trade-driven prosperity. Trump imagines a new system of his own devising. When you read it like that, the difference sums up everything that went so terribly wrong just after the U.S. president exited the summit.

By now, you’ve probably heard all about it. Trump took off early on Saturday to fly to Singapore for his meeting with North Korea’s Kim Jong-un. After he left, Trudeau held a news conference in which he said—with respect to Trump slapping tariffs on imported steel and aluminum—that Canadians “will not be pushed around.” Taking to Twitter, Trump lashed back at “Justin’s false statements,” and his surrogates dutifully took to the Sunday morning TV talk shows to denounce Canada’s PM. “He really kind of stabbed us in the back,” Larry Kudlow, Trump’s chief economic advisor, said on CNN.

So much for the punctilious word choices of G7 communiqués. Plunged back into the verbal free-for-all of Trump’s Twitter account, and his sycophants’ talk-show bluster, Trudeau’s crew wasn’t entirely sure what hit them. Or rather, they weren’t sure why. On the remarks from Trudeau that evidently set off Trump, one senior Canadian government official said, “I think he showed an incredible amount of restraint.” It’s true that Trudeau didn’t say anything he hadn’t before against the steel and aluminum tariffs, or on Canada’s plan to impose retaliatory tariffs by July 1.

But trying to discern some underlying logic in Trump’s hair-trigger reactions doesn’t get anyone very far. As for what comes next, it looks bad. Along with steel and aluminum, he’s now threatening to punish auto imports from Canada and Europe—a dire prospect. Against this backdrop of escalating trade war, the future of the NAFTA renegotiations Trump imposed on Canada and Mexico is hazy at best. Time is running out on securing even the most tentative of agreements on the outlines of a deal before Mexico’s July 1 presidential election. Then come the fall U.S. congressional midterm election campaigns.

The senior Canadian official who spoke with Maclean’s after Trump’s post-G7 tantrum held out scant hope for calmer days ahead. “As long as the president maintains the trade policy he has, we are going to have these discussions and flare-ups,” he said. Trudeau has already lavished political and diplomatic resources on the NAFTA file. He’s deployed his not inconsiderable charm; his foreign minister, Chrystia Freeland, has worked her storied networks. But, said the official, “There are only a certain number of things we can control because of the relative size of our economies.”

What that means is though both countries would suffer needlessly in a trade war, Canadians will hurt more. Blaming Trudeau must be awfully tempting for his domestic political rivals. So far, however, Conservatives seem to realize that they must avoid seeming to side with Trump, who is deeply unpopular in Canada. So Conservatives like Doug Ford, Ontario’s new premier, and Jason Kenney, who might be Alberta’s next, both backed Trudeau after the G7. Even former Tory prime minister Stephen Harper told Fox News that Trump is picking the wrong fight, and should instead tackle the U.S. trade imbalance with China.

Federal Conservative leader Andrew Scheer is left in a tricky position. Rachel Curran, who was Harper’s policy director when he was PM, said Scheer can safely fault the Liberals for their NAFTA renegotiating strategy, but must not oppose Trudeau’s response to Trump’s tariff assault. “It’s not credible at this point to say the retaliatory tariffs are a bad idea,” Curran said. “They are good and they are well-targeted.” It’s worth recalling that on his first official trip to Washington as Tory leader early this year, Scheer said in a speech, “We want to make sure we’re here to support our government’s efforts in maintaining and protecting what we have in NAFTA.”

Thus, this is shaping up as a weird moment in domestic politics. Likely the worst crisis Trudeau’s government will face, and yet it doesn’t translate neatly into a clash between government and opposition. The international implications are also unusual. With bilateral Canada-U.S. relations strained as never before, any multilateral initiatives that remain possible take on unusual symbolic importance, almost by default. Consider the conventional G7 summit work drowned out by Trump’s noisy departure, like the $3.8 billion committed for educating girls in conflict zones, or the pledge from five of seven summit members to combat plastics pollution in oceans, with Canada kicking in $100 million for the cause.

In other words, the usual worthy, dull G7 summit communiqué fodder. It’s the sort of feel-good stuff that has always been so easy to laugh off as the pre-packaged, underwhelming product of an overly fussy, formalized process. That is, until Trump demonstrated his own version of a more spontaneous alternative. His antics make multilateralism sound less like an empty slogan and more like an essential vision. It’s enough to leave one cheering for a rules-based process. Wait, make that the rules-based process.