Philippe J. Fournier: A raft of new polls have come out with diverging scenarios. A key takeaway: keep your eye on the big picture. 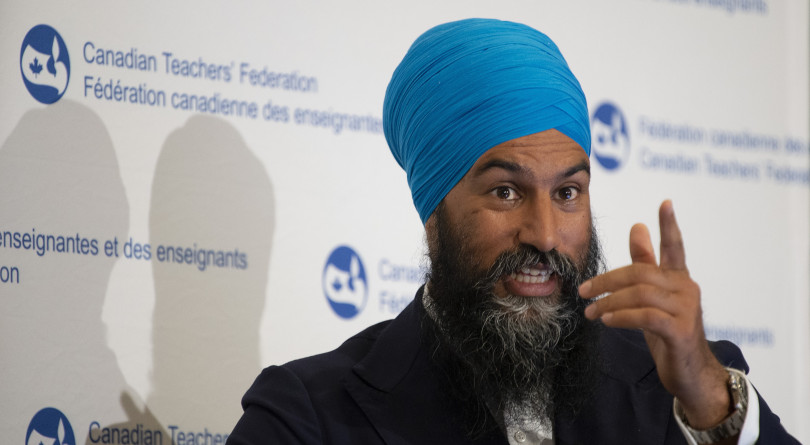 NDP leader Jagmeet Singh gestures to the crowd as he speaks to the Canadian Teachers Federation annual general meeting in Ottawa on July 11, 2019 (Adrian Wyld/CP)

With the October federal election in their crosshairs, Canadian pollsters have kept busy so far this summer: no fewer than a dozen polls have been released since the summer solstice. However, the high amount of polling has not yet resulted in any kind of consensus as to where the parties stand less than 100 days from election day in Canada. In fact, when taken individually, these polls describe radically different landscapes—and hence depict completely diverging scenarios—from solid Conservative majority to strong Liberal minority.

Perhaps the lack of a clear narrative could be the narrative at the start of the campaign? We’ll have to wait and see.

Amid the confusion it may cause to casual readers, we offer today a brief state of where pollsters stand compared to each other—and compared to the 338Canada weighted average. (The 338 average has been adjusted for the flurry of polls that have been published since last Sunday’s projection in Maclean’s. A full federal update will be available this coming Sunday.)

We take into consideration the latest polls from eight firms published from late June to mid July: The Angus Reid Institute, Ipsos, Forum Research, EKOS, Abacus Data, Campaign Research, Mainstreet Research and Nanos. (Léger’s most recent poll dates back to early June, so it was only fair not to include it in this analysis since the projection has changed significantly since Léger was last on the field.)

(All the federal polls are listed on this page.)

The latest 338Canada popular vote projection gave the Conservatives an average national lead of two points over the Liberals, and the seat projections resulted in a dead heat between the two parties. However, these are weighted averages. As mentioned above, these polls do not tell the same story when taken individually.

Here is where these polls stand compared to the 338 average for the Liberals (x-axis) and Conservatives (y-axis): 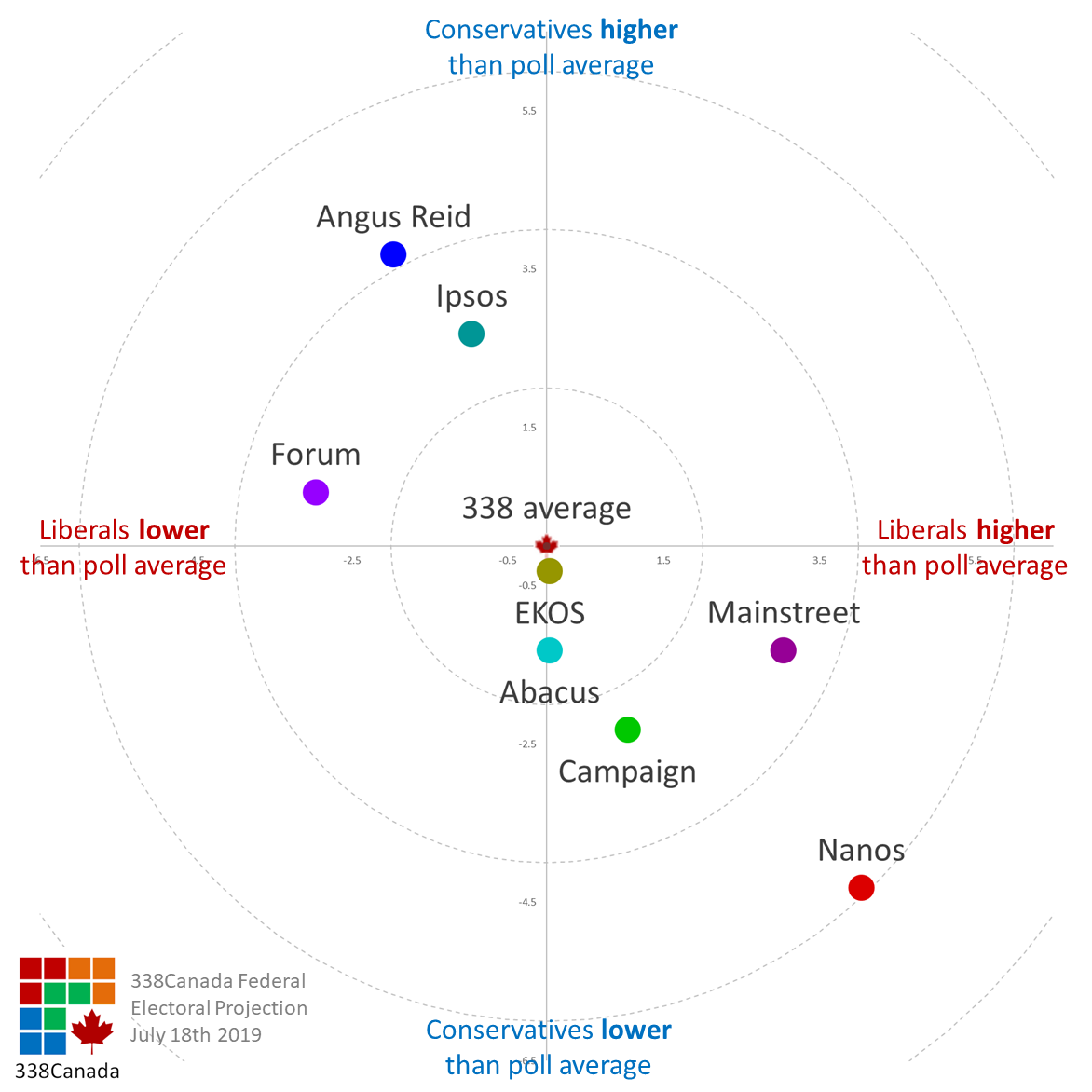 The widest gap in the numbers is between Nanos (whose latest poll gave the Liberals a six-point lead) and the Angus Reid Institute (which has the Conservatives ahead by 8 points). Nevertheless, we notice that these two diverging polls are almost perfectly diametrically opposed on the graph, with several other pollsters measuring gaps somewhere in between. The other firms are all located within a four-point radius of the average.

We mentioned last Sunday that there was also a noticeable disagreement on where the NDP stood nationally. In its latest weekly tracker, Nanos measured Jagmeet Singh’s party at 19 per cent—a score eerily similar to its 2015 result under Tom Mulcair. The latest Ipsos/Global News measured the NDP at 18 per cent, also somewhat higher than the current average.

Mainstreet and EKOS go the other way: both these firms have the NDP at 10 per cent nationally, or about four points lower than the 338 average. Both these polling firms use IVR technology (automated polling done by phone), which may or may not be a coincidence.

Here is the graph for the NDP (x-axis) and Greens (y-axis): 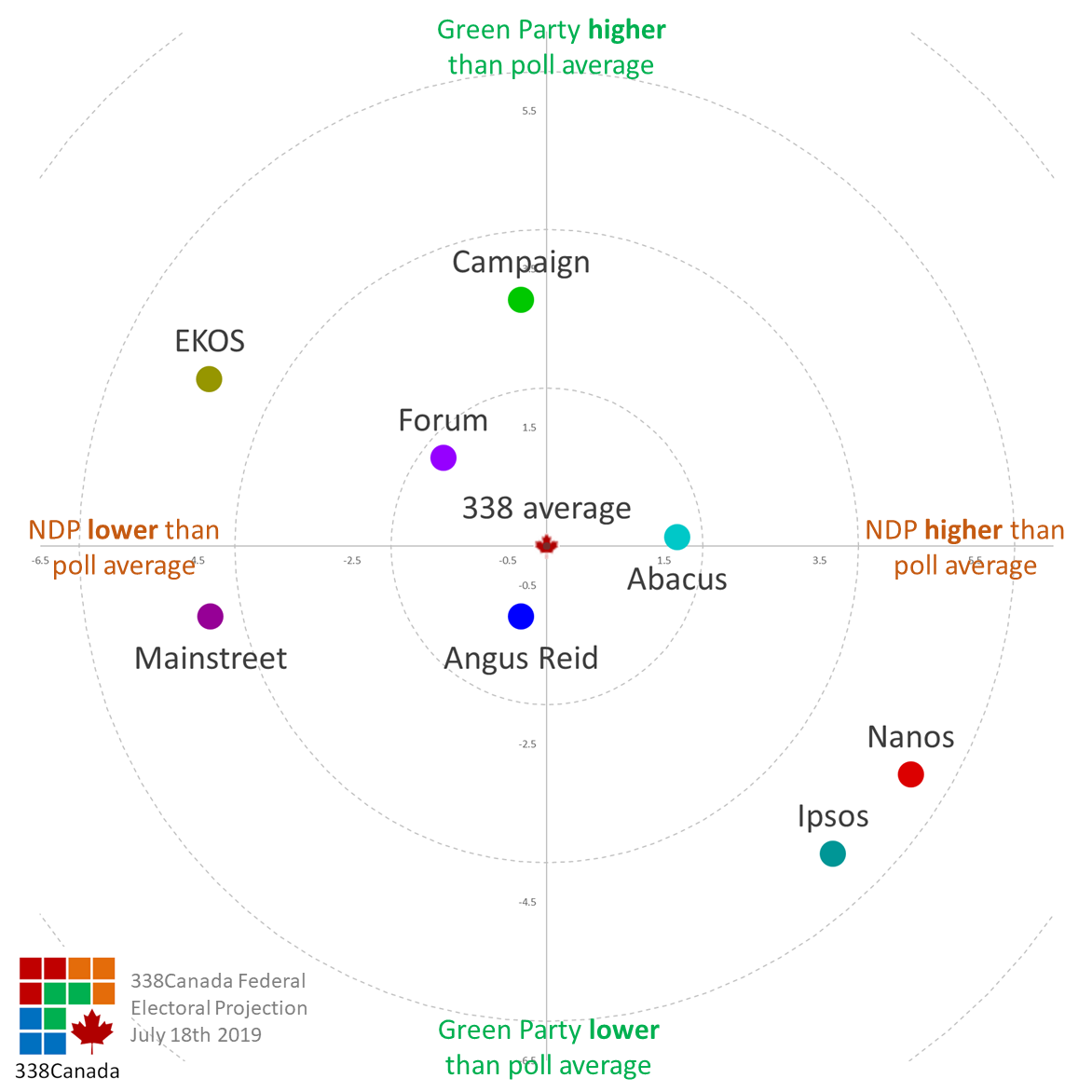 For the Green Party, the gaps are in the same range as the NDP’s. Both Nanos and Ipsos have the Greens lower than their current average of 10.5 per cent. On the opposite spectrum, Campaign Research and EKOS have the Greens tied or above the NDP.

I know what many of you are thinking, and no: it’s not a conspiracy. In fact, I would be far more inclined to believe some sort of Grand Conspiracy if these polls were to be in complete agreement with each other.

Keep in mind: Polls naturally fluctuate, and samples differ from one firm to another. Above all, remember that all of these polling firms are chasing a constantly moving target.

We compile the results, keep our eyes on the big picture, and we don’t let one single poll set the narrative.

The scientific method remains the best approach to understand the world.