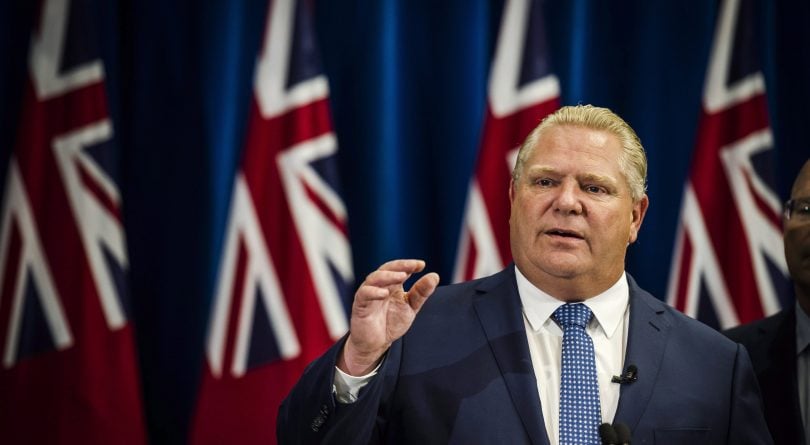 I’ve lived in Ontario for 46 of my 52 years but every time I make a conscious decision to cover its provincial politics it seems as exotic as any assignment anywhere. The red sandstone legislature building at the top of Queen’s Park in Toronto is a repository of a people’s neuroses, a Fort Knox of United Empire Loyalism, and I suppose I should have been less surprised than I was to discover that in a key spot of hallway near one of the entrances it features impressive photographic portraits, separated by a doorway, not just of Queen Elizabeth, but of Prince Philip. A portrait of the Queen is duty. A portrait of them both is love.

For 20 years I’ve been reading, and sometimes writing, snark about the crucifix hanging over the Speaker’s chair in Quebec’s National Assembly. An affront to secularism. What, then, to make of the prayer with which Ontario legislatures begin sitting each morning? Two, in fact. The Lord’s Prayer, with the “For thine is the Kingdom” doxology I was taught to associate with Protestantism, preceded by another text which, I’m told, rotates from day to day. Monday’s text, which was read aloud while members bowed their heads, sounded scrupulously non-denominational, of course, but who are we kidding, agnostics don’t pray. As I sat in the press gallery seats over the speaker’s chair, one line stood out to me: “Give us a deep and thorough understanding of the needs of the people we serve.”

A few minutes later, Andrea Horwath came out swinging. The leader of Ontario’s NDP and, therefore, of its official opposition, called Doug Ford’s proposed changes to Toronto city council and four regional governments “the act of a bully, not a leader… the most anti-democratic act this province has seen in years.” Her question to the premier: “When did he decide to be a bully?”

Ford did not accept the premise of her question. “I criss-crossed this province and campaigned on accountability, trust, reducing the size of government,” he intoned. The premier doesn’t have a conversational or confiding tone. He intones, his voice high-pitched but booming and martial in its cadences, like the narrator in an old Hollywood movie. In all his criss-crossing, he declaimed, “Not one single person came up to me and said, ‘Doug, I want more politicians.’ ”

That was question period, pretty much, with variations to last an hour. Horwath skated up to the limits of acceptable parliamentary language, and was in fact warned twice by Speaker Ted Arnott to withdraw specific epithets, which she did promptly and without fuss. What she left on the table was as harsh as she could make it. “The premier’s secret plot, cooked up in a backroom and hidden from 14 million people,” she called it at one point.

The premier kept banking on his criss-crossing, and the—by his account—utter unanimity of the message he heard from Ontarians. “Every single person I talked to in Toronto,” he inveighed, “said city hall is dysfunctional.” They had, in fact, told him “the infrastructure is crumbling right under our feet.” Every single one of them, presumably.

Horwath was unswayed. “A vendetta from a man who doesn’t want to lead, he wants to bully,” she said.

“Why are you so angry?” a Conservative backbencher said aloud. One can hear heckling much more clearly in the Ontario legislature than in the House of Commons.

And yet Horwath persisted. “A deeply chilling sign of weakness and insecurity,” she said. (There were questions too, but the questions mattered less, it seemed, than the carefully curated and unflattering character sketches of the premier that preceded each one.)

Ford’s defence for seeking to merge wards and cancel elections in mid-campaign, after nominating deadlines, without having made any specific promise to do so during a still-recent campaign, was essentially that he is eager to fulfill the mandate laid out in the Monday prayer: He claims a deep and thorough understanding of the needs of the people he serves, and is eager to put it into practice. Not that the premier makes any claim to divine inspiration for his sense of mission: he heard all he needed from the criss-crossing and the every single person.

In fact, as Horwath continued to castigate him about having failed to consult, Ford seemed to keep right on believing that consultation would be an excellent idea, if done right. “Maybe we should go up to the people on the street,” he chanted, “door-knock, and ask them, ‘Do you want more politicians or less politicians?'”

The effective answer is, sure he can trump calls for a real consultation by imagining a fantasy consultation that would go the way he wishes it would go. He’s the premier of a fresh majority government. Scan the government benches for tells that might indicate internal dissent, you’ll find none. Caroline Mulroney and Rod Phillips, the rookie ministers who are widely seen to represent High Red Toryism in this otherwise pretty blue government, didn’t make a show of rising more slowly to applaud their premier’s incantations. Enthusiasm seemed evenly distributed across the Conservative ranks. In scrums outside the legislature later, Horwath admitted as much. “In concrete terms, we don’t have very many arrows in our quiver,” she said.

That’s all the more true because, as anyone is reminded who contemplates the relics of deep tradition that decorate the legislature, the spirit of freedom has not often shone brighter in Ontario than the willingness to go along to get along. Ontario is a deeply legitimist polity. It put up with film-board censors and pursed-lipped liquor-board monopolies long after such excesses were laughing stocks in other parts of the country. It tolerated darker excesses of authority, like the gay bathhouse raids of 1981 or the draconian crushing of the G20 riots in 2010—not all Ontarians, not by any means, but more than civil libertarians or other flavours of idealists would have hoped.

Consulting his gut more than any manifesto or spreadsheet, Ford wants to get on with building more of the sort of Ontario he knows and likes, and less of the sort of Ontario that gets in his way. No leader ever enjoys a perfect guarantee that he will be permitted to deliver that sort of thing. But in Ontario, leaders have normally enjoyed leeway their colleagues who face more ornery electorates would envy. And the leeway is all the greater at the beginning of a government’s term, when people have the general feeling that they’ve fought and argued all they want to fight and argue for a while. Ford is sitting through the summer because he knows he’ll never have a first summer again. He will do what every single Ontarian told him to do, or at least that’s how he remembers it, and for now that’s enough.