'We need to plank it': Theresa Tam's quote of the day

Politics Insider for March 20: Canada-U.S. border restrictions could come into effect tonight, social distancing could last for months and Measha Brueggergosman takes to the airwaves 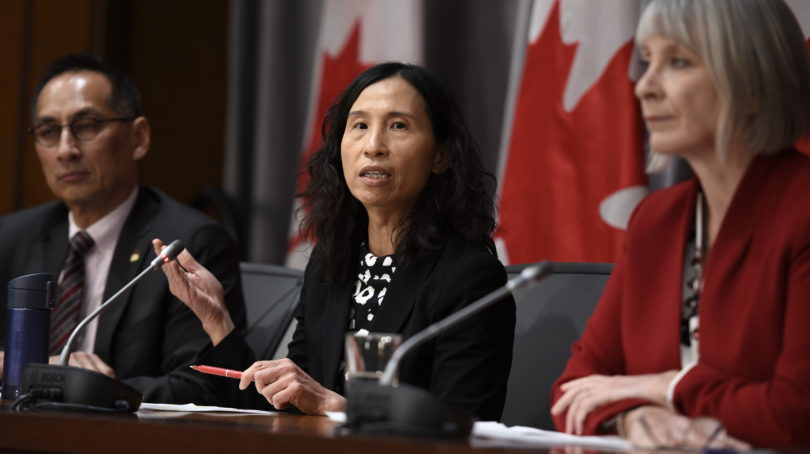 “We need to plank it.” That’s how Theresa Tam, Canada’s chief public health officer, yesterday described Canada’s collective mission to “flatten the curve” of coronavirus cases. Tam’s plea, both urgent and a moment of levity, set the tone for the day. Earlier, Prime Minister Justin Trudeau spoke to reporters outside Rideau Cottage. His remarks were mostly meant to comfort Canadians, a break from his streak of dramatic announcements.

The sorta newsy exceptions: Trudeau said Canadians can expect social distancing measures to last not just weeks, but months. The PM also predicted the new Canada-U.S. border restrictions would likely take effect tonight. But that was that from the PM.

Economists who took stock of Wednesday’s $82-billion economic plan have now submitted their grades. Kevin Milligan, a UBC professor who sat on Trudeau’s council of economic advisors in 2014—so he knows a thing or two about how this government ticks—picked apart the Liberal plan, explaining the government’s likely rationale, in a tweetstorm built for econ wonks (and some normal people, too).

Canada needs crisis basic income now: Ken Boessenkool, a former Stephen Harper advisor, wished Team Trudeau had taken a different tack. Writing in Maclean’s, Boessenkool advocates for a $2,000 cheque in the mailbox for every Canadian who filed a tax return last year. The Liberal plan forces too many people to fill out applications that take too long to process, he writes, which means money doesn’t get out the door fast enough to Canadian workers. That means doing fiscal policy differently than most finance ministers of the last 20 years, who have typically made federal benefits “more targeted, less indiscriminate, and less costly.”

The parliamentary budget officer, Yves Giroux, will assess the government’s spending plan. Readers of yesterday’s Politics Insider will have gotten a sneak-peek at Giroux’s back-of-the-napkin evaluation. Prediction: The PBO’s official report will have more charts.

No Canadian can say public health officials and politicians in charge of fighting the pandemic have been invisible. Trudeau has held what amount to daily press conferences, as have Tam and a phalanx of cabinet ministers. But Justin Ling, writing in Maclean’s, says quantity doesn’t guarantee quality. The briefings often include incomplete information and undeveloped programs. And public officials don’t make available vast amounts of useful data:

Other countries show how useful it can be to get it right. South Korea has set up a dashboard to let reporters, researchers, and the public visualize data on new transmissions and tests. Germany issues daily reports with granular data, including on when the onset of symptoms began. Singapore lists every single new confirmed case of COVID-19 in the country, including where they likely caught the virus and on which dates.

The feds are throwing millions at rapid research into the coronavirus. Yesterday, the Canadian Institutes of Health Research announced the 49 recipients of a $25.8-million tranche of the $275 million that’ll end up going to scientists. So far, 96 research teams have received nearly $52 million. Check out a detailed list of projects here.

Sometimes soldiering on is the wrong thing to do: Conservatives are still campaigning for their party’s leadership, and the party hasn’t budged on the various timelines leading up to the convention vote on June 27. Maybe it’s time to rethink that plan, writes Andrew MacDougall.

The Better Business Bureau is here to remind you that a global pandemic is, sadly, “great news” for scammers. You’ve probably at least received a few annoying texts. The BBB cautions consumers against “fake cures, phoney prevention measures and other coronavirus cons.” Obvious advice, perhaps, but these are anxious times. Stay vigilant.

We’re all spending more time at home. Canada’s musicians are answering the call to entertain their fans—even from their living rooms. Tonight, watch Canadian soprano Measha Brueggergosman perform live in concert at 7 p.m. ET at the Great Hall in Toronto. This is our first in a series of free, livestreamed musical events over the next few weeks.