In Canada and around the world, weekends no longer exist 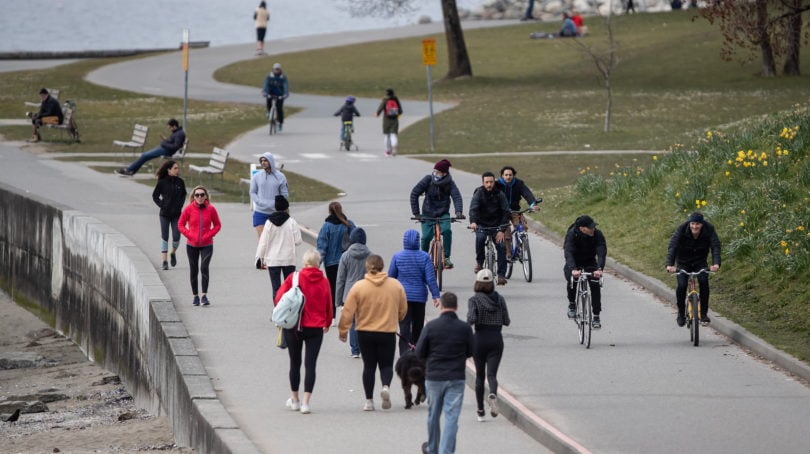 People walk and cycle on the seawall between English Bay and Sunset Beach, in Vancouver, on Sunday, March 22, 2020. (Darryl Dyck/CP)

Does the news even slow down on weekends anymore? A better question: Now that so many people are working from home, do weekends even exist anymore?

For the Canadian government, the answer is firmly “no” on both counts. Justin Trudeau announced Parliament will reconvene on Tuesday to pass his government’s hefty $82-billion aid package to combat the economic devastation of COVID-19, which has, as of Sunday night, killed more than 14,600 people worldwide, out of more than 330,000 cases. (Just under 1,500 of those cases, and 20 deaths, have been in Canada.) To respect the new rules of social distancing, a little more than 30 MPs will attend the reconvened session of Parliament, including about 15 Liberals, 11 Conservatives, three each from the Bloc Québécois and New Democratic Party, and one from the Greens. Parties are expected to move swiftly to pass the bill in a multi-partisan fashion, and therefore skip question period.

But while the bill will likely receive multi-partisan support, it also underscores several Liberal causes in the way money will be dispersed across the country. It boosts the Canada Child Benefit, offers a reprieve on student loans, extends tax filing and payment deadlines, earmarks $305 million to First Nations community support and $50 million to women’s shelters, and offers up billions for emergency employment insurance. What it lacks, according to Conservatives, are specific measures aimed at businesses, including a six-month GST refund. Expect the Tories to try and include similar measures in whatever aid package materializes on Tuesday.

The cruel oxymoron of self-isolation. Also in the aid package: doubling the federal homelessness care program, injecting funding to the tune of $157 million. Cathy Crowe, a long-time street nurse and a visiting practitioner in the Department of Politics at Ryerson University, addresses the issue in Maclean’s, writing that self-isolation and hand-washing are futile tips when you don’t have a roof over your head.

Being in a 50- to 500-bed shelter is a large gathering, and I’ve never seen six feet between cots or mats. Imagine a coughing neighbour on the top level of your bunk bed. If a homeless person does practice social distancing and the avoiding of large gatherings by creating an outdoor encampment, they are evicted. Self-isolation for the homeless population is a cruel oxymoron.

Calm during a crisis. In his press conference on Sunday, Trudeau put on his dad voice and shifted the national tone by thanking all the kids out there “for doing math class around the kitchen table” and “washing your hands a lot.” (Read the full transcript here.) It was a soothing message from a man who’s still not declaring a national state of emergency, even though Nova Scotia became the most recent province to do so, following many other provinces. That means Nova Scotians are barred from gathering in groups larger than five, and police have the authority to fine individuals $1,000 and corporations $7,500 for each offence.

If Trudeau were waiting for this to truly become a national emergency, that goalpost is getting closer: the Northwest Territories have declared their first case of COVID-19. The person is in self-isolation after travelling across B.C. and Alberta before returning home to Yellowknife, marking the first case to strike the northern territories. Meanwhile, another “first” struck Canada’s south: Toronto faced its first COVID-19 death. The man, in his 70s, had recently travelled to the United Kingdom before passing away on Saturday.

No-fly zone. The government is hoping that recent border closures and repatriation efforts will help seal the virus and slow its spread. The border with the United States officially closed to all non-essential travel Friday night, and Minister of Health Patty Hajdu says she’s considering criminal penalties for Canadian travellers who don’t self-isolate after returning home. “When we say that you must stay at home for 14 days, that means you stay at home for 14 days,” she told reporters on Sunday. “You do not stop for groceries, that you do not go visit your neighbours or your friends, that you rest in your house for 14 days. No exceptions.”

Two countries that have trapped Canadians inside are Peru and Morocco, which have shut down all airports. About 444 Canadians, who were tested and found asymptomatic of COVID-19 before boarding, were flown to Montreal on a special Air Canada flight on Saturday night, and will have to self-isolate for 14 days. A similar action in Peru will likely follow. “Getting the plane is usually the easiest piece. That’s step one,” Minister of Foreign Affairs François-Philippe Champagne said on The West Block on Sunday. “After that, I need to negotiate, country by country…. Once we have a lock on an aircraft, then it’s really making sure that I’ll be able to get that plane to land, so getting landing permission, getting safe passage for the crew and making sure that we have proper boarding procedure.”

The elephant in the room that everyone’s too busy to look at. A Canadian-led treatment for COVID-19, helmed by veteran scientist Michel Chrétien, is a distinct possibility, which would of course be a boon to global health. But there would be an ancillary benefit, too: it could relieve strained relations between Canada and China, which have swelled around Canada’s detainment of Meng Wanzhou, China’s subsequent detainment of two Canadians and Huawei’s adamant desire to help build Canada’s national 5G network. In Maclean’s, Nick Taylor-Vaisey and Jason Markusoff write at length about those repercussions:

Now, as China faces a public-health disaster that has exploded into a global pandemic, comes the possibility of a political game changer. Trials for the coronavirus drug developed in Montreal are a truly collaborative project between the two countries, with funding from Canadian sources fuelling lab work undertaken by Chinese scientists. The Lazaridis Family Foundation has already contributed $1 million to the cause, enough to start clinical trials. The initiative could contribute to a shift in frosty relations that can only help the Michaels—although Chrétien, either very much the scientist or displaying a political finesse that rivals his sibling’s, leaves it at touting the benefits of academic freedom. “Basic science is worth doing for the sake of doing it, not knowing what the results will be in the short term or medium term,” he says. “Long-term returns can be big.”

No time for partisan politics. Looking briefly at the federal Conservative leadership race, so far, mostly lower-polling candidates have urged the party to postpone its vote, which is currently scheduled for June 27. We can now add MP Erin O’Toole to that list. O’Toole is, depending on who you ask, either tied for first or a likely second-place finisher to frontrunner Peter MacKay in what has rapidly become a dwindling field. Last week, candidates Rick Peterson and Rudy Husny effectively dropped out, citing COVID-19 as an impossible fundraising hurdle.

But not every erstwhile candidate dropped out for pandemic-related reasons. Jim Karahalios was officially disqualified on Friday following a series of complaints regarding his behaviour. Sources say it stems from a public letter he signed, targeted at O’Toole, whose campaign chair is a Muslim lawyer named Walied Soliman. The letter was titled, “Say NO to Shariah Law. STOP Erin O’Toole.” In response to accusations of racism and Islamophobia, Karahalios posted an image to his Facebook page of himself smiling while an angry mob (led by black people) rush toward him, brandishing weapons. His appeal to stay in the race was denied.

An epidemic of loneliness. In Maclean’s, Paul Wells urges Canadians to remember the feeling of what it’s like on this, the “rainy day” we all worried might come.

But such pleasant moments don’t fill an emptiness many of us feel. I’m lucky to have friends in the arts, especially musicians. It was obvious this crisis would be hard on them. In a gig economy with no gigs, livelihoods are endangered quickly. But the spiritual cost quickly made itself felt too. Creators want to create, audiences want to attend, cooks need feedback, profs need eye contact.

“Art is about one thing,” the opera director Peter Sellars said in a 2018 talk at Houston’s Rothko Chapel. “It’s about shared space. We are sharing this space. That is the point. Any performance is human beings sharing space.”