Well, that was helpful

Paul Wells: The one-liners were zinging. But when 11 people share two hours of screen time, it doesn't leave room for much else. 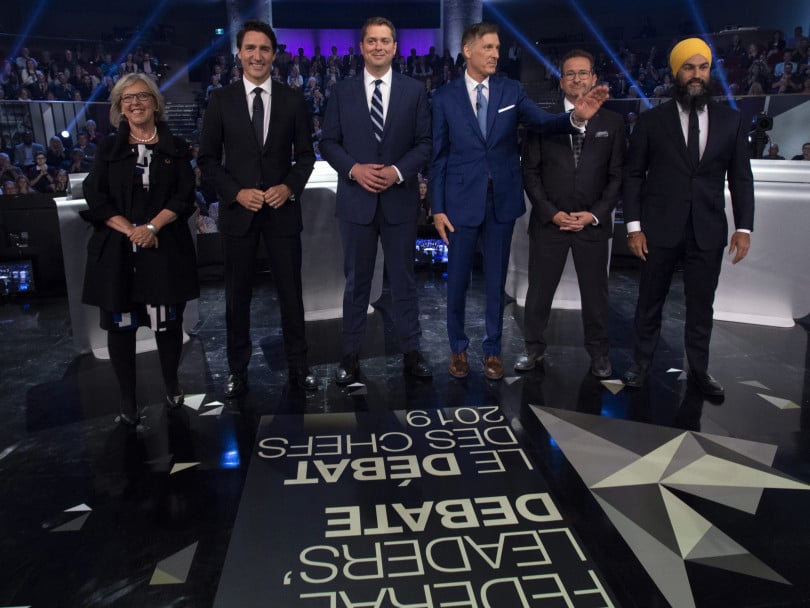 May, Trudeau, Scheer, Bernier, Blanchet and Singh pose for a photo before the Federal Leaders Debate on Oct. 7, 2019 (Adrian Wyld/CP)

Several minutes later,  Toronto Star Ottawa bureau chief Susan Delacourt promised lots of further debate on the issue at hand, which was the economy. Or Indigenous issues. Or something. It was hard to tell.

By the second-last block of the evening, pessimism was setting in. “You’ve talked over each other and you’re both out of time,” Dawna Friesen, chief anchor of Global National, admonished Bloc Québécois leader Yves-François Blanchet and NDP leader Jagmeet Singh.

At last, CBC anchor Rosemary Barton, who has perhaps had more experience than her colleagues running a broadcast as a timeshare, arrived to run the last block with the kind of I-have-had-just-about-enough-of-you tone it could have used earlier. But by then the show was nearly over. And the six leaders on stage had learned what could perhaps have been predicted: that when 11 people share two hours of screen time, it’s hard to go in depth.

This is no fault of the moderators, who have had to endure altogether too much stupid backseat driving about their supposed political biases and, worse, their gender in the weeks leading up to this event. It’s not even really the fault of the Liberal-designed debate commission, under the stewardship of former Governor General David Johnston, who set the general terms for the debate. It’s just that if you invite everyone you can think of to a party, and then put a low cap on the total amount of available time—was a three-hour debate a physical impossibility? Would running each of two debates over two consecutive nights have violated a law of physics or ruined the leaders’ precious tour plans?—it’s hard to eke out more depth than you can get from a typical instalment of the daily House of Commons Question Period.

Justin Trudeau in particular seemed to struggle to push out everything he wanted to say in the time he had to say it. He’s been doing town hall tours at regular intervals since 2015, which is both laudable democracy and, I used to think, great practice for the debates that would inevitably follow. But in a town hall you can drone on and on, and on Monday Trudeau couldn’t. It cramped his style. If only he’d taken a chance to show up for an earlier, way less crowded debate with a simpler format. You had to know that was coming.

And much more than in last week’s French-language non-league-sanctioned TVA Face à Face debate, Trudeau was unable to skate rings around most of the other leaders, just because more of them speak English and, one suspects, Andrew Scheer had finally done some serious preparation.

“There is a vacancy for the leadership of the Ontario Liberal Party,” Scheer told Trudeau when the Liberal leader came after him for the evening’s fourth or fifth time with Ontario premier Doug Ford’s record, “and if you’re so obsessed with provincial politics, go and run for that.”

It was a good line, and perhaps partial payback for a dig Trudeau got in earlier. After Scheer and Maxime Bernier, the former Conservative turned nativist leader of the People’s Party of Canada, had gone a couple of rounds, Trudeau told Bernier his only distinguishing characteristic is that “you say publicly what Mr. Scheer thinks privately.” Scheer, inexplicably, decided to let that go unchallenged. Trudeau grinned at his ability to put that bit of rhetorical payload onto its target, and well he should. It sums up the Liberal campaign message.

It’s frustrating to rate one-liners, but the evening didn’t leave room for much else. The Liberal was boxed in, much more effectively than on TVA, by Elizabeth May, who refused to let him sell himself as an effective climate warrior. “Please God you don’t get another majority,” she told Trudeau.

The crowded format served up a few blessings. Bernier didn’t get to say much. Blanchet, the Bloc leader, was less effective than on TVA, not because there is any particular problem with his English but because his cadence in either language is so slow he could barely say anything before a member of the debate-moderating task force cut him off. He did say arresting Huawei executive Meng Wanzhou “may have been a big mistake,” which I will take as his way of letting everyone know that a sovereign Quebec would ignore its obligations under extradition treaties.

Blanchet did manage the night’s most interesting pincer move against an opponent. He quoted Scheer’s Quebec lieutenant, Alain Rayes, who’s been going around Quebec saying that only a Scheer government could keep Justin Trudeau from going to court against Bill 21, the Quebec government’s no-civil-servants-in-religious-headgear law. The claim flatters Trudeau, who is promising only that he’ll keep the option of a court challenge open, but it is altogether too characteristic of too many federal parties that Scheer has a senior party figure portraying him in Quebec as the defender of a law Scheer claims, outside Quebec, to oppose.

I’d have liked to hear a longer discussion about Bill 21. I’m pretty sure I did on Sept. 12. But meanwhile the one-liners kept zinging. In these tight rhetorical corners, Singh had yet another strong night. So often he seems this campaign’s only happy participant, and where he sometimes falters when asked to fill in the details of his proposals, there was no danger of anyone doing that on this night. So he was fine.

Trudeau repeatedly called his “plan” to magically get to net-zero emissions by 2050, during what would be his tenth majority government, “doable.” There was no time for him to explain how that could possibly be. On the impressive array of political staffers he sent to pressure Jody Wilson-Raybould on SNC-Lavalin, he told Scheer, “The responsibility of any prime minister is to stand up for jobs. And what you’re saying is that you wouldn’t have done that.” There was no time to ask him how he’s stood up for jobs if the trial Wilson-Raybould wanted is still scheduled.

Democracy was served, by 11 people plus members of the studio audience and others like it from coast to coast to coast, in a tidy package that had the decency to end before the most lucrative part of prime time began. The government designed it all, so how could it be imperfect? We’ll get more perfection in French on Thursday. Count your blessings.