What a Democrat-controlled House means for the new NAFTA deal 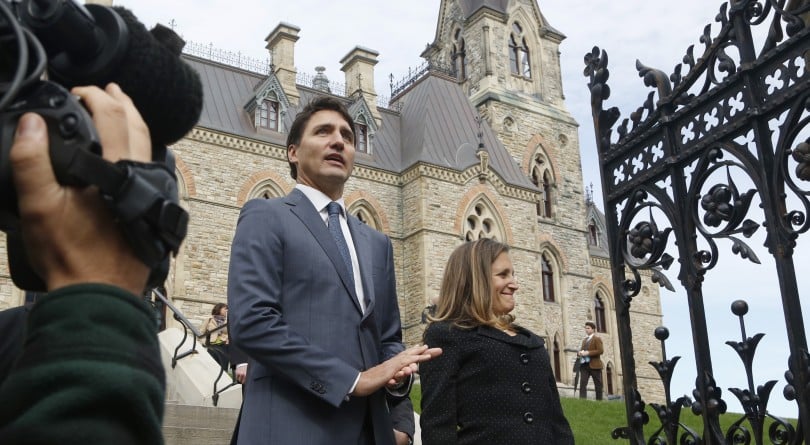 Senior Canadian government officials are throwing cold water on speculation that the shift in Washington’s complex power structure as a result of the United States midterm congressional elections might put the painstakingly renegotiated North American Free Trade Agreement in jeopardy.

A government official with detailed knowledge of the policy and strategy of Prime Minister Justin Trudeau’s trade team said their expectation is that the Democrats, who won control of the U.S. House of Representatives, likely won’t try to pick a fight with President Donald Trump by blocking the United States Mexico Agreement (USMCA), the successor to NAFTA.

Some observers have predicted Democrats might flex their muscle by pushing for the deal to be revisited to strengthen certain parts, perhaps including provisions on labour rights. But there’s no mechanism to make targeted changes to satisfy the new majority in the House—and the Trump administration, like the Canadian and Mexican governments, will not want to risk reopening the whole, complex agreement, which took 13 arduous months of bargaining to finalize.

The Canadian official, who spoke to Maclean’s on condition of anonymity, said the Trudeau government continues to expect USMCA to be signed, in all likelihood, as previously planned on Nov. 30. That’s the earliest date, under U.S. law, that Trump can sign the agreement reached in principle on Sept. 30. As well, Nov. 30 is the final day Mexico’s outgoing president, Enrique Pena Nieto, holds power before inauguration of the country’s president-elect, Andres Manuel Lopez Obrador. Mexico would prefer that Pena Nieto sign the deal negotiated under his leadership.

Exactly when USMCA would actually take effect, however, remains very much in doubt. Legislation to make the trade agreement law will have to pass through both the U.S. House and Senate. The ratification process in the U.S. Congress is likely to begin early in 2019 and could take months. In Ottawa, the earliest chance for implementation legislation to be table in Parliament is late January, when the House returns after its year-end break. That bill might also take months to pass.

Sarah Goldfeder, an expert on Canada-U.S. relations at the consulting firm Earnscliffe Strategy Group in Ottawa, said if Democrats in the new House show resistance to passing USMCA quickly, there’s no reason for the Trump administration to be in any rush to bring the matter to Congress. “They won’t put up legislation until they can whip the votes,” Goldfeder predicted in an interview.

Ultimately, though, she said the real pressure to pass the trade agreement depends, not on the partisan stripe of Congress, but on the underlying economic interests of large swaths of the U.S. map. “The rural states, and the rust-belt states, and the southeast states, who all are dependent upon trade for their economies, would all force a discussion based on pragmatism,” Goldfeder said.

While it’s natural that Canadian attention is focused on USMCA—which has been the dominate bilateral issue for more than a year—she said worrying only on the trade pact misses a bigger picture. “All of American domestic policy affects Canada,” she said. The prospect of a much more strained relationship between the White House and Congress raises the spectre of policy paralysis in Washington—with sweeping, unpredictable consequences for Canadian businesses that sell across the border, especially if gridlock is serious enough to cool what has been a hot U.S. economy.

A near-obsessive watching of U.S. political and economic news is bound to prevail in Ottawa for months to come. For instance, Finance Minister Bill Morneau is slated to table his annual fall economic update on Nov. 21, with this year’s edition expected to contain targeted business tax breaks, expressly to counter the competitive edge U.S. companies gained from Trump’s broad tax cuts.

As for Conservative Leader Andrew Scheer, he and his strategists will have to parse the midterm results for signs of how they might adjust Tory strategy. Does the House tipping to the Democrats suggest that adopting elements of Trump’s messaging would be dangerous gamble? Or does the fact that Republicans fared better than many predictions signal that Trump’s strain of populism, perhaps toned down for Canadian voters, would be a good bet?

Even if the midterm results don’t dramatically change the trajectory of USMCA, the politics of Trump’s America seem bound to remain a dominant preoccupation of Canadian politicians as they gear up for next fall’s federal election.