What are we debating when we debate border crossers?

Paul Wells: The Trudeau Liberals are becoming fascinated with the idea that language matters. And in its spat with Ontario this week, they were not entirely convincing. 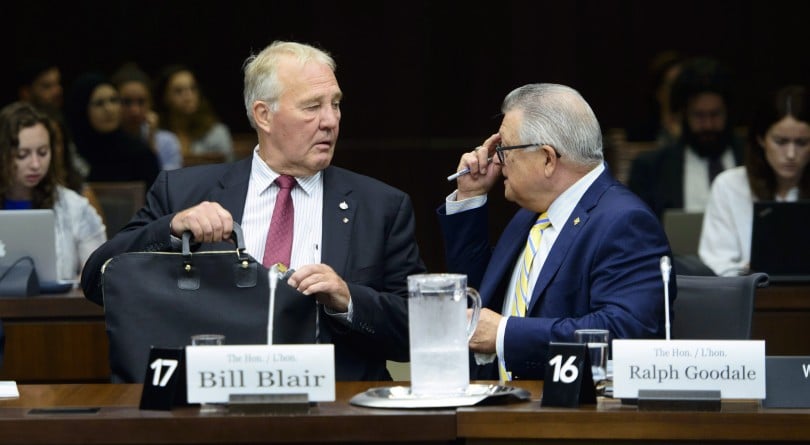 Public Safety and Emergency Preparedness Minister Ralph Goodale and Minister of Border Security and Organized Crime Reduction Bill Blair appear as witnesses at a House of Commons standing committee on immigration in Ottawa on Tuesday, July 24, 2018. (THE CANADIAN PRESS/Sean Kilpatrick)

Tuesday’s meeting of the Commons Committee on Citizenship and Immigration was a handy reminder that on the most divisive issues, politics is often stacked several layers deep.

It’s the dead of summer on Parliament Hill, and nothing’s going on. The main exception is an exceptional meeting of the immigration committee, called at the request of four opposition MPs. The issue at hand is all the people who’ve been walking across the border, mostly in Quebec, Ontario and Manitoba.

The politics began immediately, during a preparatory meeting a week ago, on July 16: Conservative MP Michelle Rempel’s original motion called for the committee to “review the adequacy of the federal government’s response to the impact of increased asylum seekers.” Liberal MP Gary Anandasangaree moved an amendment: Get rid of any consideration of the government’s adequacy, and replace “asylum seekers” with “irregular border crossing.” There was a lot of arguing and some votes—I’m piecing this together from minutes—and in the end, the Liberals mostly won.

Two days later, Justin Trudeau shuffled his cabinet, and the list of ministers who were invited to testify had to be amended. So right away we know this debate contains elements of vocabulary and of jurisdiction—who’s in charge of this file, and how should they talk about it?

When the committee reconvened, on Tuesday morning, the tension was palpable. Basically, if a witness and the MPs interrogating the witness belonged to the same party, all was calm. If witness and MP were from different parties, there was a lot of interrupting. Liberal MPs who were delighted to let Liberal cabinet ministers Ralph Goodale and Bill Blair talk as long as they liked were suddenly very concerned about “my time” when Lisa MacLeod, the new Ontario Conservative minister of Children, Community and Social Services, sat in the same seat a few hours later. And similarly, Rempel and her Conservative colleague Pierre Poilievre were much less worried about their time when a Conservative was in the witness chair. This much is wearyingly familiar to anyone who has watched any committee meeting. It’s human nature.

What was novel when Goodale and Blair testified was that the widespread, and probably temporary, confusion about their respective roles is, for the moment, shared by the ministers. Goodale is the minister of Public Safety and Emergency Preparedness. Blair is the new Minister of Border Security and Organized Crime Reduction. There is also a  Minister of Immigration, Refugees and Citizenship, Ahmed Hussen, not present on Tuesday morning. Which one is responsible for what? Blair, the new guy, took a few questions from Rempel—Does Goodale report to him? “Absolutely not”—before deciding he was in past his briefings and that he couldn’t take any more jurisdictional questions. New ministers get a “mandate letter” from Prime Minister Trudeau outlining their designated tasks. Blair doesn’t have his yet. He doesn’t know for sure what he’s in charge of.

READ MORE: The migrant surge on the border isn’t a crisis, it’s just a fiasco

Neither does Goodale know what he’s no longer in charge of, though he did feel confident designating one question as “squarely in the wheelhouse” of the absent Hussen. Together, the veteran minister, the new minister and the absent minister didn’t combine to offer the committee a lot of new information.

If the feds have three ministers on the border-crossing file, the Ontario government has one, who makes a show of wishing she weren’t: Lisa MacLeod, whose long title is “Minister of Children, Community and Social Services and Minister Responsible for Women’s Issues.” Appearing before a federal committee whose members she knew well, both Conservative and Liberal, MacLeod styled herself the provincial minister “with responsibility for immigration.” Ontario used to have Ministers of Immigration, or sometimes Ministers of Citizenship—the post was created, as far as I can tell, in 1982 under Bill Davis, and was held under various titles continuously ever since, until Doug Ford became the premier last month.

MacLeod is keeping an eye on the border-crossing file, but famously would rather not: she and her premier are demanding that the feds cover all costs of resettling border crossers in Ontario. The feds have offered $11 million, she told the committee. She figures the cost at closer to $200 million, so far, and rising.

Questions from MPs. One of MacLeod’s Liberal interrogators was Sean Fraser, the tall, slim and bearded 34-year-old MP for Central Nova, Peter MacKay’s old riding. Fraser was most concerned about the visiting Ontario minister’s choice of vocabulary: Like all representatives of the Ontario government, she calls the newcomers awaiting judgment on their future “illegal border crossers.”

Such a choice of terminology “could be populist rhetoric and it could dehumanize asylum-seekers,” Fraser told her, solicitously. “I don’t think that you use this language maliciously. As I’ve said I think it’s innocently held.”

Rempel, sitting opposite Fraser on the opposition side of the committee room, jumped in. “Point of order, Mr. Chair.”

Rempel: “I would seek unanimous consent from the committee to table the blues from the March 19 meeting, where the immigration minister from this federal government said that he used the terms [“illegal” and “irregular”] interchangeably,” Rempel said. “Just, it might help my colleague’s comments.”

The “blues” are the unofficial, not-yet-corrected first draft of a transcript of MPs’ remarks. There was some back-and-forth over what Rempel meant to say—Rob Oliphant, the Liberal committee chair, reminded her that by now the blues will have been replaced with proper corrected “minutes”—and, in the end, the Liberals on the committee refused to grant the unanimous consent Rempel was seeking. But her point was made: if it’s improper to call irregular border crossers illegal border crossers, Hussen had no problem with the distinction as recently as March.

Fraser pressed on. “Regardless of what specific word we’re using in this context, the point I’m trying to make is that it’s not asylum-seekers that are crossing our borders that we need to fear. It’s the ideas, and the potential for discrimination that are invading our politics, that I am most concerned about.”

He quoted a Facebook post from one of his constituents back home in Nova Scotia: “I am so sad how the Ontario government is acting against the real Canadian values of openness and welcome by spreading hatred that impacts directly the most vulnerable group of asylum seekers.” Fraser read this Facebook post out loud, while MacLeod listened. “Nobody was born to immigrate but if they are forced to leave their home, let’s show them some kindness. #kindnessmatters.”  He read this out loud, as one does with social-media hashtags: hashtag-kindness-matters.

READ MORE: Twenty-four hours, down on the border

Fraser went back to speaking in his own voice. “My request for you is, when you get back to Queen’s Park, to have a conversation with your colleagues, and I’ll undertake to do the same with mine. That we be careful in our choice of language, because words matter, and it’s causing a real impact for people who work and live in my riding.”

MacLeod drew herself back. She’s been in politics for a while.

“So, I don’t agree with the characterization whatsoever,” she said. “I do look forward to going to New Glasgow next week for my 25-year High School reunion and to give a speech to the Pictou County Chamber of Commerce. The rural values that I grew up on have served me extremely well in the nation’s capital for the past 5 elections, where I have served with former minister Poilievre in Nepean—Carleton, which is one of the most diverse ridings in all of Ontario; which welcomes immigrants from around the world, in particular from China and from India, but has welcomed a number of Syrian refugees.”

“So I really disagree with your characterization,” she told Fraser. “In fact, I think when you do this, you’re actually contributing to more of a negative tone in this debate. This is a very emotional debate for many people. I’m simply here today, as the minister responsible for a number of different former ministries in the province of Ontario. I have a $200 million price tag that I need you guys to pay for.”

“And you would rather have a debate on words. I would rather have a debate on making sure that I can fund my ministry, and the programs that I am responsible for—and that is children and youth; children in care; children in the justice system; children with autism. It is the Ontario Disability Supports; it is Ontario Works; it is women escaping trafficking, women escaping domestic violence, it is a plan to eradicate poverty in the province of Ontario.”

“So that is who I’m standing up for, for all the people in this province, in the province of Ontario, who rely on my ministry, for the services my ministry delivers. And so I am here today indicating that there is a $200 million price tag that your government needs to pick up. … You can have a debate on the dictionary and the thesaurus and I’d be happy to, you know, let you do that. I have a job to do. And I have very vulnerable people who rely on me to do that job.”

You can decide for yourself who had the upper hand. Writing as someone who’s raised concerns similar to Fraser’s in this space, I thought that in the moment, MacLeod wiped the floor with him. The Trudeau Liberals are becoming, as a species, utterly fascinated with the idea that language matters. Often it does. But it’s not the only thing that matters. And when measured against things that matter more, it can be highly unconvincing.

But a debate doesn’t end after a single combative paragraph of prose from a new minister. Ontarians now have a list of things MacLeod says she values highly in her portfolio: children and youth; children in care; children in the justice system; children with autism. Ontario Disability Supports, Ontario Works, women escaping trafficking, women escaping domestic violence, and nothing less than a plan to eradicate poverty in the province of Ontario. Duly noted.

Ontarians may also wonder, or some of them may, why precisely a few thousand people who will be waiting in Ontario to find out whether they can stay have been placed, by the minister who claims responsibility for their fate, in direct opposition to the needs of millions of other Ontarians. Or why even though the province of Ontario is home to half the country’s immigrants, the government of Ontario no longer has a minister of Citizenship and Immigration, for the first time since E.T. was playing in the province’s movie houses.