Politics Insider for Jan. 21: Manitoba's premier is a personified 'bridge,' Canadians are split on the Flight 752 blame game and anyone want a Tesla for $75? 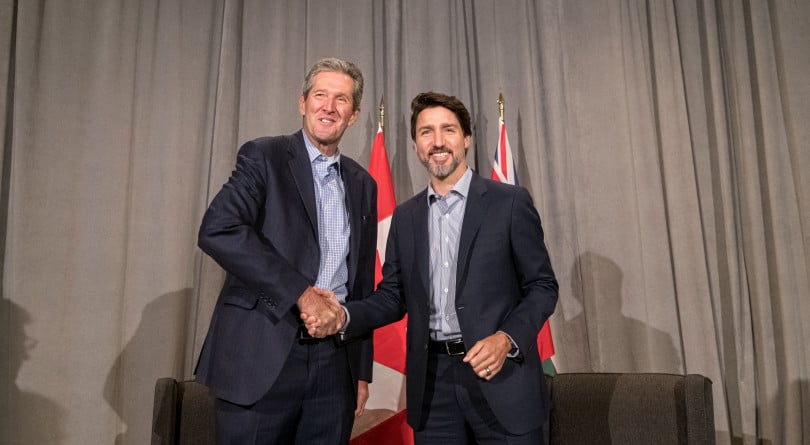 Manitoba Premier Brian Pallister shakes hands with Prime Minister Justin Trudeau before speaking to media during day 2 of the Liberal cabinet retreat at the Fairmont Hotel in Winnipeg on Jan. 20, 2020. (Mike Sudoma/CP)

Is Brian Pallister the hero a divided Canada is looking for? Manitoba’s premier, whose legislative assembly in Winnipeg is a chilly 25-minute walk from the federal Liberal cabinet retreat at the local Fairmont hotel, called his province “the bridge” to a stronger country. Pallister indulged in some give and take with Team Trudeau in town.

The give? A “dialogue” with Ottawa about a new provincial green plan that will, he says, “include a carbon price of some kind.” So that’s a maybe on a carbon tax. The take? Pallister wants the feds to give his province a little respect for taking action on the climate file. Jonathan Wilkinson, the federal environment minister, said politicians must be “forward-looking” on cutting emissions. This proverbial bridge may soon need economic stimulus. (Cabinet did, in fact, bring Canada’s wallet to Winnipeg.)

The first meeting of the special parliamentary committee on Canada-China relations agreed on one thing: Dominic Barton, Canada’s man in Beijing, should come to Ottawa and answer some questions. Mark your calendars for Feb. 7 (at the latest).

They’re on it: Canada’s chief public health officer, Teresa Tam, jumped on the line with reporters to talk about the spread of coronavirus—not to Canada, she emphasized, though three travellers from China were investigated as possibly being infected. Tam’s agency was created in the aftermath of the SARS crisis that Canada, which revealed weaknesses in the country’s outbreak preparedness.

iPolitics reports that one-third of Canadians polled by Mainstreet Research say the Trump administration is to blame for the downing of Flight 752. Half of respondents pointed the finger at the Iranian government. Atlantic voters and Canadians over 65 were likeliest to blame the U.S. president.

Joe Cressy will take parental leave in September, a perfectly ordinary thing for a new dad to do. Except if you know that name, then you know Cressy is a Toronto city councillor. It’ll be a tough gig to do, he says, without the sort of backfill afforded most workplaces. A Sun columnist by the name of Sue-Ann Levy called Cressy a “typical entitled millennial” who should take better advantage of child care.* Cressy’s reply in Maclean’s:

This is an incredibly toxic mindset. Not only does it deny politicians—who, despite some Twitter rhetoric out there, are indeed human—and their children essential bonding time, it acts as a deterrent to anyone interested in running for office and having a family.

Tape made of Liberal red: Yesterday the Tories put out a boilerplate press release on an urgent need to ease the regulatory burden on Canadian businesses. But one stat jumped out from a 2019 Montreal Economic Institute report on cutting red tape: the number of federal regulations as of 2018 was 136,121. Had Conservative staffers done their own sleuthing, they’d see that number actually jumped up to 136,379 in 2019 (which isn’t actually the all-time high for these Liberals).

Federal eBay: It’s never a bad idea to find out what your friendly federal government is selling on GCSurplus, where anyone can bid on the used cars, spare parts and assorted toys and knick-knacks that come into the feds’ possession. Yesterday’s can’t-miss auction was a Tesla Model X selling for $75! Okay, it was a scale model, but still a huge discount. If you happen to have $100,000 sitting around and a hankering for melting 39 tons of used shell casings, our military is happy to oblige. Bids close midday.

CORRECTION, JAN. 24, 2020: An earlier version of this post states that Sun columnist Sue-Ann Levy said Toronto councillor Joe Cressy should accept a smaller paycheque while on parental leave. In fact, Levy wrote no such thing.