What happens when politicians have to grapple with 'survivability'

As Harjit Sajjan faces demands for his resignation, a former Harper PMO insider offers a look inside a political defence

“Is this mess survivable?”

It’s the question no prime minister wants to ask with regard to one of their cabinet ministers. Yet it’s the one being asked inside the Prime Minister’s Office right now regarding Defence Minister Harjit Sajjan and his repeated embellishment of his role as the “architect” of Operation Medusa.

The good news for Sajjan is that the prime minister likes him. How do we know? He still has a job. If Sajjan was a problem minister, the eject button would have been hit quickly, Helena Guergis-style.

But Sajjan shouldn’t let his serial apologies “owning” his “mistake”—or his boss’s initial support—lull him into a false sense of security. His future is still in the balance, and it will be until every public statement he has ever made as a candidate or public official is compared against the record to see if it accords with reality.

Here’s what’s likely to have happened since the report came out last week. Amid the media and opposition’s intense desire for political blood, an expedited internal inquisition would have begun in the bowels of Langevin Block with Sajjan himself and focused on the issue du jour: Operation Medusa.

The objective? Unearth every bit of relevant information. The last thing you want to do is start fighting back only to be upended by something you weren’t told, or didn’t know. I think of Pamela Wallin, whose overall expense totals back and forth from Saskatchewan were in the ballpark of other members of the Senate and House from that part of Canada, but upon closer scrutiny turned out to feature too many long layovers in Toronto. Unfortunately the prime minister had defended the overall total as reasonable by the time the correct level of scrutiny was applied.

Another important goal during the internal grilling is to keep the trust of the minister you’re trying to help. In politics, people on your own side often believe you’re out to get them. This was the never-ending problem with Mike Duffy; when he wasn’t busy blindly emailing half of Ottawa with his theories of persecution, he was actively undermining the very people who were trying to sort him out. It didn’t end well.

Returning to Sajjan: the need for candour in all responses would have been strongly impressed upon the Minister. Garbage into issues management produces a garbage political response. If there is another potential problem out there, the PMO need to be the ones to spot it so any Sajjan backtrack—or exit, if it comes to that—can be managed with a smidgen of decorum. 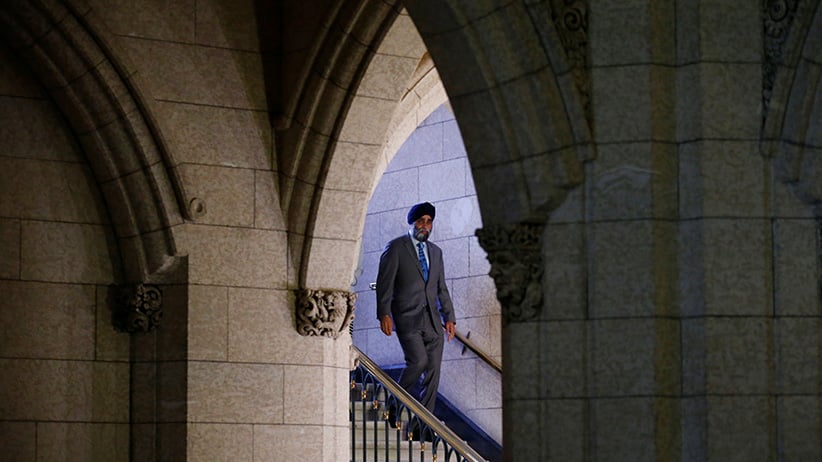 Some of the questions they probably asked: Did Sajjan make this claim any other times (other than the several already identified) either in public or in private? Did he make other similar military embellishments, on the private or public record? Are there fellow soldiers, particularly those still serving, with axes to grind and media contacts at hand? The Department of National Defence is notorious for leaking like a sieve, especially when the opportunity arises to wound a political master.

This initial PMO questioning of Minister Sajjan would have begun the moment it became clear Matthew Fisher of Postmedia was reporting the minister’s lie, and is likely what led to the more detailed statement offered by Sajjan on Facebook over the weekend. It wasn’t so much an apology as it was a prophylactic; the government couldn’t go into a stormy Monday Question Period without some cover.

Whatever was said behind closed doors, though, Sajjan’s answers were clearly good enough to earn the backing of Trudeau, who put his credibility on the line by supporting his embattled minister. This is a point of no return; whatever happens to Sajjan, Trudeau will now wear. That’s why cover was sought elsewhere, with Chief of Defence Staff Jonathan Vance also popping up—surprise, surprise—to say he now considered the matter “closed”.

Having stuck out his neck on Sajjan, the Prime Minister can only hope there isn’t another shoe left to drop on Op Medusa or, frankly, on any other Sajjan file. It’s squeaky bum time.

But the work is hardly over. Newsrooms are likely to be looking into all corners of Sajjan’s life for similar embellishments, and so the internal questioning of Sajjan by the PMO would also have needed to expand into other areas. Have there been any lies about educational achievement? Previous jobs? Taxes? Citizenship applications? Even if there’s no evidence of any, as there is none here, the questions must be asked.

Or, I should say, re-asked. They would have been asked initially during the screening of election candidates and then again for the vetting of Cabinet appointments, but as the Maryam Monsef is-she-or-isn’t-she-Afghani incident showed us, the process is fallible. They must be re-asked in a crisis, with the media frenzy on hand to concentrate the mind.

The opposition parties have duly done their part and called for Sajjan’s resignation, with the Tories labelling the defence minister’s truthiness “stolen valour.” They also smartly rehashed other Sajjan blunders, including his stretching of the truth on Iraq’s views of our CF-18 pull out. NDP leader Tom Mulcair was equally scathing.

The battering has clearly affected Justin Trudeau, who has rejected the calls for Sajjan’s job but was caught venting on the chamber’s microphones about the inquisition. But the prime minister would do well to keep his cool for a little while yet. He might have drawn a line in the sand by supporting Sajjan, but his government doesn’t control all of the variables in this scandal.

That’s why Sajjan will be a rare commodity across the country in coming weeks; any appearances will be tightly scripted and media largely avoided in the hope of starving the story of oxygen. In the meantime, Trudeau can do nothing but point to Sajjan’s apology until his index finger falls off.

It’s a mess, alright. But is it survivable? Let’s see.