What Quebec wants: To be a little closer to Canada

'It’s not time to open the constitutional table,' says the minister heading up Quebec's discussion on its place in Canada 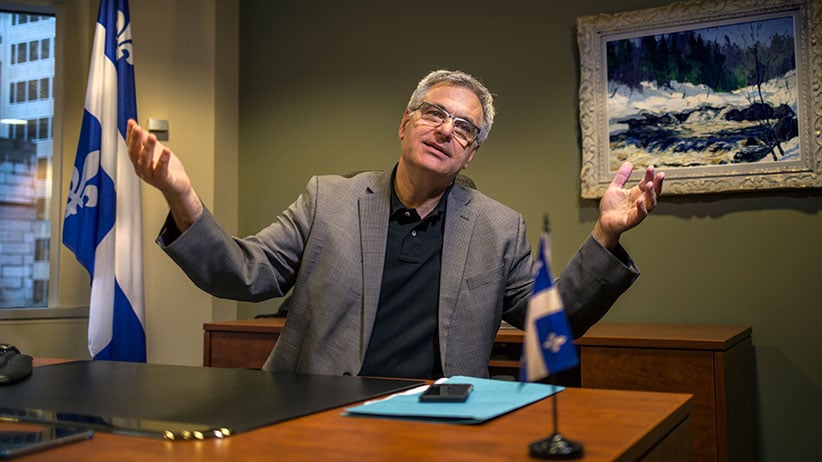 Some fugitive instinct buried in long-dark corners of my pundit brain made me get on a train to Montreal on Monday to interview Quebec’s Minister for Canadian Relations and La Francophonie, Jean-Marc Fournier. The subject, of course, was the discussion paper on Quebec’s place in Canada that Fournier’s boss, Premier Philippe Couillard, released last week. (Here’s a story on the release; here’s the document itself, 192 pages in English.)

The paper itself is an odd duck. Its title is Quebecers, Our Way of Being Canadians, which is more easily comprehensible in French. It’s really long, goes back to long before Confederation, and—one can verify this sort of thing using electronic document searches—mentions the word “constitution” 298 times.

There’s an opening note from Couillard that is studiously anodyne (“We are the sum of everything we have received from our predecessors: the only predominantly French-speaking state in America, our culture and a civil-law based tradition, but also the talents and strengths of all the people who have chosen to settle in Québec.”)

The foreword from Fournier, a Quebec Liberal lifer who has at different points been Quebec’s minister of education and of municipal affairs, contains a bit more grit. “We clearly announce our goal of breaking down the taboo surrounding discussions about our future relations within Canada,” he writes. “We must resume the discussion about the future of the Federation, including its constitutional aspects.”

Upon its release, this was enough to provoke the traditional cries of No Way from some English-Canadian commentators, joined quickly by the traditional pleas for tolerance and flexibility by others. My own thoughts on the matter are complex; don’t much matter; and aren’t worth dumping on you unless the Couillard-Fournier project gets a fair bit further down the runway. Offhand, based on my odd discussion with Fournier, I now doubt it will.

I had asked for an interview with Couillard. It wouldn’t have been the first. I was told Fournier is leading on the file, so I met him at a Quebec government office on Sherbrooke St. in Montreal.

I began by saying old guys like me, who remember the Meech Lake Accord, have very clear memories of constitutional negotiations. Why does Fournier want more of those?

He replied by noting it’s the 150th anniversary of Confederation. “It seems to us very important, as every celebration, to look to the past—where we come from, where are we now, and where do we want to go?” he said. “And so the result is Quebecers, Our Way of Being Canadian. I think it’s a way to say that there’s a strong allegiance to Quebec, but also a sense of belonging to Canada. Something that maybe is not very often said in Quebec to the rest of the country. But I think that’s a point we’ve got to explain a lot. This paper is about where we come from and how we can be closer together. How we can prepare the future together. This is what the paper is talking about.”

All righty then. So the government of Quebec has launched a 192-page document that mentions the constitution 298 times that’s really about getting to know each other more?

“We’ve got a new [interprovincial] trade agreement in Canada in force for two months, or one month,” Fournier said. “It’s a new way of doing things in the country. It’s about that that we’ve got to talk and look, how we can do things together to create jobs. It’s relations. Canadian relations is not just constitution. That is the way to see it in the past. We propose, for the future, to see it another way.”

“One way of saying it is: Stop asking, ‘What does Quebec want,’ and just look at who Quebec is,” he clarified. “And see what we dream for the future. And you might share the same dreams. I’m pretty sure.” Here he chuckled lightly. “So that’s what we are looking for.”

I decided to bounce three political reactions off Fournier to get his reaction. Justin Trudeau first. “You know my position on the constitution,” the Prime Minister said last week when first asked about the Couillard document. “We’re not re-opening the constitution.”

What did Couillard say to that?

“We didn’t ask. So please read the paper. The paper is about how Quebec wants to have more presence in Canada so we can define together a common future. So if the question is, ‘Do you think, Mr. Trudeau, that it’s a good thing that Quebec and the rest of the country should consider trying to define a common future?’ Still no?”

I asked about Brad Wall, who’s the premier of Saskatchewan, and Jason Kenney, who would like to be the premier of Alberta. Both replied to news reports about the Couillard document by saying, If we’re going to discuss the constitution we should also change what Wall called the “terribly flawed” equalization system, which benefits Quebec.

“When you enter into a conversation, you allow everybody to say whatever they want,” Fournier said. “So they can say whatever. But as I was saying, we’re not considering a constitutional negotiation or real discussion now.” So there is no imminent discussion either of Quebec’s Meech Lake conditions or of Wall’s equalization overhaul.

“The constitutional aspect is a  [UPDATE: Fournier’s office says what he actually said was that the constitution is “one dimension” — pw] of all the paper,” Fournier said, growing impatient. “And it comes at a point where we’ll be ready to talk about that. And I’m pretty sure that when we’ve got the first reaction about it it’s because we’re not ready to talk about that. And we all know that.”

Onward. Jean-François Lisée is Quebec’s opposition Parti Québécois leader. His job, of course, is to discover every day that Canada is a disaster. He earned his keep upon the release of the Couillard document by congratulating the Liberals for realizing Canada is broken.

Was Lisée not celebrating an anticipated failure? “I don’t see how we can fail,” Fournier said. “It’s a policy about being closer. So I’m very happy if you think that’s a good thing to be closer to the rest of the country. Mr. Lisée will do politics with it. Of course. It’s normal. He’s got a right to do that. But we were clear: it’s not a question of deadlines, it’s a question of will. We’ve got to develop the will to work together, to know each other, to understand there are different models, like the one we talk about: plurinational federalism. It’s a new concept. We were not talking about that during the years of Meech.”

I’m not sure what to do with all of this. If the minister’s response to a prime minister who doesn’t want talks, and to a premier who wants to add his own agenda items, is to say he has no plans for constitutional talks, then I’m prepared to go back on hold until further notice. If you want to read about plurinational federalism and, well, relations, the Quebec government’s discussion paper is yours to enjoy.