The two main rivals faced off on the topic of social issues. It was one of the most compelling moments of the leaders debate. 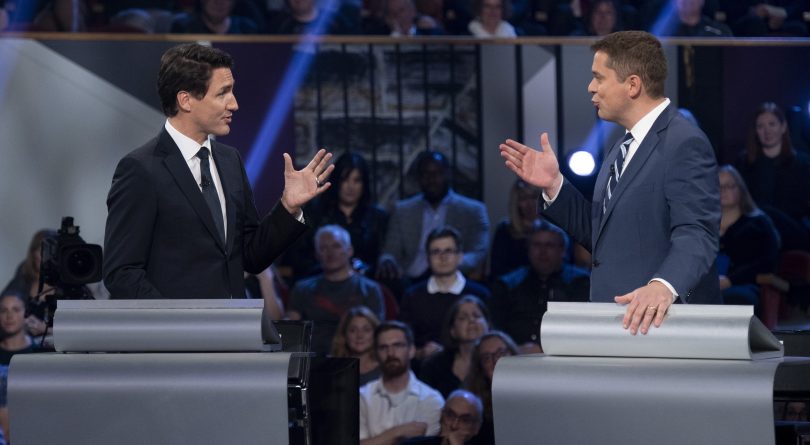 Trudeau and Scheer at the Federal Leaders Debate on Oct. 7, 2019 (Justin Tang/CP)

It is all too fitting for this strobe-lit cosmic bowling evening of an election debate that the most compelling exchange in the segment on affordability and economic insecurity was about social issues, but here we are.

Before we arrived at that point, however, Bloc Québécois Leader Yves-François Blanchet fielded a question from moderator Dawna Friesen about whether he would wean Quebec off equalization payments.

Canada’s “oil provinces” got very wealthy by developing their resources with money from the rest of the country, Blanchet said, and, “today, they are using it as a threat over Quebec,” whose citizens don’t want oil passing through their territory because they rely on clean energy. He proposed a different equalization formula in which climate action over-achiever provinces would benefit and the laggards would pay.

When it was Liberal Leader Justin Trudeau’s turn to debate Blanchet directly, he said equalization isn’t perfect, but it’s a system that stitches the country together in something approximating fairness. “Unfortunately, you, Mr. Blanchet, as a sovereigntist, are always looking for opportunities to create fights between Quebec and the rest of Canada to advance your soveriegntist agenda,” he said sharply.

“We have paid for the development of oil in western Canada, and you make us pay again with this idea of buying a pipeline over there,” Blanchet retorted. Throughout the evening, Blanchet was loose, clever and outright funny at times, even while working uphill linguistically.

Later, in the endless carousel of questions from various sources and the minuscule slices allotted for response, Friesen informed Blanchet that it was his turn to ask a question of any other leader. He emitted a high-pitched “Hmmph!” thinking sound that earned a good laugh from the studio audience, then turned to ask Conservative Leader Andrew Scheer about his apparent inconsistencies in French and English on how he would respond to Quebec’s Bill 21, which bars certain provincial employees from wearing religious symbols.

Their exchange went back and forth for a bit, with Blanchet repeatedly pressing a mutedly testy Scheer. “The Conservative party has always stood for individual human liberty, for fundamental human rights,” he declared. “It was a Conservative prime minister that brought forward the Bill of Rights: the last prime minister from Saskatchewan, John Diefenbaker.”

Here Trudeau—by the luck of the draw in the podium directly to Scheer’s right—saw an opening. “Mr. Scheer, you won’t defend a woman’s right to choose,” he said. “You’ve dismissed LGBT people. You haven’t apologized for your words against LGBT Canadians…will you recognize and apologize for that?”

If you did not record the audio of the debate and listen to it multiple times afterward—which you should not do if that is not your job—it would have been difficult to discern more than shards from the furious crosstalk that followed, but this too was perfectly emblematic of this sliced-and-diced debate format.

This echoes a common refrain of Scheer’s over the last several months, that Trudeau dismisses anyone who disagrees with him on freighted social issues as regressive or intolerant. By this point, he and Trudeau were standing almost literally toe-to-toe behind their podiums, punctuating each of their sentences with emphatic hand gestures.

There wasn’t anything particularly new or illuminating about what they were saying, but in a campaign that has seemed to consist of little more than paint-by-numbers outrage and petty little treats tossed at the electorate, there was something weirdly bracing about watching these two chief adversaries just stand there flinging indictments directly into each other’s faces. Almost certainly, no voters were left in a better decision-making position, but there was a bit of catharsis in it.

“The laws and access on this issue have not changed for 30 years, under Liberal prime ministers, under Conservative prime ministers,” Scheer said, as Trudeau barked over him, “Canadians need to know that their prime minister will be there to defend them, and you have been not unequivocal on defending women’s rights.”

From there, the exchange regressed to the mean of this mean little campaign, descending into back-and-forth accusations about who had blithely signed the nomination papers for a more repellent obscure candidate.

And then, from the far side of the stage, NDP Leader Jagmeet Singh sailed in. “A man has no position in a discussion on a woman’s right to choose,” he said. “Let’s be very clear on that.”

It was the line that earned perhaps the loudest applause and biggest laugh of the entire night.