When Trudeau decided to run for Parliament 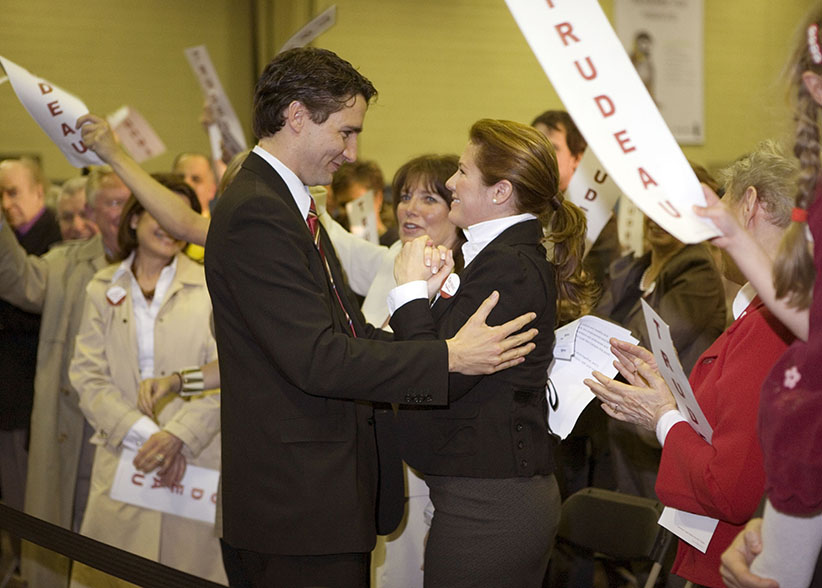 Justin Trudeau and wife at his Liberal nomination meeting in Montreal. April 2007

About a week and a half after Stéphane Dion’s Liberal leadership win, Gerald Butts, right-hand man to Ontario Premier Dalton McGuinty, put a call through to his old friend, Justin Trudeau. The pair had first met at McGill University, studying literature and sparring on the debating team. It was Butts, years later, who had helped write the eulogy Trudeau delivered at his father’s funeral—a performance that triggered widespread talk among Liberals of le fils becoming le dauphin. And it was Butts who, at Queen’s Park, first introduced Trudeau to then-Ontario education minister Gerard Kennedy, the leadership contender Trudeau would endorse, backing him with his first partisan jabs, before following him across the convention-room floor to a triumphant Dion.

Now Butts was calling Trudeau in a bit of a panic. During an impromptu telephone interview, Trudeau had hinted to Maclean’s that he’d made up his mind to run for a seat in the House of Commons in the next general election. Wait a while, he said. He would make an announcement after Christmas. He couldn’t say more. He’d already said too much. Butts, Trudeau’s closest political confidant, knew nothing of it. Indeed, he’d been assuring the curious just days earlier that Trudeau would not run. Now Butts wasn’t so sure. Trudeau’s performance at the convention—glad-handing with abandon, suffering countless ad hoc photo sessions with fawning Liberals—suggested something new. “He crossed the line. He got into the tactical end,” one Liberal says. “He rolled up his sleeves and got into it. And at that point, you either get the bug—or you don’t.”

Approaching his 35th birthday (he was born Christmas Day, 1971), Trudeau looked increasingly buggy—though if he’d made his decision, he’d done so without his usual counsel, Butts included, and was freelancing. Was it true, Butts asked on the phone—would he run? Trudeau said he would. With confirmation of his decision, Maclean’s sent a formal interview request to Trudeau, who still handles his own public relations (and is rumoured to command as much as $25,000 per speaking engagement). “Listen,” Trudeau replied, “I haven’t actually made any decision yet, so I don’t know what you could be running with at this point.” He added: “You guys can do what you like, obviously, but right now there just isn’t anything more than rumours and speculation.”

Butts, tasked with taking control of Trudeau’s slip, followed up with a phone call two hours later. “He doesn’t want a lot of publicity around this until he’s made up his mind,” he said. “Off the record, I think he’s pretty much there.” But Trudeau, Butts said, wanted to discuss the timing of his announcement with Dion to make sure it complemented party strategy. That would take time. “He just doesn’t want a speculative story published before he’s ready,” said Butts.

Trudeau, long the centre of speculation, was finally decided. But he wasn’t finished playing coy. Not yet, anyway. Especially not after the most politically charged month of his life, those weeks before the convention when he’d first stepped from the realm of hazy possibility to carve out something concrete—endorsing Kennedy, taking a chisel to Michael Ignatieff. Trudeau, the political flirt whose nudging and winking had morphed into a bold advance upon the body politic by the time of the convention, was retreating into an old game. He was playing hard to get.

Sure, Trudeau had a lot on his mind. His marriage—to television personality Sophie Grégoire—was just a year and a half old. The couple was thinking of children. And, anyway, the convention had left him feeling “overexposed,” he said. The day after the final ballot delivered the leadership to Dion, Trudeau and Sophie fled Montreal for her ancestral Sainte-Adèle and a family dinner. He was back, up there in the Laurentians, with people he could trust. Down in the world of politics, he said, “The people who love me are just as untrustworthy as the people who hate me—because they don’t know me.” Yet all that love and hate attracted a media circus Trudeau could harness and redirect toward Kennedy, his candidate. “I got a lot of coverage—as I suspected I would,” said Trudeau.

Indeed. During the convention the scion of the great ghost of the Liberal party, Pierre Elliott Trudeau, had, as one newspaper reporter wrote, “haunt[ed] every camera angle that captures the not-so-well-known face of leadership candidate Gerard Kennedy.” Earlier, too, Trudeau had made pronouncements. The debate surrounding Quebec’s status in Canada recalled the small-minded, antiquated notions of the 19th century, he’d said. It was a jab at Ignatieff, who’d introduced the issue. His comments would get more pointed still. In a TV interview, Trudeau, a high school teacher turned McGill graduate student in environmental geography, said of Ignatieff—a man 25 years his senior who’d left a position at Harvard University to become an MP: “He perhaps has intelligence, but he perhaps doesn’t have the necessary wisdom.”

Dion’s camp, meanwhile, watched with growing interest. Trudeau, a boon to any candidate, was still saying he wouldn’t take sides in the race. As head of a Liberal youth task force, he’d already met each candidate. Soon, he appeared to be defending the federalism Dion had propounded a decade before, as Jean Chrétien’s minister of intergovernmental affairs. Dion’s camp arranged for a meeting with him at the Hilton Montréal Aéroport. “It was made clear that any son of Mr. Trudeau would be welcome in our camp,” one Dion insider recalls.

Yet it was not to be. While Trudeau kept talking up both Dion and Kennedy in media appearances, it was to the latter—the man he’d met through Butts—that he gravitated. “I wasn’t planning on supporting anyone,” he told Maclean’s. “I was happy to step back. Then I realized we needed genuine renewal and I had an opportunity to help out that voice of someone I really believed in.” It’s hard to know how Kennedy snagged the prize. Dion had consulted on Stephen Harper’s motion in the House of Commons recognizing Quebecers as forming “a nation within a united Canada,” while Kennedy opposed it. “I suspect the fact that the nation question came up,” Kennedy told Maclean’s—saying the word in French—“might have made him more interested. But that was not a focal point of our discussion.”

Soon, the Kennedy team had written its Trudeau hymn. “My interest in having him involved was as the Justin, not as the Trudeau,” Kennedy told Maclean’s. Navdeep Bains, a young MP who was a key organizer in the Kennedy camp, agrees. “I think, you know, it was Justin who really emerged—not the Trudeau side of it.” Nor was it a view, or a sound bite, that escaped Trudeau himself. Kennedy, he said, “didn’t want the Trudeau on his team—he wanted the Justin.” Yet, as Bains points out, Trudeau “recognizes that he has certain attributes and one of them is name recognition.” Kennedy’s team milked that fame endlessly—shamelessly, even. A convention crowd too staid? Send in the Trudeau. A lukewarm atmosphere? Dispatch the Trudeau. A scrum of photographers snapping at the candidate? Make sure the Trudeau, looking intense, is hovering above Kennedy’s shoulder.

There’s no doubt that, in the final days, Trudeau made substantive contributions to Kennedy’s leadership bid. “He was just a machine in terms of working through delegates and making the case for Gerard,” said one Liberal. Kennedy says his role was that of “consultant,” spanning communications, delegate-outreach and even helping write Kennedy’s speech, arguably the best at the convention. “I think his interest is genuine; I think he did it at some personal cost,” Kennedy says. There’s equally no doubt that Trudeau connects with Liberals. “He’s a person of very considerable enthusiasm and energy,” says convention co-chair and MP Dominic LeBlanc, himself the son of a prominent father, former governor general Roméo LeBlanc. “His energy and his dynamism are infectious—they motivate groups of people, motivate Liberal workers.”

Trudeau also motivated Kennedy’s team to expend considerable energy handling him at the convention. Kennedy’s spokeswoman, Amanda Alvaro, spent much of the convention accompanying not the candidate—but the Trudeau. It was with Alvaro at his side that, stopping by Dion’s headquarters on the night of Paul Martin’s farewell speech, he met a pair of Maclean’s reporters. “Where did you come from?” asked one, engaged in what he thought was just light banter. Trudeau balked—playfully. “I live in Montreal,” he said. No, the reporter pressed—what event did you just arrive from? Trudeau equivocated. “It’s not a trick question,” the other reporter promised. Trudeau demurred. He’d have to get his PR representative involved, he mugged, waving Alvaro to the huddle. “These guys are trying to find out if I was at the Paul Martin thing,” Trudeau said, his finger wagging. Alvaro shook her head. “No,” she said, “Justin Trudeau did not attend the Paul Martin speech.” Her singsong tone suggested someone dismissing an absurdity.

So renewal—his great convention battle cry—doesn’t appear to include rapprochement with Martin, great nemesis of Chrétien, his father’s crony. Such grudges are part of partisan politics. But how will Trudeau, newly emboldened by his debutante’s turn in Montreal, fare in the nitty-gritty of politics, with which he has little experience? Party insiders gossip about possible ridings (“If you’re going to run Justin Trudeau, you goddamn well want to be sure you’re going to win,” said one Liberal organizer). There’s Paul Martin’s LaSalle-Émard homestead; Outremont, soon to be vacated by Jean Lapierre; and relative long shots like Jeanne-Le Ber (a once-hearty Liberal constituency in west Montreal, since lost to the Bloc) and even Vancouver-Kingsway, seat of Liberal-turned-Conservative cabinet minister David Emerson.

And what will Trudeau, once he arrives in that workaday world of Parliament’s creaky elevators and oaky, rabbit-warren offices, struggle to secure for Canadians? On the telephone, riffing on a well-rehearsed refrain, he speaks of renewal, of environmental destruction, of our “wanton consumerism,” of “re-evaluating the way we run our civilizations.” It’s an exciting message, delivered, like all of his messages, with enthusiasm and charm, even if it’s impossible to tell what it means. Trudeau, a man who cannot keep his mouth shut, is freelancing again. What are his political goals? He can’t say. He’s already said too much.