Who belongs in the party of Maxime Bernier?

Stephen Maher: Bernier is unlikely to lead a party that seeks to govern, but many conservatives will find his ideas and his sales pitch refreshing 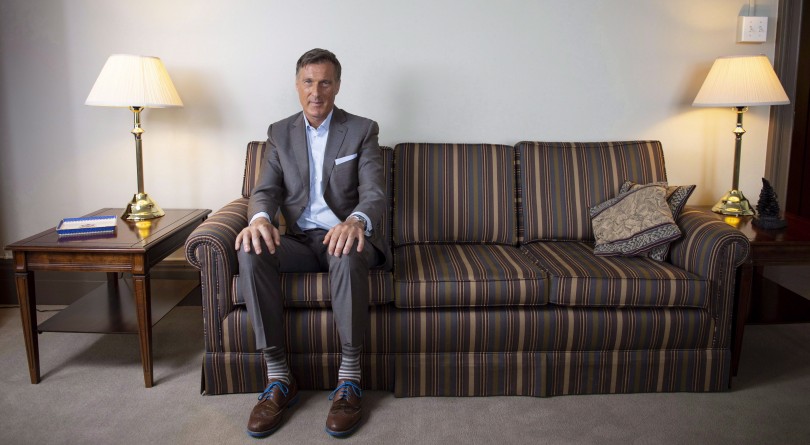 Conservative MP Maxime Bernier is photographed in his office on Parliament Hill in Ottawa on Wednesday, Aug. 1, 2018. (Justin Tang/CP)

You have to hand it to Maxime Bernier.

I am skeptical as to how many seats his new party will ever win outside of his own ancestral fiedom in the Beauce, but when he took a blowtorch to the Conservative Party on Thursday, he did so with intellectually consistent arguments, presented vigorously, and there are reasons to think he will find a constituency for his message.

He was certainly successful in what seems to have been his primary goal: severely handicapping the leadership of Andrew Scheer, whose job it was to keep Max in the tent.

As Rachel Curran, former policy director to Stephen Harper, tweeted while Bernier was speaking: “I hope Justin Trudeau and his cabinet colleagues are breaking out the champagne in Nanaimo this morning. Congratulations to @gmbutts & co. who have secured an easy win in 2019 despite a mostly terrible summer.”

Scheer tacitly acknowledged the same grim reality in his news conference when he said that Bernier “has decided today to help Justin Trudeau.”

With a weak NDP, it was not going to be easy for the Conservatives to win the suburban ridings they need to form a government in the 2019 election, no matter how many colourful dhotis Trudeau wears.

If Bernier actually manages to field candidates across Canada, and bleed off votes from the Conservatives, it will be impossible for Scheer to win the election.

And Bernier looks like he intends to continue to scorch the party, which he denounced as “too intellectually and morally corrupt to be reformed.”

The problem for Scheer is that Bernier’s critique—that the party is cooking up its policy based on polls and focus groups rather than core principles—is true.

“I’m very different than other politicians,” Bernier said. “I want to do politics differently,”

That also seems to be true.

Bernier is, I think, too ideological to effectively lead a party that seeks to govern.

It would be hard to run against supply management when farmers are key voters in the rural ridings that conservatives need to have in their back pocket on the day the next election starts.

And Bernier’s critique of multiculturalism is likely to worry the ethnically diverse voters in the suburban ridings where the Tories need to be campaigning at the end of the election.

It sounds good to attack corporate welfare, but how many voters work for enterprises that rely on it?

The equalization system that Bernier opposes is what allows poor provinces to run hospitals and schools as good as the ones in rich provinces, which voters in the poor provinces tend to like.

But the problem for Scheer is that most movement Conservatives agree with Bernier about these issues, and it is refreshing for them to hear someone articulating their actual beliefs, rather than what Bernier called “a bunch of platitudes that don’t offend anybody, but also don’t mean anything and don’t motivate anyone.”

And Bernier looked pretty good in his news conference, because he believes what he is saying. He fielded the questions from a skeptical press corps without breaking a sweat, repeatedly sticking his knife in Scheer with poise.

Scheer, whose prospects of ever winning power were greatly diminished by Bernier’s assured and calm performance, looked flat-footed in comparison in his news conference in Halifax, where Conservatives across the country are assembled for what must suddenly seem like a confusing and morale-sapping gathering.

Scheer said that Bernier “traded an opportunity to influence policy in government for his own personal ambition” and complained that Bernier had failed to be a team player.

Conservatives in Parliament will rally round Scheer, but they will also inevitably wonder if he could have worked a little harder to keep Bernier in the tent, and if Scheer starts to look like he can’t win, it will get harder for him to convince others to bend to his will.

It reminds me of the challenge that Harper faced in 2005, when Belinda Stronach crossed to the Liberals. That came as a bitter blow to Harper but Conservatives ultimately concluded it was a blessing in disguise, since it gave them time they needed to beat the Liberals.

Bernier’s departure is certainly not as devastating as the day in 1988 that Lucien Bouchard abandoned Brian Mulroney, because Bernier is not as crucial an electoral actor as Bouchard was.

Bernier was never Harper’s Quebec lieutenant. In their razor-close leadership contest, Scheer beat Bernier in ridings across Quebec, including Bernier’s home riding, largely because of the support of dairy farmers who do not want to lose their money-printing licences.

Bernier’s libertarianism doesn’t have a natural constituency in left-leaning Montreal and he has never talked much about the immigration and language issues that motivate the rural nationalists in Coalition Avenir Québec, which looks poised to win the provincial election.

But when Bernier started tweeting last week about multiculturalism policy, the nationalist Journal de Montreal started paying attention. It will likely now give him the kind of coverage that he can use to organize in Quebec.

He can likely also count on support from anti-Muslim social media mobs in other parts of Canada, although he will be have to walk on a knife’s edge to keep their interest without looking like a bigot.

Outside of Quebec, where some nationalists see it as a threat to a besieged culture, multiculturalism is not a Liberal policy, but a natural Canadian consensus position, advocated as forcefully by John Diefenbaker and Jason Kenney as Pierre or Justin Trudeau.

But if Bernier is articulating an alternative, it will put pressure on Scheer’s Conservatives to stay in the debate. Scheer, looking desperate, highlighted his party’s immigration issues in his response to Bernier.

Populists around the world are pushing once-forbidden issues into the mainstream, disrupting seemingly stable party systems with new movements.

There is no reason to think that Mad Max can’t do the same thing here.