Who is Justin Trudeau meeting with? 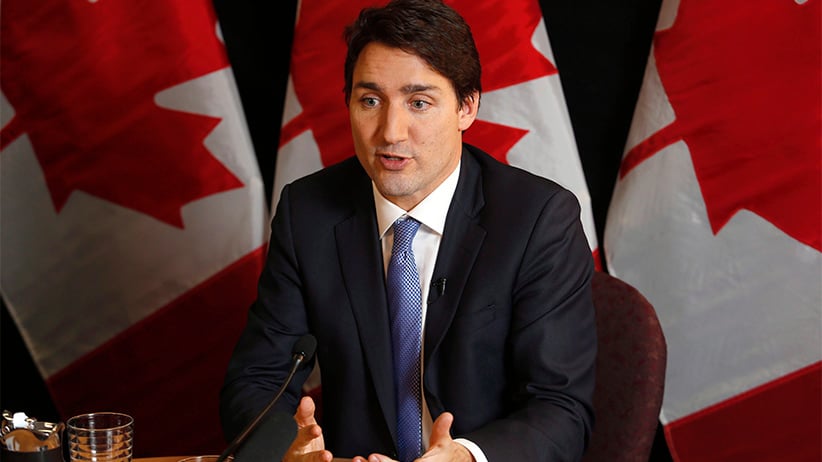 Prime Minister Justin Trudeau speaks with reporters during an interview with The Canadian Press in Ottawa on Wednesday, December 16, 2015. Patrick Doyle/CP

Within days of taking office, Canada’s new prime minister met with 13 lobby groups who wanted government action on everything from cloud computing to overseas business development.

Filings from October through December give an indication of which interests Justin Trudeau and his top advisors considered during his first months as prime minister.

The day after the election, on October 20, Trudeau communicated with a Vaudreuil-Dorion, Que. container company, Conteneurs Experts S.D.

Conteneurs Experts S.D. is seeking funds to develop high-speed mobile cloud computing centres, according to their filing with the federal lobbyists’ registry.

The container company also communicated with Trudeau and members of his cabinet on November 8 and November 13.

Trudeau communicated with nine lobby groups in November, according to filings.

Trudeau and his senior foreign affairs advisor Roland Paris spoke with representatives of the Canadian Chamber of Commerce on November 14. The Chamber spoke to Trudeau on trade issues on November 18. His chief of staff, Katie Telford, and his Minister of International Trade, Chrystia Freeland, were also in on that conversation.

On the same day, Scotiabank lobbyists also spoke to the Prime Minister, Telford and Freeland on international trade and financial issues, according to their filing.

The Hospital for Sick Kids chatted with Trudeau, Health Minister Jane Philpott, Finance Minister Bill Morneau, and Minster of Science Kirsty Duncan on November 20. Also on the lobbyist list were Engineers Without Borders, Canadian Museums Association, and the International Union of Operating Engineers.

The Prime Minister’s Office is now releasing Justin Trudeau’s daily itinerary to the public but the gesture of transparency is so far lacking in detail.

For two days in a row, the daily emails to the press have revealed that Trudeau is in Ottawa holding “private meetings.”

Andrée-Lyne Hallé, Trudeau’s press secretary, says that the Prime Minister’s meetings will not always be made public.

“Consulting on a specific issue needs to remain private for different reasons,” she said. “Some meetings with large groups will be disclosed.”

U.S. Secretary of State John Kerry’s public itineraries are very detailed, including names and titles of people he meets. Ontario Premier Kathleen Wynne’s office also sends out a daily email to press with her itinerary.

With few details in the prime minister’s daily itinerary advisories, the question remains: Who is Prime Minister Trudeau meeting in his “private meetings?”

In the early days of his prime ministership, at least 13 times the answer was lobbyists.