Who's afraid of a coalition?

The Tories should be. Why the party isn't as ready to raise the spectre of an NDP-Liberal alliance as in past elections. 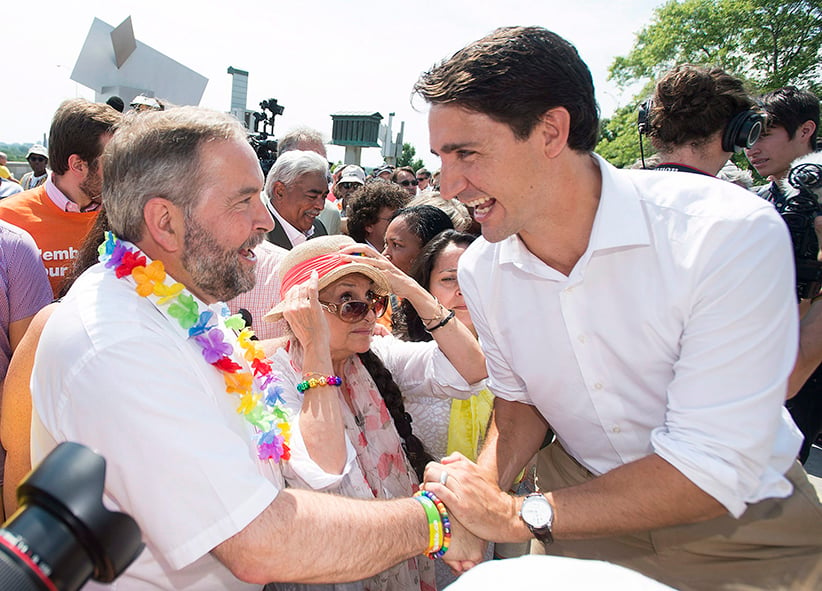 They don’t agree on much, but on the question of who will win the next election, the NDP and Liberals are unanimous: the winner will be the party with the best elixir to cure a nation sickened by Stephen Harper’s decade of wretchedness. NDP Leader Tom Mulcair, ad nauseam: “It’s clear that Stephen Harper’s plan just isn’t working.” Liberal Leader Justin Trudeau, the other day: “Stephen Harper’s plan is not working for Canadians in the middle class, and those working hard to join it.”

Like their rhetoric, their respective plans aren’t dissimilar—and at least as progressive, as Emmett Macfarlane noted in the Ottawa Citizen recently. Yet implicit in each is the apparently bedrock notion that these elixirs shan’t ever mix. Come October, the anti-Harper vote is either Dipper orange or Grit red. A coalition, as Trudeau put it last month, “is out of the question.” If you prefer your denials more bullish and verbose, here’s Mulcair in 2012: “The no is categorical, absolute, irrefutable and non-negotiable. It’s no. End of story. Full stop.”

These are the sounds of fear and ego, which only grow louder whenever an election rolls around. Fear, because the Harper government successfully exploited the idea of a coalition in 2008, raising the spectre of a Liberal-led coalition supported by socialists and separatists.

The Conservatives used an identical strategy in 2011, labelling the opposition Liberals, led by Michael Ignatieff, as the “Ignatieff coalition.” As in, “Harper Conservatives vow never to introduce Ignatieff Coalition’s iPod tax,” as one Conservative attack line went. So, not only are the Liberals willing to open the door to socialists and separatists, they’ll tax your iPod in the process.

Comically absurd, sure, yet the strategy continues to benefit the Conservatives to this day. The NDP has torqued to the centre under Mulcair’s leadership, while the Liberals have as of late staked out policy—taxing the proverbial one per cent, for instance—normally associated with more lefty extremes. The parties are far more similar than in past elections, yet remain separate entities, and Conservatives themselves couldn’t be happier. “In Ontario, we need a viable NDP,” Conservative MP Erin O’Toole said last December. His reasoning is bone-simple: a surging NDP will serve as a damper on that province’s Liberal support, buoyed as it is of late by Trudeau’s gleeful optimism and fine cheekbones.

In order to win, the Conservatives simply need to batten down, secure the base and tread lightly until October. There is a singular reason why Harper’s handlers have clamped down even more on press, limiting access to Conservative functions to card-carrying Conservatives, and why Harper himself speaks frequently about the evils of Islamic terrorism and illicit drugs. Our Prime Minister doesn’t need to proselytize beyond his own base, because his opposition is divided into two warring partisan camps.

Yet it is telling how the Conservatives aren’t nearly as ready to raise the spectre of a coalition this time around. The party has attacked both the NDP and Liberal party for being soft on terror, hard on the middle class and bent on taxing Netflix (iPods are so 2011), yet there is hardly a mention of a coalition. Of course, there’s a lot of campaign left, but it’s worth remembering that in 2011, the “Ignatieff coalition” line was trotted out in earnest after the writ was dropped, and remained a staple thoughout the campaign.

For the Conservatives, there is no real sovereignist threat to exploit this time around. But there’s another, more crucial, difference: the electorate is more open to a coaltion today than in 2011. That year, according to a EKOS Research poll, 43 per cent of Canadians were in favour of a coalition. Today, that number is 20 percentage points higher, according to Ipsos. While the usual caveats apply, it’s at least an indication why we haven’t yet seen Mulcair and Trudeau depicted as a two-headed hydra, ready to cripple our economy and give our children drugs. (They will, however, tax your Netflix account. Old habits die hard.)

The holdup isn’t the electorate—it’s the individual and institutional egos within the NDP and the Liberal party. Mention the idea of a coalition to your average Liberal or NDP hack, as I have, and you’ll get reams of spiel about insurmountably opposed party doctrines and the like. Also, Mulcair is rabid. Trudeau is stupid. Oh, and did we mention the Clarity Act?

Yet it’s difficult to see how these rigid egos won’t ultimately bend to electoral will. As it stands, we have three parties each commanding roughly a third of the pie. This benefits exactly one party—the one in power. Rhetoric aside, the brighter NDP and Liberal bulbs must realize what the non-partisan hoi polloi realized long ago: a coalition isn’t out of the question. In fact, it’s probably what most of the country wants.