Why banishing homegrown terrorists could backfire

The RCMP is scrambling to stop would-be terrorists from travelling overseas. Why do the Tories now want to do the opposite? 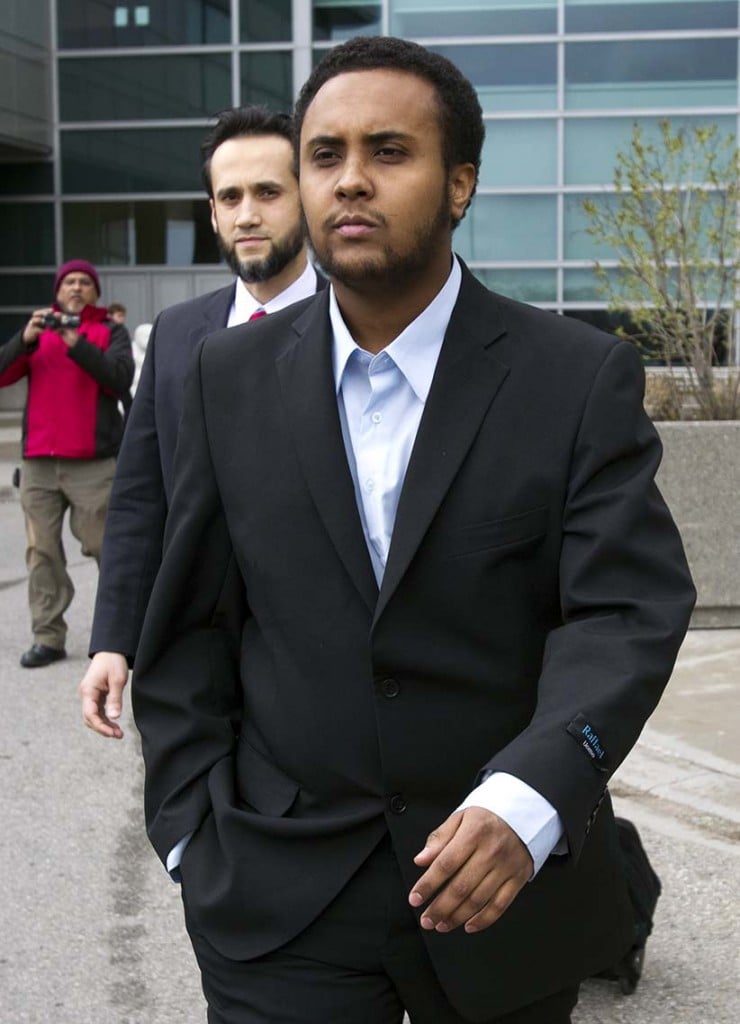 Mohamed Hersi arrived in Canada when he was five years old, a refugee of Somalia’s brutal civil war. Granted asylum, he became a citizen in 2000. Eleven years later, at age 25, he was arrested in the departure lounge of Toronto’s Pearson International Airport, mere minutes before boarding a plane to Cairo. A private security guard, Hersi insisted he was flying to Egypt to study Arabic for a few months. The RCMP had a different theory: that he was on his way to join Al-Shabab, al-Qaeda’s murderous affiliate in Somalia.

A jury ultimately agreed with the Mounties’ version of events, stamping Hersi with the dubious distinction of  being the first-ever Canadian convicted of trying to join a terrorist organization overseas. The presiding judge slapped him with a 10-year sentence in July 2014—a stern warning to other aspiring “terror tourists”—and the RCMP praised the punishment, saying such wannabe foreign fighters pose “a threat not only to the international community, but to Canada and its allies as well.”

In other words, Canada has a moral and legal responsibility to keep extremists like Hersi from reaching the front lines of jihad. It is why authorities have revoked the passports of numerous like-minded suspects hoping to join Islamic State militants in Iraq and Syria. And it’s why, at last count, the Mounties are working on more than 60 criminal investigations targeting 90 so-called “high-risk travellers.”

Yet one year after Hersi was found guilty, the Harper government is touting the opposite approach: banishing homegrown terrorists by revoking their Canadian citizenship (providing they are dual nationals). Empowered by recently enacted legislation, Bill C-24, Ottawa has informed at least 10 convicted terrorists that their citizenship could be stripped, paving the way for their eventual deportations. One—“Toronto 18” ringleader Zakaria Amara, imprisoned for plotting a trio of truck-bomb attacks in 2006—has already lost his status.

The new law has become an unexpectedly pivotal issue in the election campaign, with critics arguing, among other things, that it creates two-tiered citizenship by targeting only dual nationals and not the vast majority of Canadians. Both the Liberals and the NDP have vowed to scrap the legislation, while the Tories remain adamant it’s a valid, effective tool in the fight against terrorism.

But is it? Put aside the larger legal issue—whether C-24 violates the Charter, a question now before the Federal Court—and consider the practical effect. Is exiling a man like Zakaria Amara, a confessed radical bent on mass murder, sound security policy? Does Canada not have an obligation to monitor his movements for the rest of his life, not dump him in his birth country (Jordan) and hope he doesn’t pick up where he left off?

“From a strictly security perspective, it is idiotic,” says Aisha Ahmad, a University of Toronto political science professor who studies Islamist extremism. “Anyone who thinks deporting a convicted terrorist to a war zone will make them safer here in Canada just doesn’t understand how modern global extremists operate. The hard fact is that extremist networks establish themselves in conflict zones where there is weak rule of law, and then use those areas to create global mayhem. It is a top security priority to prevent terrorists from reaching these safe zones. A deportation strategy would facilitate terrorist recruitment and create a more dangerous blowback effect that would put Canada and its allies at extreme risk.” 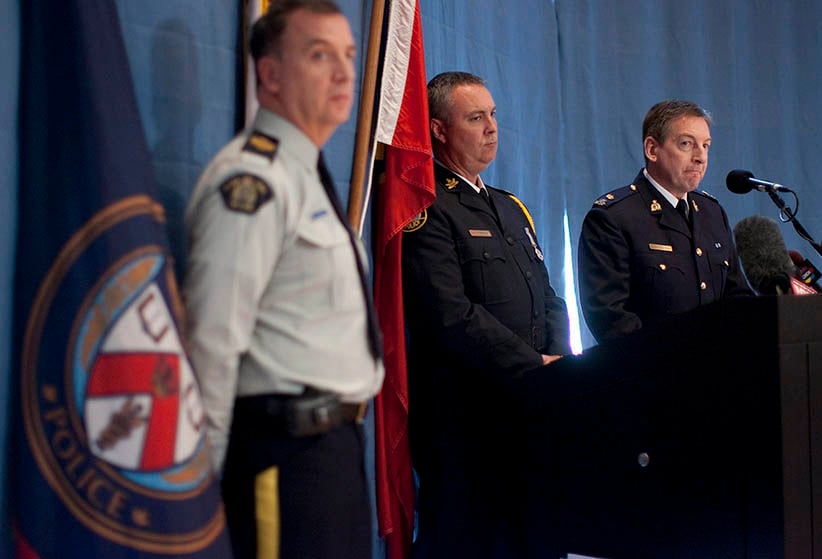 Inspector Keith Finn (right) of the RCMP’s Integrated National Security Enforcement Team (INSET) stands with Superintendent Tom Fitzgerald (centre) of the Toronto Police Service during a press conference in Toronto on Thursday March 30, 2011 relating to the arrest of Mohamed Hersi. The 25-year-old Hersi was arrested on Tuesday night just as he was about to board a plane to Cairo, Egypt with the police claiming he was eventually destined for Somalia to allegedly join Al-Shabaab and participate in their terrorist activities. (Chris Young/CP)

In the case of Mohamed Hersi, imagine the irony. Now appealing his conviction, Hersi is not among the first batch of terrorists being targeted for citizenship revocation. But his lawyer, Paul Slansky, says a federal official has informally told him that his client could be next. “Hersi was charged with planning to go to Somalia and join Al-Shabab, and he denied it,” Slansky says. “If it’s true that’s what he wanted to do—and it’s true that he’s a rabid terrorist—then you would be deporting him to do exactly the thing you said was criminal for him to do himself. It makes no sense.”

The policy is especially confounding because the government has put so much effort and resources into grounding Canadian suspects before they become foreign fighters, says Craig Forcese, a law professor at the University of Ottawa. “You’re taking a person with demonstrable violent propensities, based on their convictions in Canada, and you’re going to set them loose in a particularly vulnerable environment,” he says. “Which begs the question: Is the Canadian taxpayer not just paying their plane ticket to engage in the terrorist fight again?”

Few understand the intricacies of anti-terrorism better than Ray Boisvert, a former director-general of counterterrorism at Canada’s spy agency, the Canadian Security Intelligence Service (CSIS). He agrees that there is “an underlying flaw” to the Tories’ new approach. “In terms of being counterproductive and a detriment to enhancing our overall security, individuals pushed out become very likely deep threats at some point down the road,” says Boisvert, now the president of I-Sec Integrated Strategies (ISECIS). “There is a better than average chance that the individual will turn against Canada, Canadians in the region and our global interest. Talk about fertile recruiting for terrorist organizations or nation states with interests that are inimical to our own—and involving persons of unique value, such as specifically rich knowledge of who we are, how we live and where we would be vulnerable.”

Canada is certainly not the first country to begin stripping citizenship from terrorists. Although the United States does not, allies such as Germany, France, Australia and the Netherlands have introduced similar legislation. Britain has gone a step further, revoking citizenship from people who are only British nationals, leaving them effectively stateless. (The Harper government says Canada’s law targets just dual nationals because a United Nations treaty prohibits the feds from rendering anyone stateless.)

Forcese wonders what will happen if a convicted terrorist holds citizenship in two Western states. “If you have a Canadian-U.K. national, there could be a race to the bottom as to who revokes their nationality first,” he says. “This is all very theoretical, but you can imagine how awkward it will get very quickly because of the ‘not-in-my-backyard’ aspect of this law.”

Awkward—and potentially expensive. Assuming the law is upheld as constitutional, the government would likely still be in for a lengthy legal battle on the deportation front, similar to the one that continues to be waged on the issue of security certificates (a tool that allows the government to arrest non-citizens suspected of terrorist ties and jail them until their removal). To date, not a single person detained on a security certificate has been deported. “The decade-long debacle over security certificates is sufficient enough evidence to make us think twice about spending tens of millions of dollars for no outcome,” Boisvert says. “They won’t be going anywhere.”

Even if the government does eventually receive a court-approved green light to deport someone like Zakaria Amara, Ahmad isn’t convinced Ottawa would actually put him on an airplane. “It’s so stupid that I think when push came to shove, the government couldn’t do it,” she says. “Anybody who thought twice about the implications of such a policy would realize that the intent of it isn’t actually to make Canada safer. The point of it is to score cheap political points.”