Why dismantling the Indian Act will be nearly impossible

Opinion: And it might not be much of a solution to the issues that plague "Indians" in Canada, anyway 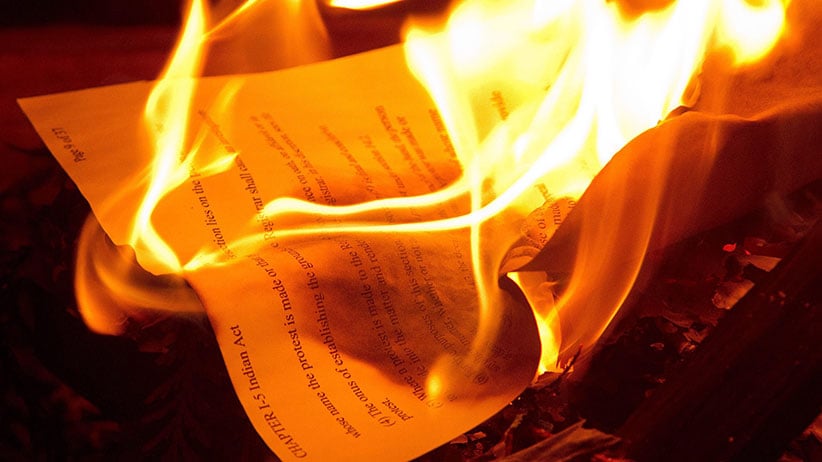 Members of the Huu-ay-aht First Nation burn a copy of the Indian Act. (Darryl Dyck/CP)

Will Canada ever be post-Indian Act? Not likely. If it does happen, it won’t be anytime soon. It took Canada 150 years to dig itself into this Act and it may take just as long to dig ourselves out.

Before we look at what would be necessary to eliminate the Indian Act, we need to understand just what it is and why it was created. “Indian” is the legal designation given to the people who are controlled by the Indian Act. The word and all it implies is one of the things that would be eliminated in a post-Indian Act Canada. In reality, of course, Indian in this context is not a cultural term of identification. It’s a basket that includes hundreds of thousands of Indigenous individuals and collectives the federal government has chosen to designate as Indians. The Act was created to enable the government to control these people, to stop their mobility and eventually to eliminate them as “Indians.”

In order to accomplish this goal the government needed to know where these Indigenous people were and how many there were. To figure out how many people it would be controlling, the government established a registry under the Indian Act. Reserves were created to control their mobility. Along with mobility, control over individual lives, band governance and reserve lands were all accomplished through the Indian Act. Over the decades controls tightened, restricting the people governed by the Indian Act in every way. If you wanted to go to university, join the army, become a priest, marry a non-Indian or vote, your Indian status was removed. Residential schools were the tool used to erase Indigenous cultures. If valuable resources were found on reserve lands, the reserve would be moved, always to poorer lands. If Canada could not move the reserve, it took the money from the resources on reserve.

For over a hundred years Canada’s Indian strategy was a perpetual search for a permanent solution to the “Indian problem.” Extinguishment was the policy; extinguishment of the people, their rights and land title. That’s how it began and that’s how it carried on. To some extent it continues to this day. While we don’t actively try to extinguish people these days, government policies are still complicit in erasing Indigenous rights and title.

So what do we really mean when we talk about a post-Indian Act Canada? If we mean eliminating the controls over Indians and assisting them to develop their potential, then it is a laudable goal. This seems to be what is motivating the federal government to talk about getting out from under the Indian Act. So why am I skeptical? It’s true, as Stó:lō Chief Terry Horne says, “the Indian Act sucks,” but should its removal really be the goal? It seems to me that we are putting our focus on the tool, not on the job to be accomplished.

But dismantling the Act is the stated goal of this government so let’s look at the effect this would have on the registry first. When we speak of a post-Indian Act Canada, do we mean the registry will be eliminated?  That all 637,660 Indians in Canada will no longer be considered “Indians”?  Many people are very attached to their Indian status. In fact, there are many court cases where people have and continue to overcome enormous obstacles in order to become registered. These people see value in being Indians and it is questionable whether they would want to have that status eliminated. For many off-reserve Indians (more than half of the Indians in Canada), status is the only thing they have to prove their First Nations identity. They receive some additional benefits because they are on the registry but the benefits are not provided pursuant to the Indian Act and could be eliminated at any time.

But post-Indian Act Canada won’t just mean abolishing the registry or the designation of “Indians” as defined by the Act. It will be much more complicated than that. There are two possible scenarios (the first being more likely); Give Indians on reserves more autonomy in the form of self-government and get Ottawa out of the business of overseeing reserve governments.

Seems simple, doesn’t it? But it won’t work. Why? Because the reserves are what the Cree call iskonikan, or leftovers. Getting out of the Indian Act but leaving people to live on the leftovers will solve nothing. They will not be under the purview of Ottawa, but their small land bases will not enable them to change their basic living conditions, poverty or economic problems. Under this scenario reserves in a post-Indian Act Canada would look much the same as today. The poor reserves in isolated parts of the country will continue to struggle and reserves in more geographically fortunate areas will continue to flourish. Some would be able to take it and thrive. Most would not. Unless the government provided significant transfer payments to struggling reserves, we would be setting them up for failure. This is not the post-Indian Act Canada we want to see.

It is highly unlikely that these fundamental changes will occur anytime soon due to multiple hurdles to overcome. The most basic one is that the majority of Canadians would not likely agree to share ownership and decision-making about lands and resources with Indigenous people. Canadians like the idea of reconciling with and supporting Indigenous people, but they firmly believe in their ownership of the land and resources and government having all decision-making powers.  This is the colonial stance. It is much like the Americans who were adamant about keeping the Panama Canal. Senator Hayakawa famously said, “It’s ours, we stole it fair and square.” Of course there was nothing fair or square about how Canada obtained the lands and resources and political power from Indigenous people, but I doubt Canadians will agree to give back what they have taken, Indian Act or no.

Another hurdle is the age-old provincial versus federal responsibility problem. Ottawa has jurisdiction over Indigenous people but the provinces have jurisdiction over lands and resources. So Ottawa can dismantle the Indian Act, but it cannot order the provinces to share land and resources ownership, decision-making or benefits. Getting Ottawa to remove its control of Indigenous people via the Indian Act will not solve this problem.  While some provincial governments have indicated they are ready to inch forward somewhat on sharing a few benefits, none are likely going to redistribute lands, resources and power on the necessary scale.

MORE: How a new kind of resolution process can support reconciliation

Another obstacle is the education, health and socioeconomic gap between people living under the Indian Act and other Canadians. That gap needs serious attention but moving out from under the Indian Act will not close it. Nor will it provide any tools to move forward on these issues.

Despite my skepticism about Canada entering into a post-Indian Act world anytime soon, there are broader benefits to this discussion. It encourages us to imagine a Canada where Indigenous people are not a “problem” to be solved.  We can begin to envision a better country and then begin a serious conversation about how to do that. It may play a part, but this journey towards an improved Canada would likely not start or end with abolishing the Indian Act.

MORE ABOUT THE INDIAN ACT: