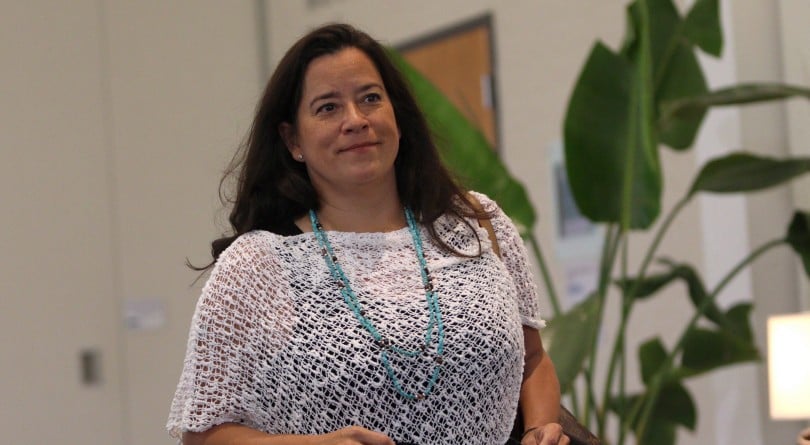 Wilson-Raybould arrives at the Vancouver Island Conference Centre during day two of the Liberal cabinet retreat in Nanaimo, B.C., on Wednesday, Aug. 22, 2018. (THE CANADIAN PRESS/Chad Hipolito)

Many questions were raised by The Globe and Mail’s story this week about allegations from unnamed sources that Jody Wilson-Raybould—back when she was federal justice minister and attorney general—was pressured by Prime Minister’s Office officials in a criminal case involving the engineering company SNC-Lavalin.

But Wilson-Raybould, who is now veterans’ affairs minister, says she can’t answer any of those questions. Maclean’s spoke with University of British Columbia law professor Andrew Flavelle Martin, an expert on legal ethics, about the obligations and conventions that apply.

Q: Former attorney general Wilson Raybould says she can’t talk about the SNC-Lavalin situation because she’s bound by solicitor-client privilege. Is that right?

A: That’s correct. Solicitor-client privilege belongs to the client, and so it’s not for the lawyer to waive it, even if you were the attorney general and minister of justice. There is some uncertainty, when you’re the government, about who can waive the privilege.

Q: Who do you think can waive it on behalf of the government?

A: The short answer in the Governor in Council, or the cabinet, and for practical purposes probably the Prime Minister. So, the Prime Minister or cabinet, depending on who you ask, would be free to let her answer those questions.

Q: I’ve heard there’s a separate concept of lawyer confidentiality. Is that different from solicitor-client privilege?

A: They get fudged together. Basically, confidentiality applies to anything a lawyer learns in the case of the lawyer-client relationship, even if it wouldn’t be privileged. Solicitor-client privilege only applies to communications between the lawyer and client for the purposes of legal advice.

Q: If the Prime Minister’s Office tried to order Wilson-Raybould, when she was attorney general, on what to do about SNC-Lavalin, how should she have responded?

A: If these allegations are true—and I have no idea if they are or not—there’s a very good argument the attorney general and minister of justice should have resigned when they happened. There’s some disagreement in the literature about when the attorney general should resign. The one thing pretty much everyone agrees on is the Prime Minister and cabinet can’t interfere in decision-making in a criminal case.

Q: Why should she resign if somebody else acted improperly? Shouldn’t they resign?

A: That’s a separate question, whether they should or not. When there’s been such interference in the attorney general’s criminal responsibilities, there’s a strong convention that he or she should resign, in the same way sometimes people talk about how the Bank of Canada governor, if he was directed to do something by the Prime Minister, would have to resign. It’s not that he’s done something wrong, it’s that the attack on the office is so egregious.

Q: The law that’s in play here, though, allowing what’s called a deferred prosecution agreement, is very new. And it has as one of its main purposes protecting the “public interest,” including the government’s aim to “protect jobs of innocent employees and investments of innocent shareholders,” according to the government’s background documents on the law.

Doesn’t it make sense when those considerations are involved that all sorts of government voices might urge the attorney general to take into consideration factors beyond what’s normally involved in a criminal case?

A: She could certainly consult with the Prime Minister’s Office and cabinet, but she couldn’t take direction from them. The final decision has to be hers.

Q: I don’t think the Globe and Mail story that started all this mentions anything that could be interpreted as “direction,” though. The allegation is that there was some level of pressure.

A: The line is between suggesting policy considerations and trying to dictate what the attorney general does. I don’t want to speculate. You can imagine the Prime Minister’s Office saying, “There are issues you should take into consideration for the sake of the national economy.”

Q: I guess the question then is, how much legitimate discussion of that sort could happen before the line was crossed into unduly pressuring the attorney general?

A: The short answer is, it’s not clear yet. Certainly, I imagine whatever happens in this situation will be a precedent for later. It’s a complicated situation.