Why Stephen Harper doesn’t want to talk about 'women's issues' 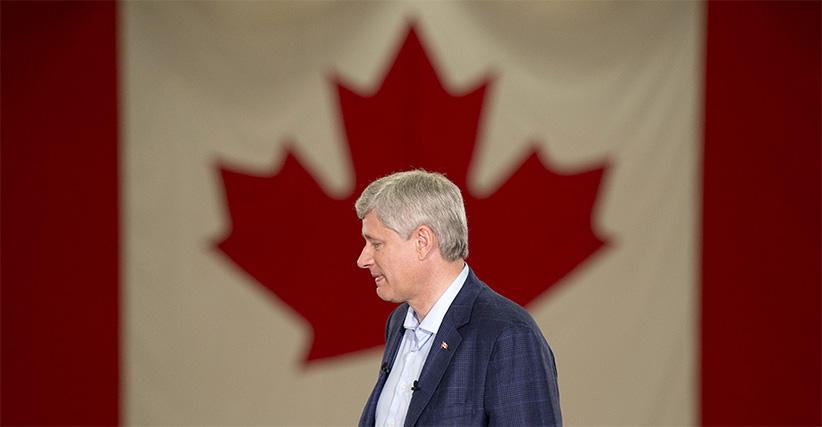 Last night’s “All-Candidates Debate on Women’s Rights & Gender Equity” in Halifax was falsely billed: not all candidates were present. NDP candidate (and incumbent) Megan Leslie, Andy Fillmore of the Liberals and Dr. Thomas Trappenberg of the Green party agreed to participate. Conservative candidate Irvine Carvery sent his regrets, pleading a previous engagement. Given that the four riding associations were informed about the debate last December, Carvery’s schedule must be busy indeed. Speculation over whether Carvery’s no-show was part of a larger party strategy was inevitable, given the fact Stephen Harper declined to participate in a national leaders’ debate on issues classified as “women’s” (or the more modern “gender”)—inequality, violence against women and girls, and child care—proposed by Up for Debate, an alliance of “more than 175 women’s organizations and their allies.” That event imploded after Harper said no, leading Tom Mulcair to bow out. The group  turned to “Plan B,” says Up for Debate spokeswoman Kelly Bowden—interviewing the NDP, Liberal, Green and Bloc leaders separately for 20- to 30-minute videos to be aired Sept. 21. Again, Harper said no thanks.

That’s the result of scheduling priorities, Conservative spokesman Kory Teneycke told Maclean’s in an email: “Between debates and interviews, there are hundreds of competing requests that come in over the course of the campaign; it is only possible to grant a small number. We don’t comment further on our decision-making process.” Harper agreed to participate in five leader debates this election, says Teneycke: “That is 2½ times more than is typically the case.”

That Up for Debate’s request didn’t make the Conservatives’ top five should surprise no one. The Conservatives’ position on topics and initiatives pertaining to “women” and “gender” has vacillated between attack and avoidance since they came to power in 2006. Asking Stephen Harper to debate “women’s issues” is a little like asking Sylvester the cartoon cat to debate “Tweety Bird issues.” Shortly after its 2006 election, the government removed the word “equality” from the mandate of Status of Women Canada, a federal government organization formed to “promote equality for women and their full participation in the economic, social and democratic life of Canada” (“equality” was reinstated after protest). Cuts to funding of that organization saw 12 of 16 regional offices shuttered and the elimination of the $1-million Status of Women Independent Research Fund. Funding criteria was redrafted; dozens of women’s service providers (including rape crisis centres) that engaged in advocacy or lobbying for law reform, became ineligible for funding or saw budgets slashed.

Harper also drew bipartisan ire the day the election was called by being a no-show at the funeral of Flora MacDonald, the former Conservative MP credited with leading the advance of women in modern Canadian politics (Minister of Status of Women Kellie Leitch represented the government). Nor was MacDonald, the first woman to run for the leadership of Progressive Conservatives and the first female foreign minister in the developed world, afforded a state funeral, an honour given Jack Layton and Jim Flaherty. The only recognition from Harper’s office was a short tweet that incorrectly spelled MacDonald’s surname with a lower-case “d.”

In any leaders’ debate talking violence against women, Harper’s record on murdered and missing Aboriginal women would also make him a ready target. In 2010, the government put conditions on the $500,000 given to the Native Women’s Association of Canada’s Sisters in Spirit project: it could continue to raise awareness of missing women, but had to halt its “Sisters in Spirit” tracking database. The government claimed it would be providing support for victims by allocating $4 million for a general RCMP missing persons’ information centre. In a November 2014 interview, the PM acknowledged missing and murdered Aboriginal women “isn’t really high on our radar, to be honest.”

The statement seemed decidedly tone-deaf coming at the end of a year filled with renewed feminist activism and mobilization triggered by a cascade of high profile cases of alleged sexual assault and institutionalized sexism—Jian Ghomeshi, Bill Cosby, the Dalhousie Dentistry school Facebook page, to name a few. That climate galvanized the creation of the Up for Debate alliance, said to represent some four million Canadians, last fall, says Bowden. “We wanted to bring women’s issues to the forefront in the election.” The debate was viewed as a primary mechanism, a way of focusing the conversation, she says: “The leaders talk about employment in national debates—but nobody’s talking about precarious work, part-time work, single mothers in the workforce,” all topics that affect women disproportionately.

That we have to look back 30 years for the first (and last) time major party leaders debated “women’s” issues during a national election is telling—as is the fact that we’re still framing the conversation in retrograde lingo that makes it sound as though systemic social issues are women’s problems to solve. Watching the 1984 debate, an event organized by the National Action Committee on the Status of Women, is like watching Groundhog Day, so little has changed. Liberal prime minister  John Turner, Conservative leader Brian Mulroney and NDP leader Ed Broadbent squared off over topics still debated today—female inequality, day care, abortion and the arms race (apparently only women cared about nuclear annihilation and preserving the peace). Gloomy stats were trotted out: 47 per cent of families were headed by women and most women over 65 lived in poverty. Only 10 per cent of women who worked benefited from child care.

“Women have forced politicians to discuss this unacceptable situation,” said Broadbent, who called inequality “a fact of life for women.” (The NDP leader was declared the debate’s winner by Maclean’s in its coverage.) Mulroney won that election; his promise of a national daycare program—that chimera in Canadian federal politics—contributed to his victory. He failed to deliver.

Whether so-called “women’s issues” will become an inconvenient truth of this election remains to be seen. Women comprise slightly more than half the population. They’re also more likely to vote. According to Elections Canada, they participated in the 2011 general election at a slightly higher rate (59.6 per cent) than men (57.3 per cent). What they don’t do, of course, is vote as a block. Still, all parties have policies addressing women or “families.” Conservatives have their family tax credit. The NDP unrolled a $15-a-day national daycare plan and can boast of being the party with the highest percentage of female candidates (43). The Liberals are proposing equal cabinet appointments for women (a first), the Greens have a “women’s equality” platform that includes pay equity legislation.

The absence of a national debate could have unintended consequences in spurring a flurry of events such as last night’s in Halifax and the Oct. 8 “This Election Matters to Women” discussion hosted by the Council of Women of Winnipeg. Lawyer Lore Mirwaldt, who sits on the council’s executive, sees renewed advocacy: “I’ve never seen an election like it in terms of engagement,” she says. “We’re at a point that we’re just not willing to put up with pat answers.”

Bowden also reports change: “We’re seeing renewed strength with women’s organizations coalescing,” she says. Women are driving the discussion for two reasons, Bowden notes: “Because they’re most affected, and because no one else is.”

She rejects the idea that focusing on women’s issues reduces women to a special-interest group. “These are issues that affect the entire population and well-being of the country.”

Mulroney made the point in 1984: “Women’s issues don’t only concern women but are of concern to us all.” It’s an excellent bromide but, if 30 years has taught us nothing, “women’s issues” will be dismissed until they’re reframed as problems that affect economic performance, social justice, the well-being of the “middle class” so beloved by politicians, and that most modern of mantras, “quality of life.”

Connecting those dots is easy enough. The cost of sexual violence, for instance, catapults it beyond mere “women’s issue” to “economic issue”: Federal public spending to address violence against women was $2.77 per person for the 2011-12 fiscal year, according to the Canadian Centre for Policy Alternatives, which estimated the combined cost of adult sexual assault and intimate partner violence in 2013 at $334 per person annually in Canada—on par with the cost of the use of illegal drugs or the cost of smoking. A 2013 Department of Justice study revealed that spousal violence to women and men costs the economy $7.4 billion in 2009 in missed work, medical services, policing and justice; it also noted the figures are likely an underestimation given that data were not available in some areas.

The need for national discussion given renewed  urgency with this week’s leak of an internal government report by Status of Women Canada that revealed Canada has fallen well behind other developed countries in gender equity. Dated Feb. 10, 2015, the document, obtained by the CBC under Access to Information, served as an echo chamber of the stats denouced in the 1984 debate: poverty rates are rising for elderly single women and for single-parent families headed by women. Those most vulnerable are recent immigrants and off-reserve Aboriginal women. But the takeway was concerning. Canada was listed in the bottom ranks in terms of the pay gap between men and women, with government support for child care and parental leave well below average. It pointed out that, unlike Australia and Ireland, this country lacks a national strategy to halt violence against women. Canada ranked 52nd in terms of female representation in Parliament. There were bright spots: Canadian women are better educated, and are entering the workforce in greater numbers. The Conservatives do have successes they can cite, says Bowden, pointing to Harper’s 2010 Muskoka Initiative aimed at improving women’s and children’s health in developing countries. Meanwhile, at home, we’re left with plenty of fodder for debate, whether the politicians want to participate or not.

This is the first installment of The Flora Portal, a project named in honour of Flora MacDonald, the trailblazing Canadian politician and humanitarian. Anne Kingston will be tracking issues and stories pertaining to women and female participation in the 2015 election.