Why the federal election might not happen on Oct. 21

The set date is a high holy day for Jews, with possible implications in some battleground ridings. A court battle this week could force a shift. 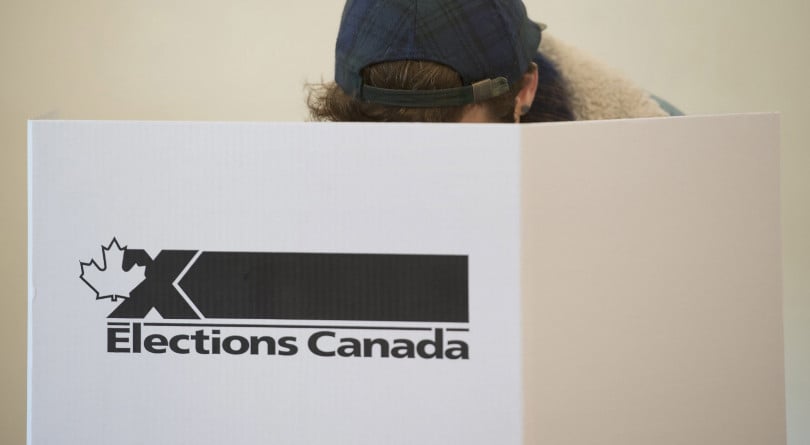 A woman marks her ballot in the riding of Vaudreuil-Soulanges, west of Montreal, on Oct. 19, 2015 (THE CANADIAN PRESS IMAGES/Graham Hughes)

Update: On July 23, a Federal Court ruling ordered Canada’s chief electoral officer to reconsider his decision not to change the date of the federal election.

Chani Aryeh-Bain had just four days to soak in her victory before the trouble began. On April 14, 2019, the 51-year-old mother of five handily clinched the nomination to run for Parliament under the Conservative banner in her lifelong riding of Eglinton–Lawrence in midtown Toronto. She was so excited, she didn’t take a good look at the election calendar until days later. Nobody on her team did.

“We did not clue into the extent of the disadvantage immediately,” says Ira Walfish, a community activist who volunteered for Aryeh-Bain. Four days after she secured the nomination, Aryeh-Bain crafted a worried email to Canada’s Chief Electoral Officer, Stéphane Perrault, requesting he change the date of the federal election. They hoped for the best, but Walfish remembers the team’s mindset at the time: “This is not gonna go well.”

The solution could have been simple: move Canada’s federal election date to Oct. 28. The problem? The date is currently set for Oct. 21, which is also, in 2019, a somewhat obscure but important Jewish holiday called Shemini Atzeret.

Most non-Jews haven’t heard of Shemini Atzeret. (Many non-religious Jews haven’t, either; even the etymological origins of the Hebrew word “atzeret” are vague.) It is nonetheless a high holy day, following a flurry of the most sacred holidays in Judaism, which together block off huge swaths of September and October in any observant Jew’s calendar.

“Shemini Atzeret is the vacation to recover from the holiday,” writes Carla Naumburg in an article titled “In Which I Finally Figure Out What Shemini Atzeret Is”, published in Kveller, a magazine for Jewish mothers. “To just chill and take it all in, to stop, pause, hold back, and keep in.”

READ MORE: This week’s 338Canada projection: All bets are off

Aryeh-Bain and many of her team members and volunteers, including Walfish, are modern Orthodox Jews—not black-hat Hasidic, but they strictly keep kosher and observe Shabbat and other holidays. Despite Shemini Atzeret’s comical ambiguity, observant Jews are strictly forbidden from working or travelling on the day, and are instead encouraged to reflect and pray. They definitely can’t canvas constituents to vote. Indeed, they can’t even vote.

The holiday’s loose definition is perhaps why Perrault, upon seeing Aryeh-Bain’s email, did not respond with any urgency for three weeks. When he finally did, according to court documents, Perrault called the timing “unfortunate,” but noted Elections Canada did not choose the date and the election was too soon to alter.

That didn’t satisfy Aryeh-Bain, and the broader Jewish community slowly awoke to the problem at hand. Over subsequent months, Jewish leaders, activists and several Liberal MPs—including Aryeh-Bain’s incumbent opponent, Marco Mendicino—all wrote to Perrault, urging him to move the date. Failing that, community organizations hoped for some kind of compromise. Michael Mostyn, CEO of B’nai Brith Canada, wrote in an op-ed in the Toronto Star that they asked Perrault to add another polling day convenient for observant Jews. “Elections Canada has never explained why it did not pursue this least-disruptive course of action,” he wrote.

The only option, after so many letters, was a legal battle. Aryeh-Bain and Walfish mounted a lawsuit against Elections Canada in June, scheduled to be heard in Toronto’s Federal Court this week, on July 16. Elections Canada is not responding to queries about it, but in March, a spokesperson told The Canadian Jewish News that voters can always use advanced polls or apply for special ballots before Oct. 15. Critics argue those measures are insufficient—data suggest 75 per cent of those Canadians who actually vote do so on election day, while three per cent choose convoluted special ballots—while even advanced polls are obscured by the minefield of autumnal Jewish holidays and weekly Shabbat services. While most Canadians will enjoy 60 hours’ worth of voting opportunities this year, observant Jews are limited to just 17.

In their application, Walfish cites a community of 75,000 observant Jews who will be directly affected by the conflicting date, while their evidence includes more than 140 concerned letters written to Elections Canada. Modern Orthodoxy is the second-most prominent sect among self-identified Jewish Canadians after Conservatism, according to a recent report by the Environics Institute; with approximately 350,000 Jews across the country, the impact of the decision could be significant.

“It’s a major problem,” Walfish emphasizes. “This keeps happening. It’s like, hello? Get out a calendar. It’s in the [Canada Elections] Act. Just move the stupid election…. They can move it if they want to. I can’t change the religion.”

Walfish points to the precedents supporting their case. In 2007, Ontario’s provincial election also coincided with Shemini Atzeret—and the government agreed to change that date. Conversely, in Oct. 2018, Elections Quebec declined to compromise after learning that, once again, it coincided with the same holiday.

“The turnout was dramatically affected,” recalls David Tordjman, a modern Orthodox candidate running this year for the Conservative Party in Mount Royal, Que. Tordjman might have even more to lose than Aryeh-Bain: last October, voter turnout in neighbouring D’Arcy-McGee, Quebec’s most densely Jewish riding, plummeted from 72 per cent to 44 per cent, due to overcrowding and hours-long lineups at poorly managed advance polling stations. This year, Tordjman sees the same frustration across social media.

“The issue, at the end of the day, is accessibility,” he says. “All we want is the same capacity and the same amount of time to vote.”

Both Tordjman’s and Aryeh-Bain’s ridings are home to more than 20,000 Jews, according to the 2011 National Household Survey, and both are potentially crumbling Liberal strongholds. Liberal Joe Volpe ran Eglinton–Lawrence for 20 years until Stephen Harper’s future finance minister, Joe Oliver, ousted him in 2011; in 2015, Mendicino narrowly won it back by fewer than 3,500 votes. Mount Royal, once Pierre Trudeau’s stalwart base, was run by legendary Jewish MP Irwin Cotler for 16 years until he resigned, passing the mantle to Liberal Anthony Housefather in 2015.

In 2019, under a simmering froth of negative sentiment toward Prime Minister Justin Trudeau and newly elected right-leaning provincial governments, both are potentially battleground ridings—especially Eglinton–Lawrence. As it stands, Aryeh-Bain “will be precluded from getting out the vote on the most important day of the election,” the court application states. “In short, she must fight the election with one hand tied behind her back.”

There is a very real chance, if the date remains unchanged, that Shemini Atzeret could decide the riding. If it does, this won’t be the last court battle mounted against the government—if not this election cycle, then perhaps next time an election falls on Shemini Atzeret, which can’t be too far away.

CORRECTION, July 15, 2019: An earlier version of this story included an incorrect estimate of the number of Jewish people in the ridings of Eglinton–Lawrence and Mount Royal