Why the NDP is losing Quebec voters

The NDP’s path to power relies on Quebec voters. They appear to be suddenly jumping ship. 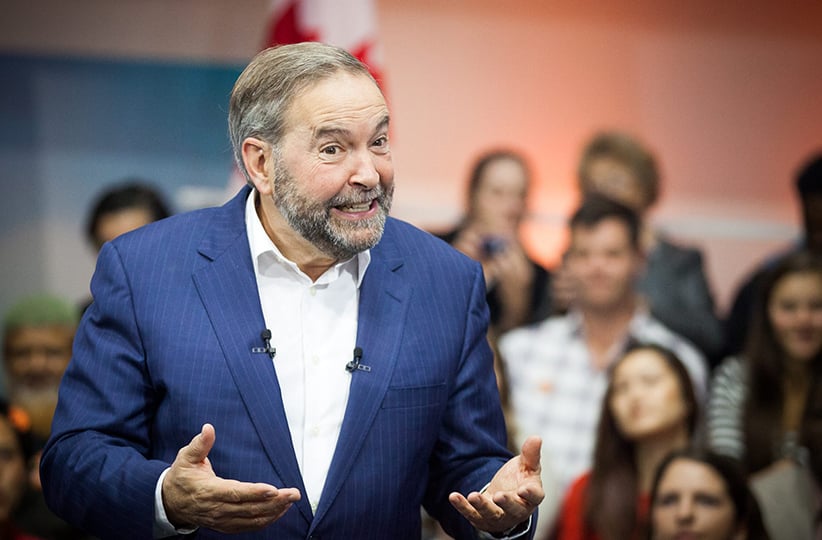 Jay Hill will vote for anyone who can beat Stephen Harper’s Conservatives. A tech entrepreneur by trade, the 35-year-old transplanted Montrealer has become anti-Harper by design, due mostly to what he calls the “campaign of fear” wrought by the Conservatives. “Certain things fly in the face of what it is to be Canadian,” he says.

A month ago, this meant his vote would have gone to the NDP, as it did in the 2011 election. With 54 of the province’s 78 seats, the party looms large over Quebec, and its sustained popularity over the last four years has created an opportunity long elusive to left-leaning Quebec federalists: a credible progressive bulwark against both the Conservatives and the separatist Bloc Québécois.

Yet in the face of sliding national polls and a resurgence of Justin Trudeau’s Liberals, the Quebecer is rethinking his vote. “If the NDP would have needed my vote to win a majority government and kick out the Conservatives, then it would have my vote,” Hill says. “But I don’t think the NDP is going to form a majority, and [NDP Leader Tom] Mulcair hasn’t really engaged me over the last six weeks of the election.”

For the NDP, which has spent much of the last four years selling itself as a proper government in waiting, it has become a significant problem: What if people start believing that that’s simply not going to happen? The problem is all the more acute in the NDP’s base of Quebec, through which the party’s path to power flows. “We aren’t going to form a government without a strong representation in Quebec,” says NDP spokesman Marc-André Viau.

For the NDP, keeping what it already has in Quebec is suddenly an uphill battle. The party has stumbled nearly 17 points from its late-August high point of 46 per cent in the province, according to the poll aggregator of French-language magazine L’actualité. And while the party remains the favourite among francophone voters, the Bloc has had some success in recouping its vote, largely at the expense of the NDP.

The Conservatives have slowly inched their way into viability in the province, particularly in and around Quebec City. For the Conservatives, this is electoral gravy. Since its creation in 2003, the party has never relied on Quebec to form a government. The Liberals, meanwhile, have made some gains in and around the island of Montreal, though much remains in flux. “Nowhere else in the country do you see such a volatility in vote share,” says Clifton van der Linden, CEO of Toronto-based independent research firm Vox Pop Labs.

The NDP’s Quebec campaign started off strong. The party’s solid standing in the province, burnished in large part by Mulcair’s personal popularity, led the province’s normally sovereignist union movement to support a raft of NDP candidates in the coming election. Several Parti Québécois partisans told Maclean’s—anonymously, bien sûr—that they would vote for the NDP for the same reason.

There are several potential reasons behind the NDP stumble, not the least of which is Mulcair himself. The NDP leader was in discussions to join the Conservatives before he ran for the NDP in 2007, though, as Maclean’s revealed in June, negotiations allegedly broke down over salary. In his past political life as a member of Quebec’s Liberal party, he praised former British Conservative prime minister Margaret Thatcher, questioned the wisdom of subsidized daycare, and supported bulk water exports. These revelations, which fly in the face of NDP doctrine, came about during or just prior to the election campaign, and have added weight to his reputation (deserved or not) as a power-obsessed political opportunist.

Others have suggested the slip had to do with the party platform. The NDP’s sudden aversion to deficit spending isn’t a huge hit in Quebec, whose own zero-deﬁcit edict has resulted in substantial provincial program cuts. As well, much of Quebec’s political class is against the abolition of the Senate, another key NDP plank. The NDP plan for a countrywide subsidized daycare system, meanwhile, isn’t necessarily an electoral draw in a province that has had subsidized daycare since 1997.

More recently, Mulcair was decidedly unclear on his position regarding the Trans-Pacific Partnership, before he came out against it. And his opposition to the trade deal announced this week, no doubt influenced in part by the party’s strong union stance, has put it at odds with public opinion.

Finally, there is the obvious: “As the frontrunner, you get attacked, and I guess the Conservatives and Liberals were successful in their attacks,” says Viau.

The NDP counterpunch began in the first full week of October, with a new advertising strategy in Quebec. According to the plan, which Viau shared with Maclean’s, the NDP sent out two million NDP leaflets to Quebec mailboxes. The party also launched new television and radio advertisements. Forty per cent of the ads are negative, 60 per cent are positive. (Tellingly, all of the NDP’s negative ads are aimed at the Conservatives, which fits with what has been the NDP’s line of attack since the campaign’s outset.)

The mix changed somewhat this week, to 80 per cent positive and 20 per cent negative. “People will be discussing who they want to vote for during Thanksgiving dinner. We want to tell them why they should vote for us and not against Harper,” Viau says.

Surprisingly, one very noisy and divisive issue appears not to have hurt the NDP: the niqab. In 2011, the Conservative government issued a directive prohibiting the wearing of the Islamic face covering during citizenship ceremonies. A Federal Court struck down the directive last February; despite this (or perhaps because of it), the Tories campaigned heavily against the wearing of the niqab during citizenship ceremonies.

Mulcair came out strongly against the ban, despite a widespread anti-niqab sentiment in Quebec. The move had many observers suggesting the NDP would suffer as a result. Yet there is evidence that the niqab isn’t an important ballot box issue after all. In an early September Vox Pop Lab analysis of more than 164,000 responses to its Vote Compass, which measures voter priorities, “religious accommodations” was the second-last of 25 priorities among Canadians, well behind top issues such as the economy and health care.

A similar analysis one month later, this time of nearly 290,000 respondents, was virtually identical. Only language issues were less important to Canadians. “This is not the ballot-box issue for most Canadians, pure and simple,” says van der Linden.

Recent NDP internal polling suggests a mixed bag for the party in Quebec. In the largely rural riding of Shefford outside of Montreal, which the NDP wrestled away from the Bloc in 2011, the party’s own polling found that the NDP is the favoured party, and Mulcair is the most popular potential prime minister. Yet the polling also suggests that most Sheffordians believe the local Liberal candidate will win the election, and that the Conservatives will form the next government. Of course, should Harper’s anti-niqab gambit fail—and the data suggest it will­—the NDP could do better than the polling suggests in those many ridings where it’s a battle between the NDP and the Conservatives.

Even so, among voters in the Quebec City riding of Louis-Hébert, which the NDP has held since 2011, the NDP and the Conservatives are neck and neck, with local candidate Denis Blanchette and Conservative Jean-Pierre Asselin scoring 30 per cent and 31 per cent, respectively, according to the NDP’s own polling. Similarly, Harper and Mulcair are seen as equally good prime ministers. The not-so-good news for the NDP: By a two-to-one margin, riding voters believe Harper will win the election.

This sort of thing scares Jay Hill. A month ago, he was willing to bet on the NDP to remove Harper, but no longer. His switch, he says, is a reflection of what he sees as the NDP’s diminishing chances in Quebec and beyond. He’s unsure about Justin Trudeau—“I worry about his abilities,” he says—yet nonetheless utters the three words no one in the NDP wants to hear. “I’m voting Liberal.”