How Canada fits into Rex Tillerson's plan for North Korea 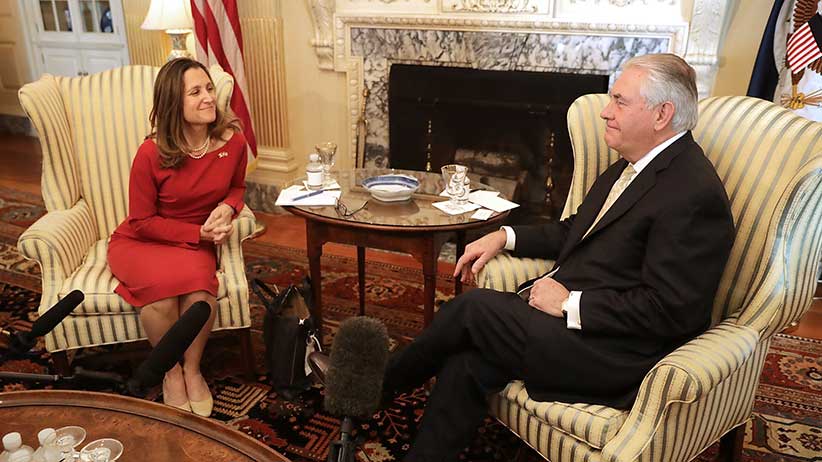 This is all a little weird.

The Korean War was mostly a big headache for Louis St. Laurent. The courtly Quebec lawyer had been Canada’s prime minister for just over seven months when North Korean forces invaded the South, on what was, in Ottawa time, a Sunday in June, 1950.

St. Laurent liked to think of himself as more activist and interventionist than his cautious predecessor, W.L. Mackenzie King, but as King’s foreign minister St. Laurent had already been whipsawed by postwar politics in Europe. There was a shattered Western Europe to rebuild after the Second World War, but the great powers elbowed Canada out of a direct administrative role in divided Berlin, and King and St. Laurent took that as their cue to bring Canada’s tired troops home. But within two years, the tightening Communist grip across Eastern Europe led to rapid re-militarization. Canada would reap no great peace dividend; Canadian troops would not be long returning to Europe, to remain for a generation.

What did Korea have to do with any of this? Already Europe’s a nuclear-tipped quagmire and St. Laurent’s supposed to worry about Korea? He hoped the new UN Security Council would be deadlocked, as it already usually was, but the Russians were boycotting it, and soon not only the Americans but the Brits, Australians, New Zealanders and the Dutch had sent warships to the region. Canada followed suit with two destroyers (my source for most of this is the writings of Blair Fraser, one of my predecessors at this magazine).

By mid-July the invading North Koreans had pushed past their southern cousins and a not-yet-adequately-numerous line of defending Americans and overrun Seoul. The UN Secretary General called on all member states to defend South Korea. It was a Friday. St. Laurent was fishing. He finally drove in for the regular Wednesday cabinet meeting. Reporters waited for word from the meeting. St. Laurent had some. “Well, gentlemen, I hope to be fishing again by the day after tomorrow.”

It was August before he announced the dispatch of Canadian ground troops — a brigade that would be recruited for task, rather than assigned from regular forces. The first Canadian soldiers finally moseyed into Korea in February; the bulk of the force wouldn’t be in place until May. Canadian soldiers are often measurably more game than their leaders; these fought like hell once they’d arrived, took heavy casualties, helped push the North Koreans back and hold the line in the divided country.

WATCH: Rex Tillerson on North Korea: “All options remain on the table”

It all seemed so distant to Canadian preoccupations, even as it was happening. Writes Fraser: “At one point the Vancouver Sun ran the same Korean War story on its front page for three days running, then gleefully announced that not a single reader had noticed this fact.”

But for today’s purposes, perhaps what’s most germane about the Korean War is that as a matter of treaty law, it never ended. The 1953 armistice that ended the fighting was an agreement among armies to stop fighting, pending “a final peaceful settlement” among governments. That peace treaty never arrived. So United Nations Command — Rear, a base set up in Japan in the 1950s, has never been abandoned. Command at UNC-R rotates among several “sending nations,” meaning those that responded — however reluctantly! — to the UN’s call in 1950. That included Canada. The current Deputy Commander at UNC-R is Maj. Tammy Hiscock of the RCAF. I’m told there are about half a dozen Canadians over there all told.

This would be merely an odd coincidence of nature, a geopolitical appendix never removed, except that North Korea keeps testing ICBMs, and the Americans have been talking — since before Donald Trump was elected, it’s worth noting — about “revitalizing” the United Nations Command and the mandate and responsibilities of the “sending nations.”

That’s why it’s really interesting that on Nov. 28, after the most recent and potentially destabilizing North Korean missile test, Rex Tillerson, the U.S. Secretary of State, announced a meeting “in partnership with Canada” of “the United Nations Command Sending States.” It takes a little detective work to find a current list of sending states; it seems to include Australia, Canada, France, New Zealand, Philippines, Thailand, Turkey, the United Kingdom, and the United States.

This is, of course, all handy background for Tillerson’s Ottawa visit on Tuesday, when he’ll meet Foreign Minister Chrystia Freeland and Prime Minister Justin Trudeau. I drag you through all this diplomatic history, first, because it makes interesting reading, and also because it’s germane to the day’s events. Germane but not determinative: It would be fun if I could claim that a 64-year-old treaty locks Canada into the next chapter of land war in Asia, but there are two problems with that story.

First, this isn’t World War I; no old signature locks Canada into anything. But it does provide a basis for Canadian involvement, a reason if not a requirement, and that’s handy because Rex Tillerson, at least, is still trying to avoid a war in, around or over Korea. As he put it in his own communiqué invoking the “Command Sending States,” “Diplomatic options remain viable and open, for now.” Tillerson rather famously differs from his boss, Donald Trump, on this question, and there’s been speculation it could cost Tillerson his job. This would be a serious problem for, among billions of other people, Chrystia Freeland, whose most important regular U.S. interlocutor is Tillerson. But in the meantime, Tillerson is interested in Canada, not for the trivially modest contributions it could make to a very nasty shooting war, but to the potentially greater contributions it might make to avoiding one.

Again over the public objections of his doofus boss, Tillerson has been trying to lure the North Korean regime into serious talk over alternatives to the current brinksmanship. This is a long shot: direct public talks involving Americans and North Koreans haven’t happened since the so-called six-party talks collapsed in 2009. Who could lure them back? Maybe Canada. Or maybe not. But maybe. We would at least be a fresh face, and Trudeau’s good relations with the Cuban regime might help. It’s worth a try. The alternatives to talking are nasty.

Unlike St. Laurent, Justin Trudeau will tend to see North Korea as a welcome diversion from other issues. First, because Canada would not, at this stage, be getting dragged into a fiercely kinetic ground combat, but seeking to avoid that or far worse. Second, because progress against (or with) North Korea would be a way of reasserting Canadian good faith on an issue that, policy options aside, preoccupies both the U.S. president and his Secretary of State. A reminder for all concerned, the president first among them, that Canada can be a source of solutions, not just problems.