Justin Trudeau will hold winter meetings there. Stephen Harper made a series of Ontario-centric moves. And it's all because of the impending election. 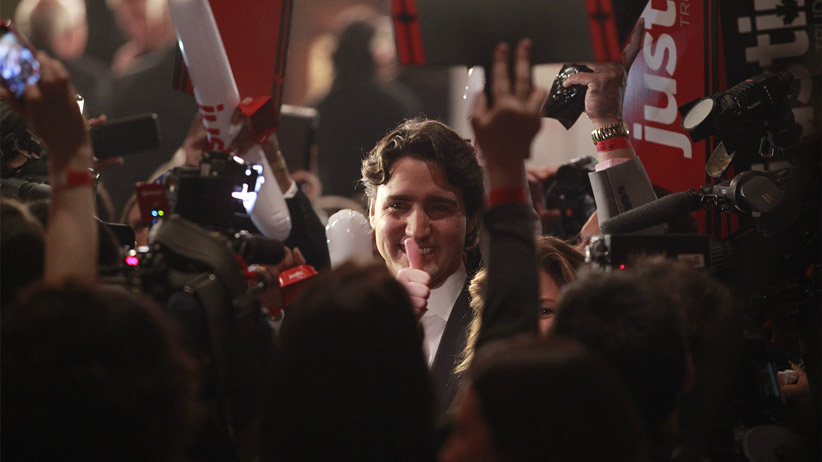 Stephen Harper set a crisp tempo in his first days back on the job after Christmas break. On Monday, the Prime Minister demoted Julian Fantino from his post as veterans affairs minister and met with Kathleen Wynne, whom Harper dislikes but who is Ontario’s premier. On Tuesday, he shook up the senior ranks of the bureaucracy. Now the senior ranks tend to shake now and then, and you need take no note if your own career isn’t involved. But for the rest of it, the PM was making it even clearer that an election is coming.

Fantino was not well-loved by veterans’ organizations, a constituency the Prime Minister’s Office actually doesn’t worry much about: The Conservatives draw a distinction between veterans’ organizations, which are never satisfied with this government, and veterans themselves, who sometimes can be. But Fantino’s lousy bedside manner was becoming a broader stain on the government’s reputation. He has landed gently, in a junior Defence portfolio, where he will not have to interact with actual people who have problems. His replacement is Erin O’Toole, an impressive young MP from a riding 90 minutes’ drive northeast of Toronto. O’Toole used to fly in Sea King helicopters for the Navy, so he knows a thing or two about choppy waters, and he had already been working hard on veterans’ issues before his promotion.

If a thread connects all this activity—Fantino’s soft landing, O’Toole’s promotion, Wynne’s partial gratification—it is Ontario, where all these characters live and work. There’s a reason why my Big Book of Columnists’ Clichés automatically falls open to the page marked Vote-Rich Ontario: Its 121 seats in the next election will be more than a third of all the seats in Canada, and all three big national parties look competitive across much of that expanse.

Which explains why Justin Trudeau and the federal Liberal caucus will hold their winter strategy session in late January in London, Ont. After that meeting wraps, Trudeau will wander through southwestern Ontario for a few days, test-driving early drafts of campaign speeches in front of assorted crowds. In politics, it’s always wise to watch a politician’s feet, as well as his mouth. Trudeau’s feet will be in vote-rich Ontario—see how trippingly it comes off the tongue?—for a reason.

The Liberals did 15,000 telephone interviews in late autumn with whomever would pick up the phone and talk to a telemarketer, in an ambitious attempt to identify what one of Trudeau’s helpers called “market opportunities” as an election approaches. Those opportunities are demographic—income brackets, family configurations, job types that might correspond with an increased likelihood of voting Liberal—and geographic. This source professed great hope for his party in the urban West and francophone Quebec, but probably only over “the long term”—a phrase I hadn’t heard a Liberal pronounce in ages. In the near term, which means this election cycle, realism and precedent dictate that if market opportunities appear in Calgary and, say, Hamilton, the Liberals will work harder to lock Hamilton down.

Trudeau ran for the leadership with a promise to “build the team and build the plan.” The plan has been vague to date, but if Harper ever looks like he might call an election earlier than the October date theoretically fixed in law, Trudeau will announce a significant part of his economic platform, to compete with Harper for attention or to dissuade him from an early election.

But there will probably be no need. The Liberals and New Democrats I talk to don’t really believe there will be an early election. “They’ve got $40 million to spend,” my Liberal source said of his Conservative foes, who are still winning each quarter’s fundraising competition. “They can only spend $25 or $26 million in a writ,” that is, during a formal campaign period, because Elections Canada monitors these things closely. “Why would they go now?”

Why indeed. If Harper waits until autumn to launch the battle, summer “won’t be much of a summer. I mean, nobody will take a vacation. Everybody will basically be campaigning until the official campaign begins.”

Trudeau’s opponents are itching for a shot at him. The entertaining rumour is that Harper and NDP Leader Tom Mulcair would like a lot of televised leaders’ debates, the better to lay out acres of banana peel for the new kid to slip on. If Trudeau finishes the way his party’s last two leaders did, it will be bad for Liberals. On election day in 2011, there was a 14-point gap between Ontario voter support for the government of the premier of the day, Dalton McGuinty, and support for the federal Liberals of Michael Ignatieff. Exit Ignatieff.

Trudeau’s Liberal credentials are more solid, in theory. He should be able to pull the Liberal vote, in theory. This is the year theory meets practice. This corner offers no predictions. But expect a lot of Trudeau in Ontario.