Ahead of the 2019 election, it’s hard to imagine Trudeau’s opponents doing damage to him approaching what he routinely does to himself 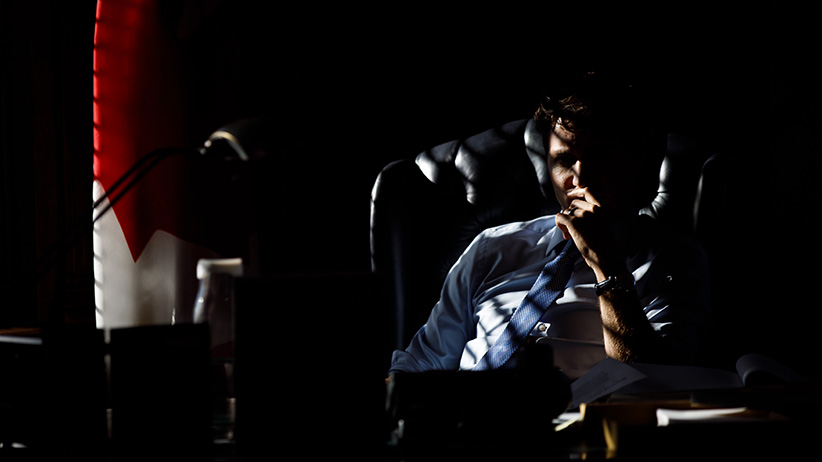 It’s standard operating procedure when predicting an entire year’s worth of politics in advance to protest that it can’t be done. The ritual incantations are many: if a week’s a long time in politics, then a year’s an eternity. Events, dear boy, events. And so on.

Yet for all his supposed dynamism, what’s striking about Justin Trudeau at the dawn of 2018 is how closely his prospects and pitfalls resemble what he faced at the dawn of 2017. The surprise with this Prime Minister is that he is becoming a known quantity.

Here’s a Toronto Star headline from Jan. 7: “Justin Trudeau tries to shake air of entitlement.” A year later, he’s still shaking. Another January headline: “Trudeau’s Trump tactics seem to be working—so far.” Still true, so far. A year ago, we didn’t even know which party leaders Trudeau would face at the next election. Now we know, but it doesn’t help: Andrew Scheer and Jagmeet Singh have made hardly any progress imprinting their personalities and projects onto the national psyche.

The likeliest outcome from 2018, then, is that Justin Trudeau will continue to be his own best advertisement—and worst enemy. By the end of the year ahead, Canada will be in the long approach to an election in the fall of 2019. Campaigns are about opponents giving the gears to incumbents, but it’s hard to imagine Trudeau’s opponents doing damage to him on a scale approaching the damage he routinely does to himself.

On the bright side: the Prime Minister continues to bring formidable energy and organizational chops to his big tasks. He won the 2015 debates by outpreparing his adversaries. He responded to Donald Trump’s election in similar fashion, by flooding the zone. Trudeau accomplished what several prime ministers always meant to do, identifying and motivating the most elaborate network of pro-Canadian contacts any Canadian government has ever pieced together on American soil. He has put most of his cabinet, much of his Liberal caucus and even some erstwhile opponents—Conservative icons like Brian Mulroney and Rona Ambrose, the normally adversarial Saskatchewan premier Brad Wall—to work making the case for the NAFTA trade deal, and for Canada more generally, south of the border. He has kept up his warm personal relationship with Trump even as his government has moved aggressively to position Canada as a better home for talent and investment than the United States.

Whether any of this activity neutralizes Trump as an economic threat is a question only time can answer. But it was probably worth doing anyway: someday, when the great republic to the south is under less mercurial executive leadership, it’ll be handy to have all of Canada’s friends on one contact list.

Meanwhile, Canada’s economy is growing nicely. Alberta is rebounding from the worst job losses of the oil crash. Quebec is a relative growth tiger amid the general good news, which helps ensure that separatist sentiment is so low it’s hard to measure.

By the new year, one of Trudeau’s biggest projects, the Canada Infrastructure Bank, should be connecting the world’s biggest institutional investors to very large projects to build Canadian roads, bridges, rail networks and power grids. If the bank works, it’ll mean billions of dollars injected into an already robust economy, in highly visible ways. Meanwhile, new visa rules are making it easier for tech ﬁrms to attract international talent, leading several companies to announce ofﬁce expansions in Vancouver and Toronto.

Trudeau’s early moves on what are sometimes called identity politics are lately looking prescient. The women who comprise half of his cabinet are at least as impressive, on average, as the men who constitute the other half. Trudeau’s gender-parity advocacy—in international development, trade and the military—is mentioned by other world leaders as often as his other economic measures. The zero-tolerance policy that has led to four Liberal MPs leaving the caucus over assorted accusations of personal misconduct seems, in retrospect, to have put the Trudeau Liberals ahead of a societal curve, given recent debates over sexual harassment and misconduct in the workplace.

The Senate, which was rattled when Trudeau kicked every Liberal senator out of his party’s national caucus, is reconstituting itself as an august debating society whose independent-minded new members sometimes forget to support the government. So far it’s at least arguable that the changes Trudeau wrought have improved the place.

That’s a tidy suite of stories an incumbent government can look forward to telling about itself on the campaign trail. And if in the end none of it saves Trudeau’s bacon, it will be because he has already sown the seeds of a very different competing narrative.

Start with that Senate: the new Trudeau-appointed “independents” are actually pretty Liberal, voting most of the time for policies favoured by the Prime Minister to whom each of them had to apply for a job. But not all of them and not all the time. That’s made the Senate the most unpredictable place in Ottawa. Soon enough, some of its members will delay or block crucial legislation, derailing Trudeau’s attempt to deliver on a major commitment. For a while in the spring it looked like it would be the infrastructure bank. These days it’s cannabis legalization. 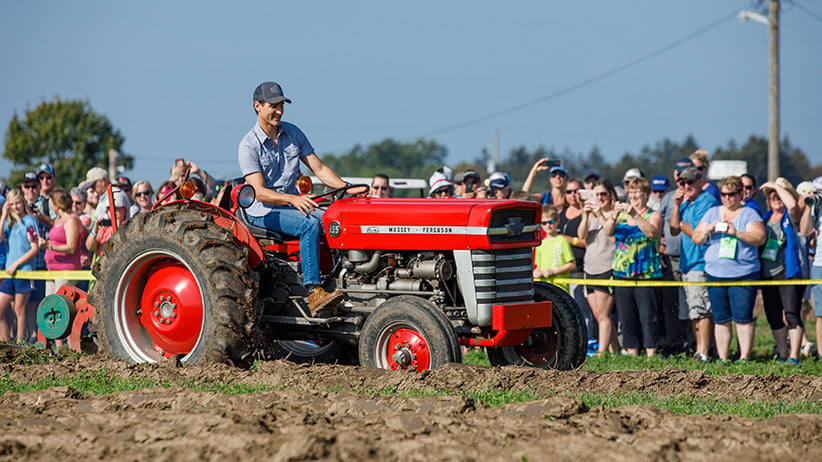 Trudeau’s efforts to position himself as a champion of the middle class have been somewhat undermined by his privileged background. (Adam Scotti/PMO)

It’s not a rebellious spirit that is making the Senate a dangerous place for Liberal projects, merely the unaccustomed outbreak of intellectual curiosity. In June, the upper house came within a vote of considering the infrastructure bank separately from the rest of Bill Morneau’s 2017 budget, a move that could have delayed the proposed bank’s creation. André Pratte, a Trudeau-appointed former La Presse editorialist, wanted the proposed bank studied in more detail. Every Conservative lined up with him, plus a handful of other independents and independent-minded Liberals. That’s the sort of odd geometry that comes into play on vote after vote in the new Senate. There will surely be further chaos in the year ahead.

That matters because Trudeau really needs to deliver results on big ﬁles. If the infrastructure bank is a dud, the energy expended to get it up and running will be hard to explain. What could make it a dud? Perhaps the creeping suspicion among big global investors—fed in part by the infernal difﬁculty oil companies have had getting pipelines built—that Canada is a nice place where nobody ever actually makes a decision.

If drinking water doesn’t get measurably cleaner in Indigenous communities, or the Phoenix pay system can’t work out the bugs, or the Liberals make it through an entire electoral mandate without buying a single serious piece of military equipment, it’ll be all the harder to take “managerial competence” back to the voters and ask for a reﬁll on the mandate. None of these outcomes is a long shot. In fact, it’s starting to look like all three chronic problems are likelier to get worse than better in the next two years.

Trudeau’s relatively smooth ride on federal-provincial relations will be tested in 2018 too. Elections, in Ontario in June and Quebec in October, will threaten two dependable Trudeau allies, Kathleen Wynne and Philippe Couillard. Both have been trailing opposition parties in recent polls. The biggest threat to Couillard comes from François Legault of the upstart Coalition Avenir Québec, a centre-right party whose leader is cheerfully incurious about the rest of the country and whose reflexes on most intergovernmental ﬁles would be fundamentally unpredictable.

In Alberta, there’s no election until 2019, but to beat Jason Kenney, the new leader of the (re-)United Conservative Party, NDP Premier Rachel Notley may ﬁnd herself forced to behave more like him, picking ﬁghts with Ottawa over natural resources. So the PM will ﬁnd himself running short of allies in a year when a lot of his big projects—legalizing cannabis, stitching together a nationwide carbon plan—will require some amount of civility in federal-provincial relations.

Complicating all of this is Trudeau’s increasingly obvious tin ear on questions of class and wealth. It’s worth remembering that the unending calvary of Finance Minister Bill Morneau began on territory the Liberals chose and believed they could work to their advantage: tax fairness. “We need to make sure that everyone’s pulling their weight and doing their fair share,” Trudeau told Maclean’s in a Canada Day interview only weeks before Morneau announced the small-business tax changes that erupted into months of crisis for the government.

Suddenly it’s not obvious why Trudeau thought a manicured plutocrat like Morneau would be a credible champion of the middle class. It’s not clear why he turned to Stephen Bronfman, scion of Canada’s most legendary rich family, to raise money for the Liberals. And it’s far from clear that he understands that every time he talks about “values” and the “middle class,” he comes closer to hurting his case than to helping it.

The Justin Trudeau of early 2017 could have warned him, if only the Justin Trudeau of mid-2017 had been in a mood to listen. In a February speech to a fancy dinner in Hamburg, Germany, he warned that governments risk voter wrath if they don’t take the preoccupations of ordinary voters seriously. “When governments serve special interests instead of the citizens’ interests who elected them, people lose faith,” Trudeau said. “And we’re watching that anxiety transform into anger on an almost daily basis.” Boy, I’ll say.

So 2018 for Trudeau looks like one endless headache—the NAFTA talks—and an existential question. Can Trudeau recover the image of vigour, decisiveness and empathy that won him a healthy majority in 2015? Or will he seem increasingly out of touch with the ordinary Canadians he claims to champion?