Why yes, this is Andrew Scheer's first rodeo

...Or at least his first Stampede as Tory leader. With zingers about Omar Khadr, and wardrobe tips from strangers, he managed to pull through. 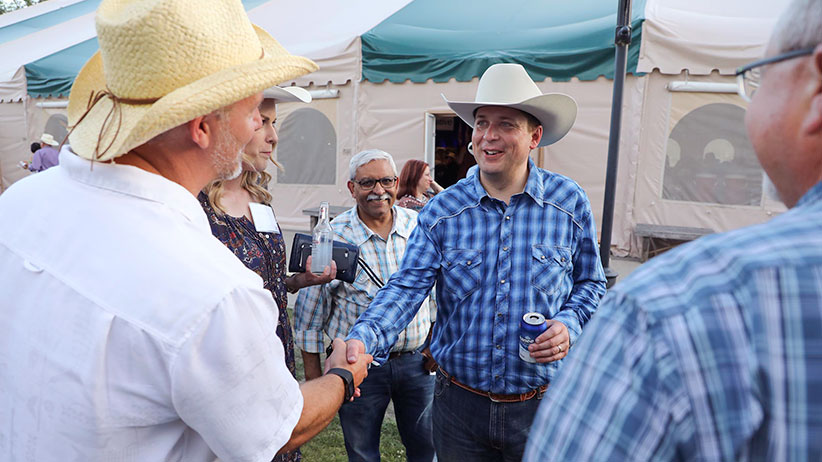 Andrew Scheer is taking a few minutes off from the beer and barbecue of another Stampede party, sitting at a café patio. A stranger approaches.

The Calgarian doesn’t want to talk politics with the new Official Opposition leader; he doesn’t seem to even recognize Scheer, a Regina MP. Instead, he reaches directly for Scheer’s woven-straw cowboy hat, lying brim-down on the table, and flips it over. He doesn’t mean to interrupt Scheer’s conversation, but the Stampede newbie was resting his hat the wrong way.

“I’m just trying to give you a tip, so you look legit,” the man tells the Tory leader. Scheer is intrigued: “What’s the thinking there?”

“Just so you don’t bend your brim.”

He’s been a Conservative prairie MP for 13 years, but Scheer has never been to Calgary’s marquee, 10-day dress-up party. He secured all the requisite cowboy duds at Lammle’s—the local western chain for visitors’ last-second belt buckle and pearl-button shirt needs—but had to learn firsthand the slippery discomfort of wearing dress socks in his cowboy boots. “I might pick up some insoles at Shoppers tomorrow,” he tells Maclean’s on Stampede’s first Friday.

The next day, he’ll skip the pancake breakfast circuit and relax with his wife and five children at a friend’s farm outside Calgary, before returning to Yahoo-ville on Saturday evening to address the $185-a-plate Conservative BBQ fundraiser at Heritage Park—the federal party’s biggest annual event in its spiritual heartland. For years, this was Stephen Harper’s big speech to hometown devotees; this year, his successor would take the hay-bale-bedecked stage.

Big boots to fill, Scheer recognizes. Earlier in the day, the former Commons Speaker returns to the woolly embrace of a suit and tie for a news conference to denounce the $10.5-million settlement and apology to Omar Khadr, but gets upstaged later in the day when the former prime minister performs a Stephen ex machina and himself denounces in a Facebook post the Liberal government’s payout to the formerly imprisoned teen combatant. When an aide suggests Harper might show up at the fundraiser, either Scheer’s eyes bulge or his face attempts a retreat from his eyes. “He is? Okay, that’s not good. I don’t wanna—it’s tough to perform in front of the…” he says, nervously trailing off.

But that’s for another day. On this sunny Friday, Scheer is casual and bubbly, or at least lightly effervescent, with what he recently called his “resting pleasant face.” Some young Tories greet the 38-year-old with a whisky shooter at the Stampede party for a conservative political group dedicated to ousting the Rachel Notley NDP—its name, Alberta Can’t Wait, accurately describing the right-wing mood in these parts. After some introductions, handshakes and photos, Scheer lounges with a beer at the back of the patio. Maxime Bernier dominated the Conservative leadership election in Calgary (and more narrowly won Alberta), signalling that the province’s Tories wanted a more radical political opponent to Justin Trudeau, rather than a leader who merely carries on Harper’s policy book with a dimpled smile.

On Saturday, Scheer and his wife are bagpiped into the fundraiser tent, with 540 attendees. Harper used to draw a crowd of nearly 1,000 when he was PM, and 700 last year when he bid adieu and interim leader Rona Ambrose was the speaker (to Scheer’s presumable relief, Harper doesn’t attend). Media interest has plunged still further—though it’s one of the new Opposition leader’s first major speeches. Foothills MP John Barlow, the only Calgary-area MP who endorsed Scheer’s campaign, praises the leader’s “positive attitude, an aspirational message that will excite and rejuvenate Canadians.”

RELATED: In the Khadr settlement, the Conservatives find their fight

In his first big address to Calgarians, Scheer acknowledges the challenge Conservatives will have repainting the map blue in 2019–something that holds true even in Alberta, with two Liberal seats in Calgary for the first time in a half-century. Aside from a few light jokes about hailing from Saskatchewan, he does little to acquaint crowd members with himself or his new approach; instead, he reintroduces them to Harper’s rhetoric about Albertans working hard to harvest crops before first frost, and yank fossil fuels from the ground, and become the country’s economic engine and envy of all. While most everyone else blames moribund oil prices for Alberta’s less enviable current position, Scheer credits “governments here in Edmonton and Ottawa who seem almost determined to destroy the industries.” (This is the only knock on Notley he offers Saturday, showing remarkable restraint for a visiting conservative politician.) His first standing ovation comes when he questions why pipeline protestors don’t chain themselves to the tankers of foreign oil bound for the St. Lawrence seaway; then he gets a couple more for denouncing the Khadr settlement: “I believe that the very fact that Omar Khadr is living free in Canada is compensation enough for whatever happened.”

Though he uses many similar flourishes, and ends on the familiar trope that casts the party as small-business-owning Joes versus big-government elites, Scheer lacks the skill Harper had at turning his applause lines into stabbing thrusts that could turn standing ovations into sustained, leap-to-your feet ones. Then again, Harper didn’t do that Harper thing at first, either–the introverted politician channeled his inner rage and studiously developed his way into the role. Scheer might be able to find that jam as well, though some crowds will be less patient with his discovery phase than others. Two Stampedes from now, he’ll be on the brink of his first campaign as leader.

Calgary Conservatives seem generally content with Scheer, if not enthusiastic. Still, when disdain for Trudeau is such a unifying force—especially in a province steeped in resentment for that political surname—the great galvanizing influence of the party doesn’t have to be its leader.