Everything the Prime Minister does, he does for you. Especially winning elections. 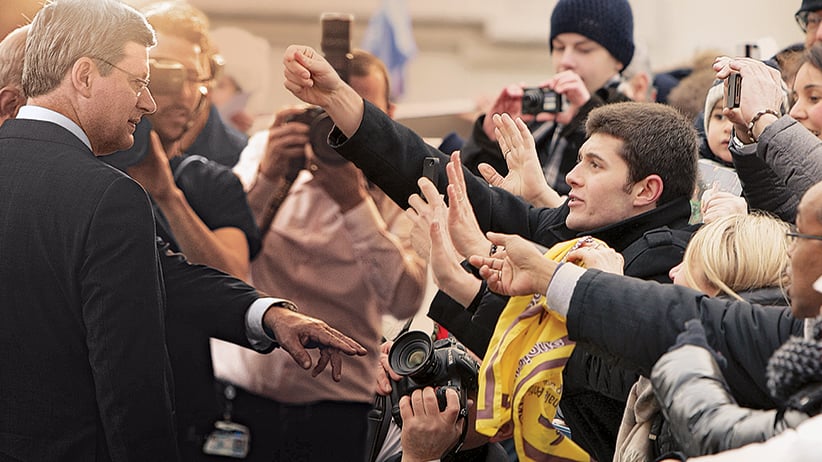 The Conservative party has launched a new fundraising campaign as part of a strategy to win next year’s federal election. Let’s read between the lines of the online appeal from its executive director, Dimitri Soudas. His words are in bold.

We need to win another majority government.

Whoa! Easy, tiger. Where’s the romance, the sweet talk? As strategies go, this is a bit like getting all dressed up, going out to a nightclub and loudly announcing to the first girl you see at the bar: “I NEED A WIFE!”

It won’t be easy; the road to 2015 will be difficult. But this isn’t about Stephen Harper or the Conservative party—it’s about our future.

It’s not like Stephen Harper is doing this “PM thing” for himself. It’s not as though he enjoys it. Why, if he had his way, he’d be livin’ a simpler life down Pincher Creek way, sittin’ on a porch and a-whittlin’ away alongside his old dog Zeke. He wouldn’t have much use for politickin’, nor, evidently, for the letter g.

For you, he is willing to abandon his fundamental principles and stack institutions, agencies and court benches with his loyal supporters and flunkies.

For you, he is willing to change the Elections Act to make it harder for you to vote and easier for you to give him money.

For you, he is willing to spend tens of millions of your dollars on ads to tell you what a good job he’s doing managing your money.

It’s about you. Your family. Your kids. Your grandkids.

It’s about your nephew. Your nephew’s cat. That cat’s grandkittens. It’s about ensuring that your own futuristic clone does not emerge from its slime pod into a dystopian hellscape wrought by an epidemic of post-Trudeau shirtlessness and doobie-smoking.

If you think about it, no one has gotten more domestic political mileage out of the stagnant global economy than Stephen Harper. He should send Europe a fruit basket.

Think about that. Think about how traumatic it would be to lose everything we’ve accomplished together over the past eight years. Stephen Harper appointed to the Senate a man who is now the daytime manager of an Ottawa strip club. And you want to just turn your back on that kind of progress?

Not convinced? Think of everything else we’ve accomplished together: The public servants we’ve muzzled together. The forced smiles we’ve tolerated together. The unconvincing rhetorical use of “together” we’ve endured together.

Voters are faced with a choice between Stephen Harper’s strong stable leadership and Justin Trudeau’s lack of judgment and experience.

Way to go, Dimitri. You just made Thomas Mulcair sad.

The stakes have never been higher. That’s why I’m asking you to take part in our “Road to 2015” campaign.

Will you add your name to our list of supporters and join the fight in 2015?

Andrew Coyne recently described our approach to government as being grounded in “secrecy, deception and brute force.” He left out pettiness, vengeance, patronage, yelling and gazebos, but the point is nevertheless clear: When you donate to the Conservative party, you get what you pay for.