Ottawa's pot penthouse in the sky

The 'magical' place where investors, bureaucrats and pot gurus gather to talk about the evolving marijuana business 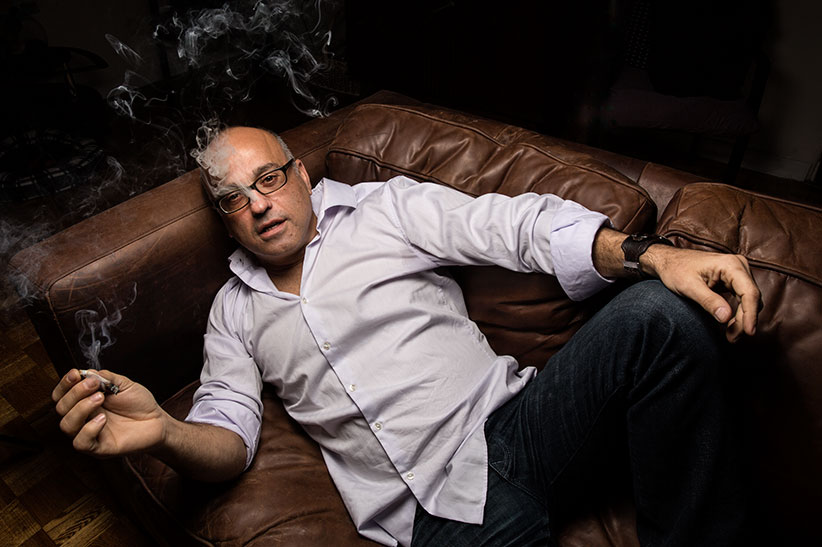 A white bowl displays a sealed can of tomato soup; a glass bowl cradles purple Lego. In the ceiling, a single playing card protrudes from the plaster, as if someone flung up a Queen of Hearts like a knife.

The suite smells of wood and weed, with disorientating whiffs of what-is-going-on?

“This is a vortex,” says Alex Abellan, the president of Chakra Cannabis, founder of National Access Cannabis (NAC),  and tenant of the penthouse atop the Tiffany Apartments in downtown Ottawa. “We were going to call it The Eagle’s Nest,” he says. “This is in the middle of the city, and it’s on the ninth floor, and it’s the beginning and end of everything, and it’s magical.”

As provinces announce their cannabis distribution models, private players are strategizing how to stay in the game. Ontario, Quebec and the Maritimes have already said they’ll create government monopolies, and pot business people see their opportunity to lead the marijuana retail industry slipping away.

Abellan hosts meetings between angel investors, bureaucrats, tech innovators and fellow pot gurus who want footholds in Western Canada and Newfoundland, and as they cling to their shot at becoming the largest legal pot industry in the world, their unofficial headquarters are a three-bedroom pad with an enchanting closet and the décor of a castle on cloud nine.

“There’s a story about this floor, that it was written in an Ian Fleming novel,” says Abellan, who moved into the apartment two years ago. In addition to leading Chakra Cannabis, he is an NAC ambassador and minor shareholder in that company, but has no formal role in NAC. The apartment wraps around the building’s staircase such that, in the private laundry room, Abellan as James Bond can spy on whoever might be at the suite’s door through a covert peephole.

READ MORE: If you’ve ever smoked marijuana, beware of the U.S. border

“It’s one of those places where it’s going 24-7, and you never know who’s going to drop in,” says Mark Goliger, CEO of National Access Cannabis, which operates 11 medical marijuana clinics between Charlottetown and Vancouver. “I’ve been there when there’s been people from the Senate office, and people from, I’ll say, the less-than-reputable market,” adds Goliger, noting he has only visited twice briefly.

Recent guests, Goliger says, include investors who contributed to the start-up of Facebook, tech entrepreneurs and clinicians from NAC—“who end up in that apartment until who knows what wee hours of the early morning, talking about the industry.”

Abellan doesn’t grow cannabis in the apartment, though he keeps other potted flowers, and he distorts the smell of smoked joints by burning incense in the living room that glows with holiday lights. (When questioned about the card wedged into the ceiling: “All I can tell you is, the Queen of Hearts, she’s magical.”)

The dining table holds an unplugged microphone for the speaker at meetings, but discussions tend to turn visual. “I’ve walked in many times, and the whiteboards are full of information,” says Goliger, “wall-to-wall of whiteboards full of stuff.”

Said “stuff” has been, for example, Abellan’s design for a can that he sees as the key to safe distribution, holding 3.5 grams of weed, which would retail for about $35.

What happens in the penthouse strays from the penthouse, as Abellan and others lobby the provinces. NAC hired a lobbying firm, and had hopes that Ontario would open the door to private marijuana retailers. When premier Kathleen Wynne announced on Sept. 7 a sole government-run regime in Ontario, “it came as an absolute shock to us that such an important province, such an important government, would take such a terrible, terrible approach to retail cannabis distribution,” says Goliger. NAC, which is listed on the TSX Venture Exchange, saw its share price drop to 19 cents on Sept. 12 from 32 cents on Sept. 5. (By mid-December it had risen to 50 cents.)

Quebec still looked promising—until it followed Ontario, in Abellan’s opinion, like lemmings off a cliff. “They came out of nowhere and said, ‘get out of the way, we’re taking recreational,’” Abellan recalls. NAC says it has spent 12 years figuring out how to safely distribute marijuana. “Manitoba’s listened. Alberta’s listened, and I’m sure B.C.’s going to listen, but New Brunswick, for example, they went crown corporation, which makes no sense.” Abellan notes that Ontario will only have one store per 900,000 population and will rely on reaching people by sending pot with postage. “A narcotic through the mail?” Abellan asks. “What the hell are you doing?”

Tucked away in the penthouse is a room with a fireplace and a yoga mat upon a carpet that harbours the aroma of weed. “It’s a sacred room,” says Abellan, “and in that sacred room it has a magic closet that takes you to another place.”

The door of the magic closet is hung with a fur coat and hat that belonged to Abellan’s mother. He pets the coat, recalling how he would curl up with her as a child: “it was like being with mama bear.” The door opens into a hidden stairwell.

From the stairwell, a second door opens into a narcotic Narnia. Abellan smokes weed in this room, where plants, which are not cannabis, spider out of moist pots in a windowed room overlooking the city. One pot grows a gladiolus, Abellan guesses, and another flower blooms on a palm-prickly stem. Wicker fans blow above wicker chairs. He says, “It’s like entering another world.”

The view looks down upon the neighbourhood where Abellan grew up, homeless during his teenage years. Abellan says he now uses this room to smoke cannabis for his mental health. He aims to heal anybody he comes in contact with, fancying himself a “contact philanthropist.” Shelves hold encyclopediae and a smoothie recipe book and novels that offer, he says, “the yang to the ying and the ying to the yang.”

Abellan reiterates the supernaturalism of the penthouse, where he moved from Vancouver after asking a friend to find him the right place to live in Ottawa: “trust me. Just look, and it’ll appear,” he told his friend, and abracadabra, an apartment that aligns with parallels of the Earth significant in Hindu tradition, he says, located on a floor number that symbolizes the beginning and end of manifestation, for just $2,850 per month plus hydro.

But Goliger knows the truth about the residence. “The reality is, Alex is the magic,” says Goliger. “The location happens to be where he rests his head and where people can find him. His personality and enthusiasm and momentum becomes the magnet of the location. Go there when he’s not there. I wouldn’t call it a special place without him.”

CORRECTION, Dec. 18, 2017: An earlier version of this story incorrectly referred to Mark Goliger, CEO of National Access Cannabis (NAC), as a business partner of Alex Abellan. It also stated that Abellan wants to expand NAC into the recreational marijuana market. Abellan is a minority shareholder in NAC and has no role its business decisions.