Pete Buttigieg’s brand is logical, not inspirational—and it seems to work

The young mayor's Christian values, military service and academic bearing got him into the conversation. Will his support hold as the race for the Democratic nomination heats up? 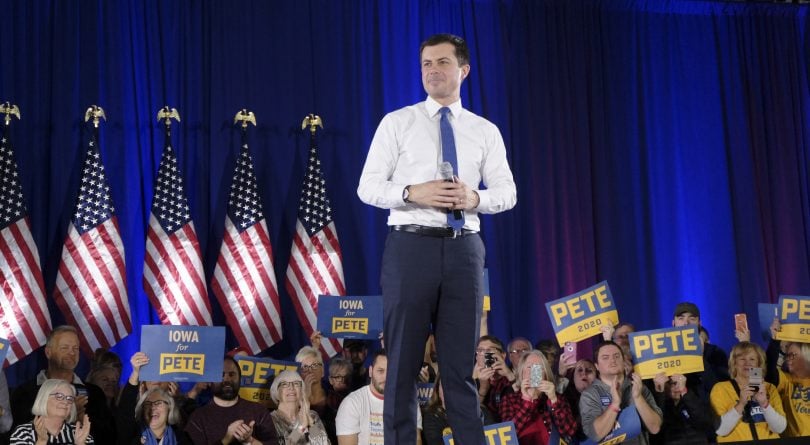 The queue stretches long around Indianola High School, shooting from its red brick gymnasium into the crisp sunshine of the first day of winter. There are 1,200 people waiting—more than the number of students enrolled in this rural Iowa school—and when the doors open, they all cram inside, body odours mingling indistinguishably with the gym’s natural scent. Eager volunteers in bright yellow shirts slap baby-blue “Caucus for Pete” stickers on every chest, while weary media crews set up in the back, cameras aimed at a platform staged with American flags.

Everyone is waiting for Pete Buttigieg, kid-genius presidential candidate for the Democratic party. You likely know the Buttigieg highlight reel: gay, millennial, Midwestern mayor (“Mayor Pete” of South Bend, Ind.), Afghanistan veteran, speaker of six languages, devout Christian, Rhodes Scholar, Harvard graduate. A militaristic moderate committed to realistic climate goals and “Medicare for all who want it,” his pitch is simple: if you like former vice-president Joe Biden, but want someone who’ll be alive in 30 years, vote for Pete. Of the 20-some politicians hoping to oust Donald Trump in November, Buttigieg (pronounced boot-edge-edge, as his campaign swag helpfully informs) reliably polls fourth (behind Biden and the radically progressive senators Bernie Sanders and Elizabeth Warren), with US$50 million and 700,000 contributors backing him—including a smattering of stars.

READ: Elizabeth Warren, once at the back of the pack, is rallying like a contender

“You might be wondering why I’d be up here, telling you how to vote,” Kevin Costner says onstage, dressed in a beige jacket and matching shoes. “I did not fly out to tell you what to do or who to vote for. I came out to tell you who I’m voting for.” Iowans seem to appreciate this nod to their self-determination, and he continues like this, with quiet self-importance and classic flair, for 12 minutes.

“Moral courage speaks with a certain clarity,” Costner says, squinting into the crowd for a dramatic pause. “Listen for it. You’ve heard it throughout history. You know what it sounds like. We know who got it right, and what the echoes would sound like today. It’s our job to listen and not get fooled. See if you don’t hear those echoes this afternoon.”

The Iowans appear to absolutely love this. Outsiders may scoff at the endorsement of a has-been boomer celebrity pontificating like a pompous playwright, but in reality, this whole setup is a masterstroke by Buttigieg’s campaign. Costner shot Field of Dreams here—the literal field is a tourist attraction three hours northeast of Indianola—and he conjures a bygone America by recalling the values and optimism of Kennedy-era politics.

When Buttigieg takes the stage, he speaks the same way, putting on what can only be described as his “presidential voice,” with hints of Barack Obama’s lilting emphasis, pausing to punctuate words like “country,” “faith,” “constitution” and “heart.” He begins his stump speech by asking audiences to picture “what it’s gonna be like when the sun comes up over the United States of America and Donald Trump is no longer in the Oval Office.” The folksy framework appeals to Midwestern sensibilities. Sun’s gonna be coming up, Buttigieg says, in a climate on the brink of catastrophe. Sun’s coming up in a country rife with school shootings. Sun’s coming up in an economy where the world’s biggest corporations pay zero in federal taxes. Each line, ticking topical boxes the way his resumé ticks presidential ones, earns applause.

READ: Americans will elect a woman. They just think they won’t

Perhaps unsurprisingly, Buttigieg was, according to numerous polls, leading the race in Iowa in late 2019. (As of Jan. 14, he was locked in a three-way battle in the state, trailing the frontrunner Biden by just two points.) In September, his campaign hired nearly 100 new staffers and opened 20 offices across the Hawkeye State and, according to FiveThirtyEight, between Sept. 7 and Nov. 18, his campaign aired 3,841 TV spots there at an estimated cost of $2.1 million.

Iowa is fertile ground for Buttigieg’s brand of faith-based, values-oriented, tempered progress. Its land is 92 per cent farm; its people are 90 per cent white and mostly Christian. For over 100 years, Iowans consistently voted for Republican presidents, but since the farm crisis of the 1980s, when a recession caused a 100,000-person exodus, they supported Bill Clinton and Obama before swinging to Trump in 2016. If Democrats win here in 2020, they can thank Trump’s trade war against China (the country slapped 25 per cent tariffs on U.S. soybeans in 2018, one of Iowa’s most popular crops), as well as the collapse of several local ethanol plants, the devastating effects of climate change on agriculture and the state’s ballooning Latino population.

Onstage, Buttigieg references many of these hyper-local issues, hoping to emulate the first candidate who grasped the importance of Iowan retail politics: Jimmy Carter. After the Democratic National Convention rejigged the party’s nomination process in 1968, Iowa, with its complicated caucus system, wound up first. (In 2020, the date is Feb. 3.) Carter, a little-known Georgia governor, “had neither the money nor the name recognition to launch a viable national campaign for the presidency in 1976,” writes Rachel Paine Caufield in The Iowa Caucus. “To remedy these deficiencies, he opted to focus on Iowa as a springboard, hoping to outperform other candidates and draw media attention to his campaign.” Months later, he was elected president.

Now, every four years, the state turns into a political music festival. Raygun, a retail shop on a busy corner in downtown Des Moines, leaned into the hype in 2015, printing shirts with slogans featuring digs at journalists: “Sorry to interrupt your meal, but are you alive and have an opinion on the election?”

Registered caucus members fill 1,681 precincts—schools, libraries, community centres—to rally around their candidates. If a candidate does not reach 15 per cent support in the room, that candidate’s supporters can align themselves with another candidate. On and on it goes, for hours, in a process populated by democracy’s truest believers.

“That’s part of Iowans’ responsibility, is to attend events like this and learn what we can about the candidates, so we know who to support come caucus time. We try to take that seriously,” says Joseph LeValley, a former local journalist and health-care executive who saw Buttigieg in that sweaty gym. LeValley hasn’t yet chosen a candidate, but Buttigieg’s moderation appeals to him. “Compromise built America. If you know anything about our history—without compromise, we wouldn’t exist. Jefferson agreed to the financial system in exchange for putting Washington, D.C., in Virginia. They found a path to agreement by giving each party what they wanted.”

Any Mayor Pete supporter will give a similar answer. They’ll use phrases like “level-headed,” “intelligent” and “sensible,” which cut to the heart of the Buttigieg brand: the man is not inspirational. He’s logical.

Buttigieg’s presidential aspirations began early. Once, in his Grade 11 history class, the teacher asked if anyone wanted to be president. He was the only kid to raise his hand.

His zeal led him to Harvard, where he studied history and literature, living next door to a reclusive coder named Mark Zuckerberg, who was then building “TheFacebook.” Buttigieg was the social network’s 287th member. (Zuckerberg, like top executives at Netflix, Nest and Uber, has donated to Mayor Pete’s campaign, cementing Buttigieg’s appeal as a tech-friendly, white, millennial, Silicon Valley darling.)

Buttigieg leapt from Harvard to Oxford to McKinsey & Company, a management and consulting firm, which briefly landed him in Toronto, analyzing grocery prices for Loblaws in 2008. But 12-hour days analyzing spreadsheets didn’t interest him, so he returned to his dream of public service, enlisting in the army and running for mayor of his hometown. In 2011, at 29, he was elected with 74 per cent of the vote, continuing a four-decade-long tradition of South Bend residents electing Democrats by comfortable margins. Over the next few years, he oversaw a citywide revitalization, including plans to revamp the downtown and a crumbling six-storey, 1.3-million-sq.-foot Studebaker plant, which shuttered in 1963.

In 2014, Buttigieg took leave from the mayor’s office when he was deployed to Afghanistan as a Navy intelligence officer, where he disrupted terrorist organizations’ financial flows. He saw no combat, but the threat of violence shook something in him. “Here I am, I’m a grown-ass man, I own a home, I’m the mayor of my city, I’m a military officer, and if I get killed out there, I will go to my grave not knowing what it’s like to be in love,” he told The Daily podcast.

The reason: he’d yet to come out. So in June 2015, while the Supreme Court mulled same-sex marriage and Indiana’s then-governor Mike Pence signed into law an act that arguably empowered businesses to discriminate against LGBTQ people on religious grounds, Mayor Pete penned an op-ed in the South Bend Tribune announcing he was gay. 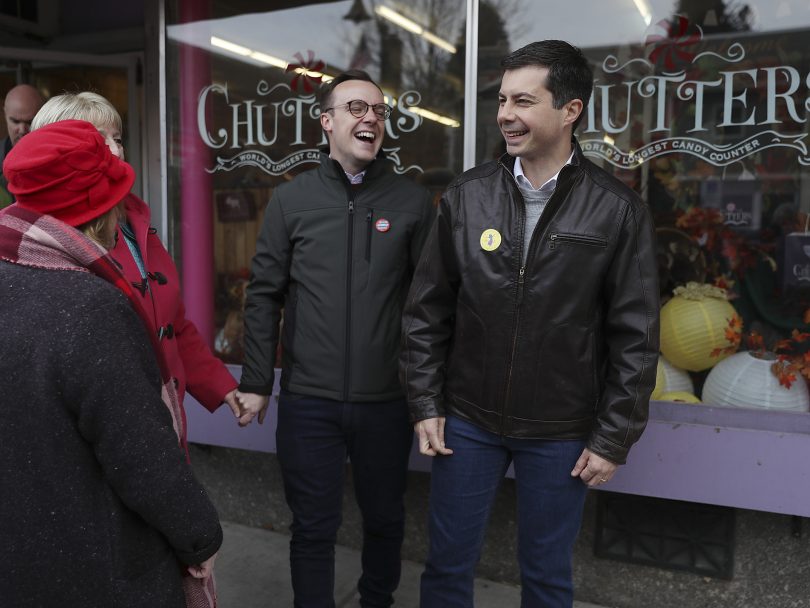 “Putting something this personal on the pages of a newspaper does not come easy. We Midwesterners are instinctively private to begin with, and I’m not used to viewing this as anyone else’s business,” he wrote. “But it’s clear to me that at a moment like this, being more open about it could do some good.” He meant it would do some good for kids afraid of revealing their own sexuality. But the decision also did him some personal good: a 33-year-long haunting secret provided exactly the minority-status leverage needed to propel him from national nobody to viable presidential candidate.

If he is to become President Pete, his journey begins here, in Iowa, where 59 per cent of residents support legalized gay marriage—a jump from 46 per cent in 2011 and noteworthy progress for a Christian-majority state on the older side of the U.S. median.

On Twitter, Michael Sayman, a software engineer at Google, concisely summed up Mayor Pete’s appeal: “Buttigieg is what boomers wish millennials were like. Bernie is what millennials wish boomers were like.”

To wit, if Buttigieg wins the nomination, it will not be thanks to his fellow millennials—many of whom view his establishment ties, Christian values and military history with suspicion—but with the support of boomer Democrats, who appreciate those virtues. “He reminds everyone of their favourite grandson,” Sean Bagniewski, the Democratic chair in Polk County, told The New York Times.

After Iowa, he’ll need to win over progressive millennials and visible minorities—a not-impossible task. Of the 1,200 people crowding around Buttigieg that Sunday afternoon, one man stood out: an enthusiastic Muslim Bangladeshi-American named Reza Karim, who lives in Atlanta.

“I’ve been here since ’83—I was safe, I worked hard, I went to school, I did my dues,” he says. “I felt like I had everything.” But lately, things have changed. His teenage daughter gets bullied for being brown-skinned. He doesn’t feel safe anymore. So, for his 10-day vacation, he hopped in the car and drove 15 hours to knock on doors for Buttigieg in Iowa. “I left my family over there,” he says sheepishly. “They didn’t like it. But I told my daughter, ‘I’m doing it for you.’ ”

Like many Democrats, Karim wants his country to return to normalcy; like many Buttigieg supporters, he believes that path lies in moderation. While camera lights flash on the mayor’s grateful farewell from Indianola, Karim beams from the front row, his chest covered in a bright-yellow volunteer shirt, cheering loudly for his man, the candidate of compromise.

This article appears in print in the February 2020 issue of Maclean’s magazine with the headline, “Mayor Pete’s Iowa.” Subscribe to the monthly print magazine here.