Paul Wells on Pierre Karl Péladeau's historically short, ill-suited leadership of the Parti Québécois, and what comes next 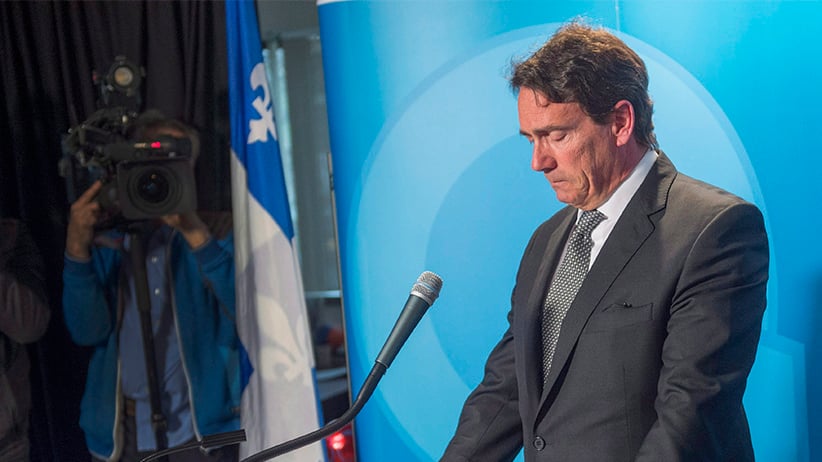 It will be super-interesting to speculate on Pierre Karl Péladeau’s motives for leaving the Parti Québécois leadership and retiring from politics, two weeks short of the first anniversary of his elevation to the party’s top job. But whatever personal motives he might have had, the PQ’s extended existential crisis would surely be reason enough to quit.

Ten days ago a CROP poll put voter support for the PQ at 26 per cent. It has not won more than 40 per cent of the popular vote in a general election since 1998, the only election year in which Lucien Bouchard led the party. The Quebec Liberals also won more than 40 per cent on that night, and have done so three more times since. The PQ’s 25.38 per cent of popular vote in the 2014 election under Pauline Marois’s leadership was, famously, its lowest in 44 years. Under Péladeau, with the bloom rather seriously off the rose of Philippe Couillard’s Liberal government, the PQ remains within a point of that historic-low score.

No elected PQ leader served a shorter time than Péladeau. No elected leader in the party’s history (I’m keeping the distinction between elected and interim leaders) quit before his first general election campaign. Péladeau’s speed record is healthy for the party: His short temper, inept public-speaking style, chaotic office management, delight in collecting and prosecuting grudges, cruelly faulty understanding of Quebec history and politics, spectacularly limited attention span and tabloid-fodder family life made him one of the most ill-suited party leaders I have ever seen in any party in any jurisdiction. The PQ is well rid of him.

From Martin Patriquin: Péladeau exits politics as he arrived—hastily

The surprise is that this was not obvious to the PQ. In fact, this simple and radiant bundle of self-evident facts about Péladeau will continue to elude some members of the party, and we should look forward to hearing, forevermore after each successive PQ shortfall in this or that election or referendum, that “PKP could have done it.” Wishful thinking remains one of the strongest forces in politics. Not only in the PQ. Certainly in the PQ.

I’m not sure what will become of the Institute for Sovereignty Péladeau wanted to set up, on his own dime, to churn out studies designed to prove that Quebec would be better off outside Confederation. I’m not sure who’ll replace Péladeau. Former broadcaster Bernard Drainville, perhaps, whose Charter of Quebec Values helped drive the PQ to spectacular defeat in 2014. Author and former journalist Jean-François Lisée, perhaps, though he seems to have established himself in a brief attempt to compete against Péladeau as every anglophone’s favourite Péquiste. There are young candidates, including Alexandre Cloutier, a former Supreme Court of Canada law clerk who was intergovernmental affairs minister under Pauline Marois.

The next leader, one of these or any other, will be helped by the Couillard government’s spotty record of achievement and the Liberal premier’s difficulty sustaining any emotional bond with voters. That’s the nicest thing I can say about the PQ today.

The party’s nearly two-decade slump in voter support results from serious institutional divisions among parties representing the non-Liberal vote. Some of the PQ vote has gone to the soft-nationalist, centre-right CAQ party. Some has gone to the harder-nationalist, left-wing Québec Solidaire. A lot of the PQ vote simply stays home on election nights. Pierre Karl Péladeau didn’t invent those circumstances and they remain with his departure. The morning after he won the PQ leadership—less than a year ago!—Péladeau woke to find a front-page column by Michel David in Le Devoir calling him the PQ’s last-chance man. Now he’s gone. Who’s next, and which chance will that person represent?