A big part of that plan is 'No more Mr. Mean Guy': stop picking fights and play well with others—including the Prime Minister 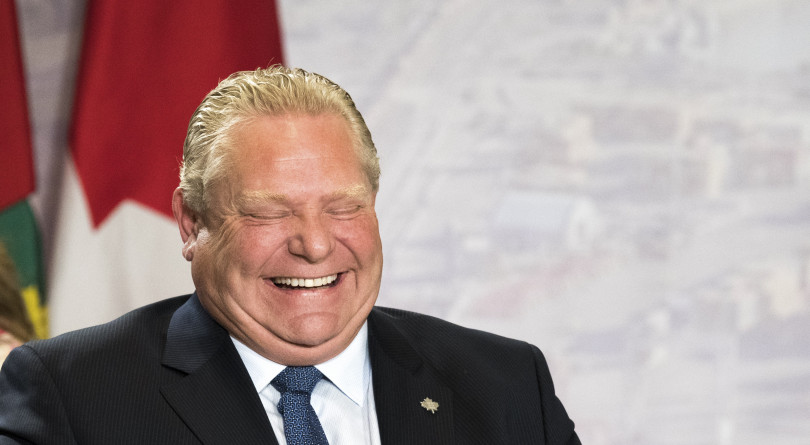 Toronto’s happiest day in many years was not a good day for Doug Ford.

On June 17, when two million basketball fans came out for the Raptors’ victory parade, the throngs of ecstatic people in Nathan Phillips Square cheered for Mayor John Tory and Prime Minister Justin Trudeau but heartily booed the premier when he was announced.

For a politician who sees himself as a man of the people, the boos are said to have come as a personal blow, an obvious, public manifestation of what the polls had been showing for months: his government was at least as unpopular as the one he had replaced a year earlier.

Ford staffers push back at suggestions the booing was a key moment for the premier, saying he took it in stride, but within days the once combative Ford had shifted gears. In rapid succession, Ford shuffled his cabinet and accepted the resignation of chief of staff Dean French, who had alienated caucus members and staffers and repeatedly embarrassed the boss with a number of hard-to-explain scandals.

READ: How to save Doug Ford’s government

French and Ford had looked foolish trying and failing to appoint Ford’s old friend, Ron Taverner, to head the Ontario Provincial Police, leading to a lawsuit with the deputy commissioner and the revelation that Ford had pushed the force to provide him with a fancy touring van, complete with leather seats and a big-screen TV.

French was accused of being too close to lobbyists, too tough on staff and MPPs, and had embarrassed Ford by appointing seemingly unqualified family friends to plum posts in Ontario’s offices in New York and London. French’s departure marked the end of an unusually chaotic and combative period in Ontario politics.

Ford, who had driven out the Liberals after 15 years by promising to cut spending without cutting jobs, seems not to have been prepared for the public reaction to the budget cuts in the first budget, and his government was leaky, disorganized, constantly backtracking and looking foolish in one way or another.

He pushed hard to cut spending, but then repeatedly backed off under complaints that he ought to have expected. The result: he has alienated important constituencies without reducing spending, which has disappointed fiscal conservatives hoping the province would tackle its debt.

“This is a government that was elected on a strong mandate for fiscal responsibility, and they’ve brought spending to a higher level than Kathleen Wynne,” says Jasmine Pickel, Ontario communications director of the Canadian Taxpayers Federation.

People close to Ford say nothing in his previous experience—running a medium-sized label company and serving one term on city council—prepared him for the subtle, difficult job of governing Ontario. The qualities that had served him well previously—his bluff authenticity, his accessibility, his salesman-like way with people—had not scaled up to the job at hand.

“Doug was learning the role,” says one confidante. “He didn’t know what it was to be premier.”

Insiders say that although published polling may not show it, things have turned around, and they have a plan to recover further.

A big part of the recovery plan is: No more Mr. Mean Guy. In his first year in office, Ford was constantly feuding. With members of his caucus, with Toronto City Council, with francophones, parents of autistic children, with former leader Patrick Brown, with Prime Minister Justin Trudeau. “There are real substantive issues that need to be dealt with, so why are you waking up in the morning, like they were in the first year, and saying, who are we going to fight with today?” says one Tory insider.

That has stopped. “We’ve kept him out of fights,” says Kory Teneycke, his campaign manager in 2018 and in the next provincial election. “When you’re out there fighting with everybody, it’s hard to be popular.”

The next step is for the premier to show off his affable side. His team thinks the long-time salesman ought to be able to use his easy way with people to demonstrate to Ontarians that he can work well with other leaders.

Ford is hoping to play Captain Canada, facilitating conversations between other premiers. He has invited them to Toronto on Dec. 2 for a council of the federation meeting. “There’s kind of a moment right now where he can be a bit of a bridge between the West and the other parts of the country,” says Teneycke. “He gets on very well with the premiers of Quebec and Eastern Canada and also with the premiers from the West. He can play a constructive role in that and wants to. So that’s good and interesting.”

The relationship with Trudeau is also key to Ford’s political revival. Their first two meetings were hostile, and Ford frequently attacked Trudeau in his first year in office, acting more like a federal opposition politician than the leader of another level of government.

But in the recent federal election, Ford stayed quiet while Trudeau repeatedly attacked him.

“It was another disservice to Ontarians when during the federal election Ford sat back and let the Prime Minister talk about the cuts he was making, because he is not making cuts,” laments Pickel. “He is spending more than Kathleen Wynne.” But Ford took the shots, held his tongue and after the election he signalled a desire to put the attacks aside and work with Ottawa.

Ford wants federal money for some big infrastructure projects, and to get it he will need to co-operate with Trudeau and Tory. “John Tory and Doug Ford and Justin Trudeau all have a reason to agree on infrastructure spending in the GTA. That will allow some projects that should have happened 20 years ago to proceed, so subways and transportation infrastructure are upgraded,” says Teneycke. “It’s in everyone’s political interest in a way it wasn’t before.”

The conventional wisdom in political circles in Toronto and Ottawa is that Ford will be defeated by the Liberals in the election in June 2022, but there are good reasons to think he can come back, says pollster Shachi Kurl, executive director of the Angus Reid Institute, which tracks the approval ratings of Canadian premiers.

“He has kept his base,” she said in an interview. “He still has 37 per cent approval. On the one hand that sounds dismal, but on the other hand, I’ve seen quarters where a premier with 37 per cent would be at the top of the heap, not the bottom.”

Pollster David Herle, who co-managed three campaigns for former premier Kathleen Wynne, thinks Ford’s personality will scuttle the idea of an image change. “Who are they replacing him with?” he said. “We’ve been watching him his whole life, right? We know what he’s like. I’m very skeptical of that.”

Herle thinks the caucus, looking at likely defeat, may try to force him out. “I hear more Conservatives telling me that Ford will not be the candidate in the next election than that he can turn it around.” Few Tory MPPs credit Ford with getting them elected, and they are said to be worried about their prospects for re-election. The federal results, with Trudeau and Andrew Scheer treating Ford like he was toxic and the Conservatives losing ground, make the caucus nervous.

Even his allies think that it is a possibility that his party could try to dump him through a caucus revolt. “Ontario Tories are only good at two things, losing elections and knifing leaders,” says one Tory insider. “That is their two specialties. They do both with great frequency and there’s a correlation between the two.”

The insiders say the good news for Ford is that there may be a more tempting target in Ottawa.

“I actually think Scheer’s leadership problems make it much less likely, because all the people who like insurrections actually have a fun one they can participate in.”

This article appears in print in the January 2020 issue of Maclean’s magazine with the headline, “No more Mr. Mean Guy.” Subscribe to the monthly print magazine here.