Quebec cracks down on the unvaccinated

Politics Insider for Jan. 12: Erin O'Toole is out of step; lockdowns fall out of favour; and MPs are being warned about Chinese meddling 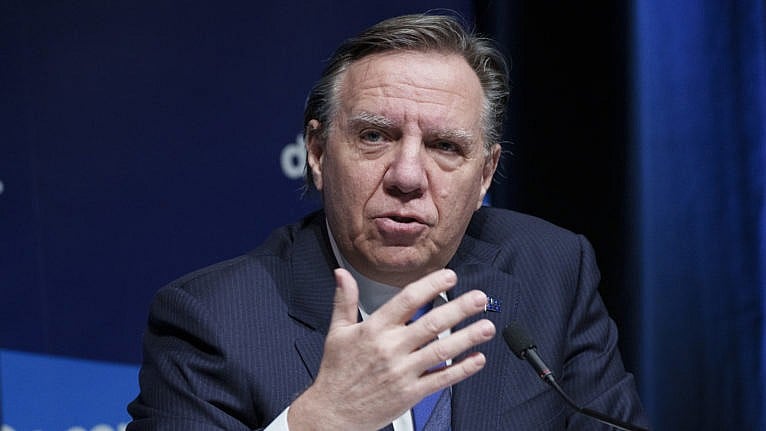 Legault responds to a question during a news conference in Montreal, Jan. 11, 2022. (Paul Chiasson/The Canadian Press)

‘Significant’ penalty: Francois Legault announced Tuesday that unvaxxed Quebecers will have to pay a “significant” financial penalty if they persist in not getting jabbed, CP reports.

About 10 per cent of adult Quebecers aren’t vaccinated, but they represent about half of all patients in intensive care, Legault said, adding that the unvaccinated should be forced to pay for the extra burden they are placing on the health-care system. “I think right now it’s a question of fairness for the 90 per cent of the population who made some sacrifices,” Legault said. “I think we owe them this kind of measure.”

A warning: The penalty could pose a problem for  the vaccine hesitant and those who face systemic barriers, said Black Health Alliance executive director Paul Bailey: “We know that can further undermine public trust in governments or just the confidence in the vaccine, period.” CP has the story.

Time to act: In a vigorous column, Tasha Kheiriddin, in the Post, argues that the unvaccinated must be deterred from harming others.

It’s like saying “wear your seatbelt, but if you don’t, that’s OK.” Well guess what — it’s not. If you get in an accident, it will cost up to three times more to treat you in hospital than if you were buckled up. Sound familiar? The reality is that we restrict plenty of behaviours where we judge the harm to others, including economic harm, outweighs the limits to individual liberty. We don’t allow people to smoke in workplaces or public buildings. We forbid drinking and driving. And we mandate vaccination for contagious diseases such as measles if children are to attend public school.

Wrong tone: In the Globe, Gary Mason writes that Erin O’Toole is out of step with Canadian mood when he sticks up for the unvaxxed, and is likely doing it only to fend off a challenge from the right.

It’s doubtful Mr. O’Toole actually believes what he is saying – he just has little choice but to say it. He has his job to worry about and that job is leading a fractious caucus that includes a strident wing of freedom fighters who believe Canadians should not have their rights and liberties “trampled on” by government, regardless of circumstance. Even if that causes a crisis in our health care system.

Mulcair agrees: Writing for CTV, Tom Mulcair makes a similar point, saying that Trudeau, who is emulating Emmanuel Macron’s tough approach to the unvaxxed, is on the right side of public opinion, unlike O’Toole.

There’s nothing more important for a political leader than the public’s perception of you. It’s not something you get to change with a black T-shirt. If people feel that you’re irresponsible, that their protection is not your number one concern, that sticks. O’Toole is not irresponsible. He’s just playing a reckless game and he’ll wind up paying a huge price for it in terms of his own credibility.

Not so fast: Don Martin, also writing for CTV, has a different view, arguing that the privacy implications alone make the Quebec proposal untenable, and with any luck, Omicron will herald the end of the worst of the pandemic.

It’s one thing to mandate vaccinations in teaching or transportation occupations which interact with the public, but a lot more different and more difficult to confront an unvaccinated home-office worker or force a mentally ill person to face a hearing on why they shouldn’t be fined. Above all else, the current number of Omicron variant cases clearly points to this month as a viral supernova event, one that is now flaring into a medical monstrosity before it will likely collapse into a sniffling cinder by summer.

Lockdown support: A new Leger polls finds a slim majority of Canadians support the latest round of lockdowns, CP reports. Fifty-six per cent of respondents agreed governments are making the right decisions. Another 31 per cent said they did not believe Omicron poses a serious health risk.

Adieu, Dr. Arruda: La Presse has two thoughtful columns on yesterday’s resignation of Dr. Horacio Arruda, one from Isabelle Hachey (translation), one from Patrick Lagacé (translation). Both of them think it was maybe a good idea for him to move on.

Mounties get black eye: The federal court ruled Tuesday that RCMP Commissioner Brenda Lucki violated her obligation under the law by taking too long to respond to investigations into claims of Mountie misconduct, CBC reports.

The Federal Court case started back in early 2014, when the B.C. Civil Liberties Association (BCCLA) lodged a complaint with the CRCC — the watchdog agency tasked with reviewing public complaints against the RCMP — alleging Mounties were spying on Indigenous and environmental protesters opposed to the Northern Gateway pipeline project. The CRCC’s findings, which pointed to gaps in the RCMP’s surveillance policies, were released only in late 2020. The Federal Court case pivoted to look at what’s meant by the part of the RCMP Act that says the commissioner must respond to CRCC reports “as soon as feasible.”

CSIS warns MPs: CSIS is warning individual MPs and senators about influence operations being carried out by China and other adversarial states, the Globe reports.

Conservative foreign affairs critic Michael Chong said CSIS officials warned him in a briefing about subversive and coercive foreign interference operations that take place on Canadian soil, including efforts to influence MPs. “It certainly was in reference to China,” he said. However, the MP noted the officials also discussed threats from Iran after he raised concerns. They also told him to be aware of how China uses proxies or business lobbyists.

PHAC probed: Canada’s privacy watchdog is probing federal officials’ use of “de-identified” cellphone location data after the revelation raised concerns with privacy advocates and opposition politicians, who have forced an emergency Commons committee meeting on the issue, Global reports.

Not transparent: PHAC might have avoided the problem if the agency had disclosed what it was up to, writes Campbell Clark in the Globe.

Payette keeps snowflake: Julie Payette won’t lose her appointment to the Order of Canada, CBC reports. An advisory council chaired by Supreme Court Chief Justice Richard Wagner “has concluded that there are insufficient grounds to proceed further at this time.”