Perversely, they add legitimacy to the government's argument for a special law to end the strike 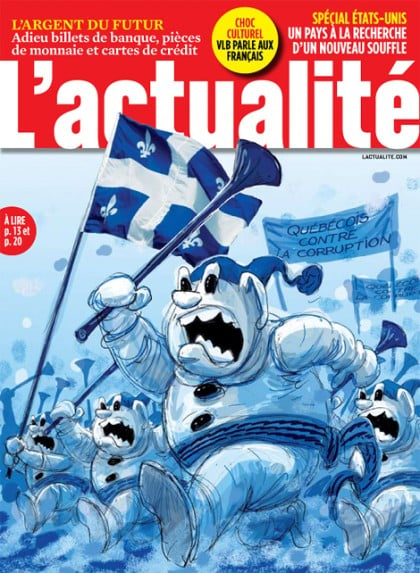 At last, it's come true!

About a year and a half ago, sister mag L’Actualité published a rebuttal issue to our fun and frameable Bonhomme cover entitled Quebec: The Most Corrupt Province In Canada. Their cover picture depicted a pack of righteously outraged Bonhommes armed with (I think) vuvuzelas, marching in the street against corruption. The idea, of course, was that Quebecers were furious with corruption-addled Liberal government, and weren’t going to take it anymore.

I thought it was a neat-o picture. My friend/colleague Patrick Lagacé, not so much. “Bah,” he said when he saw the cover. “Quebecers don’t protest in the streets unless it’s over a hockey team.”

And yet, he’s right, isn’t he? Despite being in power for nearly 10 years, most of which in the doldrums of public opinion, there has been no large-scale, grassroots protest against the Charest government. This is even more incredible given the numerous scandals (here, here, here and most recently here, for starters) over the last three or so years.

In fact, far from protesting the government, Quebecers keep re-electing it to office: Jean Charest’s Liberals are the only government since Duplessis to win three consecutive terms. If, as the polls suggest, Quebecers aren’t happy with the Charest government, they certainly haven’t done much about it. Meanwhile, the only blue march we’ve seen was a festive affair to (playfully) cajole the NHL into anointing Quebec City with a hockey team. Several thousands attended. And yes, there were plenty of vuvuzelas.

Which brings us to the current protest over tuition fees waging in the streets, Metros and, in an exceptionally unclassy episode today, in the classrooms of the province. I’m not sure when, exactly, it happened, but at some point the scope of the strike became larger even as those remaining on the street diminished. It’s at the point where CLASSE, the more radical of the four groups representing striking students, had its legitimacy challenged by Force étudiante critique, which counts among its members at least one of the alleged Metro smoke bombers.

The anti-capitalist group known as CLAC has incorporated “the fighting students” into its ranks of  “radical feminists”, “anti-capitalists, anarchists, communists” and “those who are pissed off, and are at the end of their rope.” There are huge problems with their tactics and their rhetoric, but it remains that those students (and many non-students, surely) are the only ones to wear their discontent with the current government on their sleeve. Everyone else has stayed on the couch.

Of course, their boorish tactics and yawn-inducing nihilist spiel have only alienated these noyau dur protesters from a population that might otherwise feel a certain kinship to their cause. They aren’t humanitarians, freedom fighters or anything approaching such romantic connotations. At best, they are discontents; at their worst, thugs. Perversely, they add legitimacy to the government’s argument for a special law to end the strike. Yet there isn’t an ounce of apathy to their cause. The same can’t be said for the people watching them.

There is a much better outlet for their energies: work to vote the bums out. There are two political parties that at the very least support the broad strokes of the student movement. One of them, the Parti Québécois, stands a good chance of forming the next government—and its MNAs wear the red square on their lapels! Both these parties—the other is Québec solidaire—have histories of advocating broad social change, and together occupy a huge chunk of Quebec’s left political flank. Conveniently enough, there has to be an election within the next year and a half.

Marois and company, who know a thing or three about electoral pandering, need to be held to account on their pro-student rhetoric; meanwhile, Québec solidaire needs to elect more than one MNA. The low voter turnout, fueled largely by younger people staying home on election day, only helps the incumbent Liberals.

But no. There are injunctions to break, and windows that need smashing.