Has Erin O'Toole fixed his government's problem with veterans?

Your daily dose of political theatre.

Maclean’s is your home for the daily political theatre that is question period. If you’ve never watched, check out our primer. Today, QP runs from 2:15 p.m. until just past 3. We livestream and liveblog all the action.

Erin O’Toole is the kind of veterans affairs minister who, when his opponents doubt his wisdom during question period, uses his brain when he rises to respond. That sets O’Toole apart from his predecessor in the role. Today, he went so far as to cite a committee report—my god!—as he defended a budget measure aimed at veterans.

The moment followed a question from, no one will be surprised to learn, Peter Stoffer—the warhorse New Democrat who’s criticized government handling of veterans longer than most of his colleagues have sat in the House. “Mr. Speaker, a quick trip to the Memorial Chamber and you will understand the phrase that ‘growing old is a privilege denied to so many,’ yet on page 274 of the budget, the veteran Marc will make $62,000, but when he turns 65 will go down to $27,000. Yet their budget increases that to $43,000,” said Stoffer.

Admittedly, he’s delivered preambles more smoothly in his time. But take a look at page 274 of yesterday’s budget document. A graphic explains the logic behind the government’s proposed Retirement Income Security benefit, aimed at “moderately to severely disabled veterans who receive income replacement under the Earnings Loss Benefit or the Service Income Security Insurance Plan.” The fictional Marc, who earned $62,000 in his normal working life, would normally fall to $27,000 when he reached 65 years of age. The Tory plan recoups some of that lost income. 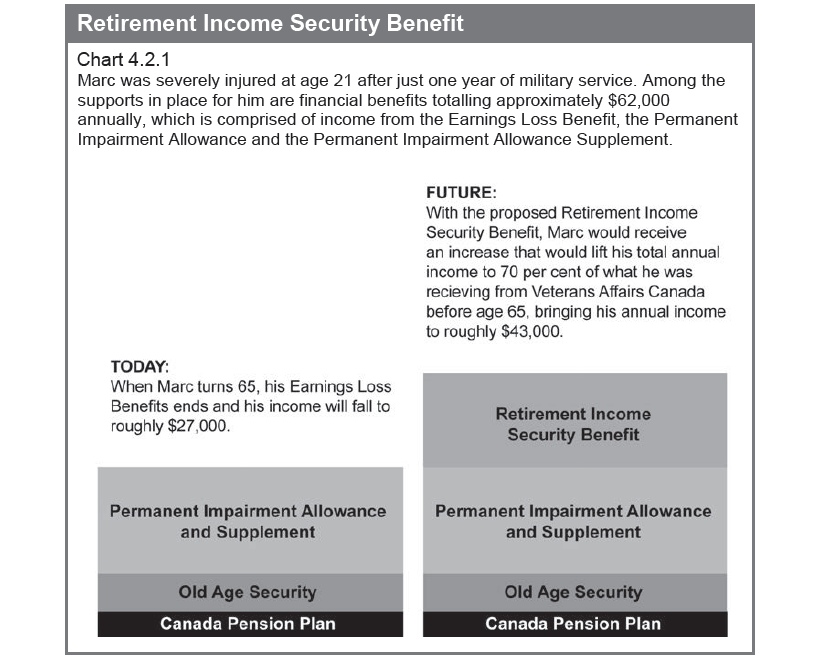 Stoffer remained unimpressed with Marc’s plight. “Why is it that when veterans turn 65 years old, they still lose money under this Conservative government?” he asked.

O’Toole responded by reaching way back to a veterans affairs committee report from June 2014. The New Veterans Charter: Moving Forward dropped a ton of recommendations in the government’s lap, and O’Toole referenced the third of the bunch this afternoon:

That the most seriously disabled veterans receive financial benefits for life, of which an appropriate portion should be transferable to their spouse in the event of death, that Veterans Affairs Canada consider the use of a probable earnings approach in determining the amount of the benefits, and include better access to the three grades of the permanent impairment allowance, for which eligibility criteria must be clarified.

The committee report recalls the testimony of veterans’ ombudsman Guy Parent, whose office undertook a study that revealed a lack of income for 65-year-old vets.

“In our report, we identified that 53% of individuals who are totally and permanently incapacitated do not receive impairment allowances. Veterans Affairs Canada has a definition of an individual who is totally and permanently incapacitated. It makes no sense that individuals who are designated as such by the department are not receiving permanent impairment allowances, which would guarantee them an income after age 65.”

The government’s response agreed “with the spirit and intent” of the committee’s recommendation, but noted that “interdepartmental, fiscal and legal implications” meant the proposal required “further due diligence.”

Presumably, the new RISP and the graphic that explains it are the result of that due diligence. The program aims to ensure that veterans’ income never falls below 70 per cent of the under-65 income. Stoffer apparently wants more money in vets’ pockets. This argument is all about the details. With the last minister in the portfolio, arguments were never about details. They were about arguably massive cuts and possibly harmful office closures.

O’Toole is the kind of guy who gets to know committee reports. Veterans affairs is now the least of the government’s headaches.

So much gets lost on budget day, what with all the talk of Family Tax Cuts and Registered Retirement Income Funds and depleted contingency funds and increased escalators for defence spending. The billion-dollar items in Finance Minister Joe Oliver’s first budget, his government’s massive pitch to voters ahead of the next election, squeeze out the truly important measures that are the cherry on top of Oliver’s plan to “make the greatest country in the world … even greater.”

Think of the government’s commitment, so passionately expressed, to extend Canada’s commitment to the International Space Station, that playground in the sky that made Chris Hadfield a household name and a Twitter superstar. These Conservatives, who hope to form another government later this year, boast that Canada is a “trusted and sought-after partner” at the station and “among the top space-faring nations” on Earth.

The government is so enthused about entering orbit that it will boldly go to, well, Houston and “engage with the National Aeronautics and Space Administration to define the terms of this continued participation.” No money’s attached to the promise, because whatever scientific and technological barriers might be shattered way up high, you have a tax cut to savour.

Barriers make the government’s skin crawl, especially when trade is involved. “Persistent barriers to internal trade fragment our economy,” the budget reads, way down on page 207. “They restrict opportunities for Canadian firms to grow and compete, limit access to jobs for workers and increase costs to consumers.” Last year, the provinces expressed some desire to “modernize” the Agreement on Internal Trade, a fraught, sensitive set of rules meant to liberalize trade between provinces. Industry Minister James Moore has repeatedly made it clear that things simply must change, and his department produced a comprehensive report that backed him up. The government’s latest robust pledge on the file? A brand new Internal Trade Promotion Office at Industry Canada, born with no clear price tag but adds a layer of bureaucracy to a government that can’t stand bureaucracy.

Space doesn’t win elections, and internal trade puts most people to sleep. But for every budget item there is a constituency on which votes or endorsements or some corner of public opinion turns, turns, turns. Any goodie helps, even on the cheap.