Small business owners ought to be so jazzed about this election year. Big business is poison in the House of Commons, the little guy is everybody’s favourite, and every argument about whose plan is worst only amplifies the importance of, for example, the 109,000 owners represented by the Canadian Federation of Independent Business. Today, those folks’ ears were burning off the top of question period.

Thomas Mulcair recalled his own party’s proposal to cut the country’s small business rate from 11 per cent to 10 per cent and, eventually, nine per cent. That plan came to a vote on Feb. 5, and both the Tories and the Liberals voted against it. New Democrats surely counted on that outcome. Today, two days after Finance Minister Joe Oliver tabled a budget that pitched the same measure, phased in over four years, Mulcair pounced.

Jobs Minister Pierre Poilievre dug out a metaphor to express his wonderment that the NDP would “take credit” for such a tax cut. “The NDP Leader is kind of like the rooster who crowed when the sun came up, and therefore thinks that he made the sun come up,” said Poilievre, who explained that his tax cut—not the NDP’s, remember—is the biggest tax cut in more than two decades. The tussle over who thought of what measure first resembles a perpetual motion machine, neither side willing to admit the same idea has any virtue across the aisle.

To fully understand the complex logic adopted by politicians who oppose attractive proposals, we must revisit the debate on the NDP’s February motion. For the record, the motion read as follows:

That the House call on the government to take immediate action to build a balanced economy, support the middle class and encourage manufacturing and small business job creation by: (a) extending the accelerated capital cost allowance by two years; (b) reducing the small business income tax rate from 11% to 10% immediately, and then to 9% when finances permit; and (c) introducing an Innovation Tax Credit to support investment in machinery, equipment and property to further innovation and increase productivity.

Recall that all three of those proposals appeared, at least in some form, in Oliver’s budget. This year’s plan extended the accelerated capital cost allowance, which allows companies to write off machinery and equipment before it depreciates fully, for another decade; pledged that small-biz tax reduction; and proposed a five-year, $100-million program to spur innovation in auto parts—not a tax credit, but still money headed for prized manufacturers.

What is most surprising about the motion is not the New Democrats’ bald attempt to reinvent themselves as born-again capitalists, but their audacity in trying to take ownership of some policies that we have already introduced and that they voted against. The member for Skeena—Bulkley Valley even had the audacity to say that the so-called new NDP measures were proven to be successful. They were proven because we introduced them.

In sum: Saxton recognized the motion’s merits, took credit for the success of the policies on the table, concluded that voting against the proposals was the most logical course of action, and will now presumably vote for a budget plan that includes variations of the same ideas.

A few minutes later, Liberal MP Scott Brison complicated matters somewhat. He revealed to the House that, as the government and official opposition argued about who believes more in a small-business tax cut, a left-leaning and a right-leaning economist had separately dismissed such a tax measure as a gift to the wealthy.

Brison also quoted Jack Mintz, the right-leaning of the economists, saying a tax cut for small businesses often helps wealthier Canadians who own Canadian-controlled private corporations split their income. Brison could only reach one conclusion: “The coalition that has emerged between the Conservatives and the NDP around income splitting to benefit Canada’s wealthiest families is something the Liberals are watching with amazement.”

Everyone’s a champion. No one’s on the right track. And the happiest person in the land must be Dan Kelly, the CFIB president whose support everybody so desires.

As long as governments are run by elected politicians, those governments will suck up to voters, and shamelessly so. Witness the deference to the good families of Canada in Finance Minister Joe Oliver’s budget speech on April 21.

“For generations, Canadian families have understood the path to prosperity: Don’t compromise tomorrow by spending recklessly today. Don’t pile on debt you can’t afford. And invest sensibly for a secure future,” he said, hoping everyone watching would see their own clan in his words. “For governments, the principles are the same. We have been prudent. We have been practical. And we have stuck to our plan.”

Huzzah! A government that follows the example of its heroically responsible electorate. Oliver’s only problem is he’s giving credit where it’s not really due. The finance minister’s claim that families “don’t pile on debt [they] can’t afford” is a bit of a farce, and the punchline lies on page 51 of the budget plan, in a chart that tracks household debt. 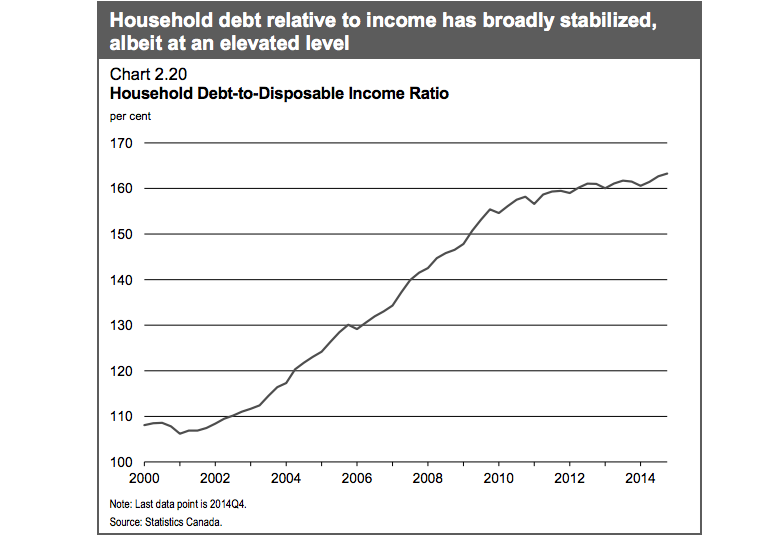 It’s no secret that Canadians are a people who love to accumulate household debt. The chart plainly shows that the average family owes about $1.65 for every dollar it earns. The Finance Department’s analysts acknowledged, and then explained away, the problem with that mounting debt. “Higher debt loads leave the household sector more vulnerable to income shocks or a sudden and sharp increase in interest rates,” the budget’s authors wrote. “However, as households have accumulated debt in a very low interest rate environment, the cost of servicing that debt is at a record low.” In other words: Relax, everyone. You can all afford to live beyond your means.

Never mind that low interest rates aren’t permanent, as the Bank of Canada has warned before. And never mind that former TD Bank CEO Ed Clark effectively called on the government to stop the banks from hurting themselves and further exacerbating an addiction to lending.

Canadian families carry at least two voters, on average, and no matter how much sleep they lose over bills they can’t pay, they’ll always be prudent in the eyes of the people who need their votes. Every citizen of voting age is responsible, trustworthy, and downright brilliant when an election is on.