Rachel Notley and the political company she can’t keep 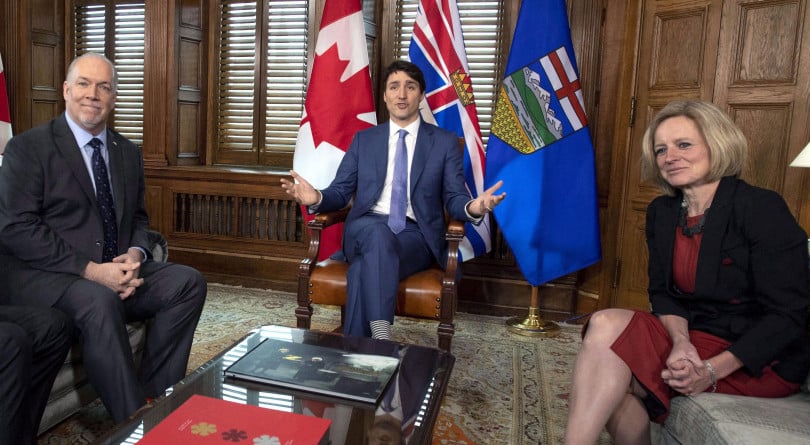 Notley in a hen's-tooth-rare appearance with Trudeau and Horgan, as the three discussed the deadlock over the Trans Mountain pipeline in April 2018. (Justin Tang/CP)

Surely, that’s a secret Notley is entitled to keep between herself and a small slip of paper this fall. But the question, and its political potency in her opponent’s stump speech, speaks to the unusually massive headaches Notley faces in terms of guilt by association. Sometimes, a provincial leaders has to distance herself or himself from a federal leader who’s a local liability. Notley has to shake off ties to two federal leaders.

Despite the structural ties between provincial and federal NDP parties, Notley has never had much to do with Singh—and doesn’t appear to have met him once since he became federal leader 18 months ago. She’s knocked Singh publicly on the pipeline file. But they share the party name and colour. Notley’s links to the Liberal Prime Minister are clearer, having worked collaboratively with him on carbon policy and the Trans Mountain pipeline approval throughout her term. As anti-Trudeau anger boiled over in Alberta over the last year’s pipeline delays and Kinder Morgan’s sale of the project to Ottawa, she’s had to step away. The only time Kenney actually mentions his rival by name—note the “premier” reference in the above quote— is when he refers, in typically sinister tones, to the “Notley-Trudea alliance.” While polls suggest Notley remains about as popular as Kenney does, one of the meanest things you can say about somebody in Alberta today is that they’re tight with Trudeau, a toxic name brand here.

A provincial NDP branch often relies on a large influx of New Democrats from other provinces to bolster their campaign ground troops. There’s precious little of that this year, given the tensions between Alberta NDP and their federal cousins, as well as B.C. Premier John Horgan’s anti-pipeline crew. And federal Liberal MPs in Alberta like Kent Hehr and Natural Resources Minister Amarjeet Sohi recognize the grief they’d cause by endorsing Notley. New Democrats are used to counting on their labour-friendly “brothers and sisters” during elections. Notley is uniquely isolated from the rest of Canada’s progressive political factions.

That sharply contrasts with her rival. Kenney counts conservative allies in premiers’ offices in Saskatchewan, New Brunswick, Manitoba and Ontario, pledging to join them in their carbon tax fight. Andrew Scheer’s federal Conservatives, Kenney’s former blue man group, enjoy 60-per-cent support in Alberta. Its MPs are campaigning to get United Conservative candidates elected, to further the national movement, while Michelle Rempel flew west last week to play the role of Notley at the UCP leader’s pre-debate rehearsals. Kenney can also get the sort of high-profile help Notley cannot—former Saskatchewan premier Brad Wall was a last-minute scratch as a rally “special guest” earlier in the campaign, while Laureen Harper, the former prime minister’s wife, introduced Kenney at a recent event. Scheer will co-headline a UCP rally in Calgary on Thursday. Don’t rule out a final-week cameo by Stephen Harper himself, who Tuesday morning wrote in a UCP fundraising letter that “the next week will be historic for our province. But don’t underestimate the challenge before the United Conservative Party.”

Appearances by Harper and Scheer are a gift to Kenney. Notley can only hope her out-of-province supporters stay quiet.

Rachel Notley will start Day 22 of the campaign testifying by video at a Senate hearing on Bill C-48, the Trudeau government’s ban on oil tankers on B.C.’s north coast. Kenney argues that she was late to the booing game on that legislation, that she was with Justin Trudeau the day he announced the tanker ban was announced and didn’t protest. It’s true—she was busy that day in November 2016 celebrating Trudeau’s cabinet approval of the Trans Mountain pipeline at the same time.

Notley’s big campaign announcement on Monday was a strange one: that she expects Trudeau to grant Trans Mountain’s approval anew next month, following last summer’s dimming of the earlier green light by the Federal Court of Appeal. This seemed based largely on a mixture of hope and conversations with Ottawa. Kenney, whose campaign is based largely on deep distrust of the current government in Ottawa, pledged that on a UCP government’s Day 1 he’d proclaim into law the NDP’s bill that allows the province to “turn off the taps” to limit oil to an anti-pipeline province (read: British Columbia). This would move this nuclear option one administrative step closer to reality, an inflammatory gesture meant to make the B.C. government cower, rather than compromise. It will get angry Albertans excited, but will it work tactically? It’s already provoked the Horgan government’s counter-threat to block it in courts.

Andrew Leach, an energy economist and author of Alberta’s current climate strategy, wonders if Kenney’s victory makes it harder for Trudeau to get to “yes” on Trans Mountain.

Is there any way Trudeau can approve the pipeline if Kenney moves ahead with his promises on emissions policies?  Not if he wants a shred of credibility on the climate change file.  Kenney has pledged a rollback of carbon pricing in Alberta, a lawsuit challenging federal authority to regulate provincial emissions, a removal of the oil sands emissions cap and a halt to the phase out of Alberta coal-fired electricity. That alone will make it very difficult for Trudeau to approve the pipeline. Now imagine that Kenney, as premier of Alberta, is actively campaigning for Trudeau’s opponent in the upcoming federal election when Trudeau faces his decision. The prospects for the Trans Mountain pipeline get even more slim.(Maclean’s)

Advance voting runs Tuesday through Saturday—for information on your nearest voting stations, click here. Elections Alberta is now letting voters cast advance ballots outside of their ridings, a measure that will help boost the popularity of early voting. In 2015, 16 per cent of all Xs were marked in advance, compared with 14 per cent in 2012. Eventually, election day may come to be known mainly as the last day to vote, and when they’re tallied.

Campbell Clark on the climate headache Doug Ford creates for Kenney: “At a closed-door first ministers’ meeting in December, Mr. Ford attacked Mr. Trudeau for setting a climate-change policy that assumes Ontario must do more than other provinces. Mr. Trudeau shot back that Mr. Ford’s position would mean shutting down the oil sands. As it happens, if Alberta were to make a 30-per-cent cut from 2005 levels, it really would be roughly the equivalent of shutting down the oil sands.” (Globe and Mail)

Kieran Leavitt on yet another candidate with deeply socially regressive views: “Another United Conservative election candidate is under fire for once suggesting that a Christian couldn’t support a government that endorses gay marriage, abortion, and the minimum wage — because they’re not biblical. Martin Long, the UCP candidate running in West Yellowhead, commented on a Facebook post in 2016 that questioned supporting a government that endorses these things.” (The Star Edmonton)

Justin Giovannetti on Rachel Notley’s brand of Tim Horton’s socialism: “Over her time in office, she has linked her party’s Prairie pragmatism with support for the oil industry – breaking most ties with the federal NDP in the process. Her brand of Tim Hortons socialism, focused on the blue-collar jobs created by pipelines and oil refineries, finds few friends in Toronto or Montreal. Once one of the federal party’s best fundraisers, she hasn’t made a call for the federal New Democrats since the party showed up for a 2016 conference in Edmonton and debated supporting a far-reaching document known as the Leap Manifesto, which calls for an end to the use of fossil fuels.” (Globe and Mail)

Keith Gerein on a pipe of empty promises: “Yet it’s quite a gamble for the NDP leader to now tell Albertans she has confidence in the reliability of a federal Liberal government whose standing in this province is about as bad as it’s ever been. The approach seems to play right into the “Notley-Trudeau alliance” attacks Kenney has been pushing repeatedly during the campaign. Not that Kenney is offering anything better in terms of policy.” (Edmonton Journal)

Sarah Rieger with a carbon tax reality check: “UCP Edmonton-West Henday candidate Nicole Williams tweeted last week the average family would save up to $1,150 a year. It was a claim Kenney repeated during the leaders’ debate. But Tombe says that’s pretty deceptive unless you’ve mixed up the average family with the One Per Cent. Just 1.2 per cent of households spent more than $1,000 due to the tax. ‘That is very misleading…. If you look at the full, overall average across households, you see that costs are nowhere near $1,150. That’s really the outlier, very top-end estimate, for very high-income households,’ Tombe says.” (CBC)