Relax, Doug Ford will be fine

Jen Gerson: Ford can be clumsy and ignorant, and it's unclear exactly how he'll slash Ontario's deficit. But how much worse is he than the status quo? 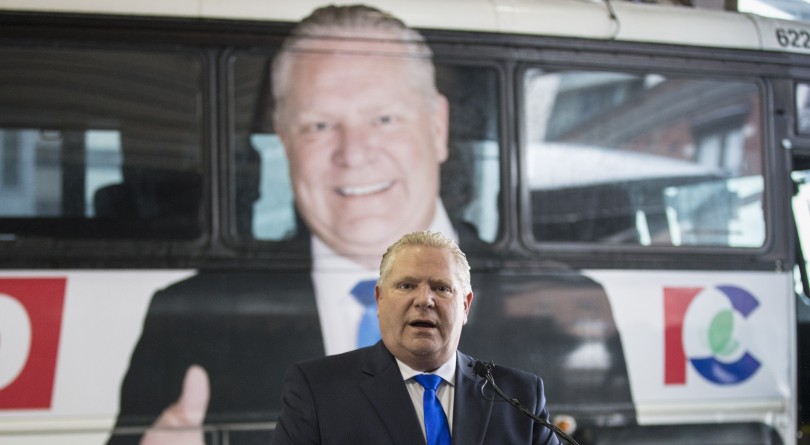 If one is even a moderately fiscally conservative Ontario voter, the prospect of spending billions more in an already heavily indebted province, or rewarding the long-governing Liberals with another term is untenable. I don’t envy the Ontario voter. Ford would not have been my first pick for Progressive Conservative leader. But given these options, the idea of Premier Ford demands serious consideration. The logic must bear itself out to the bitter end.

To believe current Liberal Premier Kathleen Wynne, Ford “believes in an ugly, vicious brand of politics that traffics in smears and lies.”
She recently went on the offensive, offering interviews to local Toronto media and Twitter essays highlighting the failings of her would-be successor, and drawing allusions to U.S. President Donald Trump.

Wynne noted Ford’s most recent transgression: “how I and other people on my team should be in jail and I don’t think that kind of comment can be (allowed) to stand,” she said on the CBC. “The implication was that I should be in jail and it was very reminiscent of ‘lock her up’ kind of language.”

Well, Ford promised to bring in an outside auditor to examine the Liberals’ books if elected. He later doubled down on that position, calling for an inquiry in addition to the independent auditor. He noted, correctly, that the Liberals have been oft-chastised by the auditor general. And further, that the party’s top officials have been found guilty of a few, uh, ethical lapses—most seriously, former premier Dalton McGuinty’s chief of staff David Livingston was recently sentenced to four months in jail for ordering the deletion of pre-election gas plant emails.

Ford’s offside remark, akin to chanting “lock her up” to the crowds: “If Kathleen Wynne tried to pull these kinds of shady tricks in private life, then there would be a few more Liberals joining David Livingstone (sic) in jail…Ontario deserves answers about how big Kathleen Wynne’s mess really is.”

If you were expecting fights in the stands and red baseball hats shot from T-shirt cannons, I am sorry to disappoint. Needless to say, promising to hire an auditor after a change in government is hardly radical; the Liberals themselves did the same in 2003.

Plus, when one of your party’s former chiefs of staff is actually sentenced to actual prison, allusions to jail might be something you’re going to have to eat with a little grace on the hustings.

Ford has a history of running his mouth, which is why I don’t expect he’ll be given much leash on the campaign trial. A recent example; after Ford skipped the Black Community Provincial Leaders debate earlier this month, he defended himself by saying:

I will defer to the many other commentators more qualified than myself to dissect the many degrees of problematic in these statements. However, what I fail to see here are comments painting ethnic groups as rapists or drug dealers. There are no calls to build a wall. No mass deportation.

At the risk of setting far too low a bar, Doug Ford does not appear to be fundamentally motivated by the same kind of racial animus that imbued Donald Trump with such dark power. A vein of populist fear and anger may run deep in the Earth between our two countries. But Conservatives here long ago learned to find allies among people of colour who share common fiscal and social values. They also learned in the last federal election that playing overtly to the politics of white grievance is a good way to destroy the coalitions necessary to win in our political system.

What fear I have of Ford is not that he is Donald Trump with a side of maple syrup, but rather that he is peddling simplistic fixes for all that ails. Ontario is now spending $12 billion a year in debt interest repayments. Wynne has brought the province back into deficit spending in a bid to buy votes ahead of the election.

How can this be rectified, according to Ford? He will find the waste. Which waste? Where? What programs can and should be cut? Who knows?

Cut the carbon tax and leave a hole in the platform the PCs spent 18 months creating? Sure. Federal backstop? What federal backstop?
How will Ontario fix the Liberals’ catastrophic Hydro Hindenburg? Reduce bills by, on average, 12 per cent for ratepayers. Fire the CEO. It will feel good, if nothing else.

Ford doesn’t seem to have a clear vision for what he wants to do in power. His platform seems to be an ad hoc mix of gut response and positions stolen piecemeal from the platform of his predecessor. I’m not convinced he seems to have a perfect notion of what being premier even entails.

But I’m not sure he would be an apocalyptic choice, either.

Would putting a stop to some of Wynne’s lavish pre-campaign deficit spending promises—including popular items like free pre-school childcare—really be a disaster in a province that is already more than $300 billion in debt?

Ford’s opposition to carbon taxes is unlikely to go anywhere; likewise, the fact that he would “welcome” legislation that demands parental consent from underage girls and women seeking abortions is a truly idiotic idea. And it will last exactly three seconds in the face of a charter challenge. It’s bluster.

Cutting corporate taxes; opening up the greenbelt for more housing; opposing the minimum wage. Oppose these positions, fine, but we’re now in the realm of standard conservative policy fare.

When contemplating his worst alleged failings—that he’s dishonest, a bully—I think it’s fair to suggest that Ford comes across as clumsy and ignorant on matters of race, in particular. But the unenviable question before the Ontario voter is this: How much worse could any of this be than the status quo? What is Ford’s record in the face of Ornge, e-health, and the gas plant scandal?

In the now immortal words of Liberal campaign co-chair David Herle: “I think people think Doug Ford’s a bit of a dick, to be honest.”

Ontario, your choices are before you.